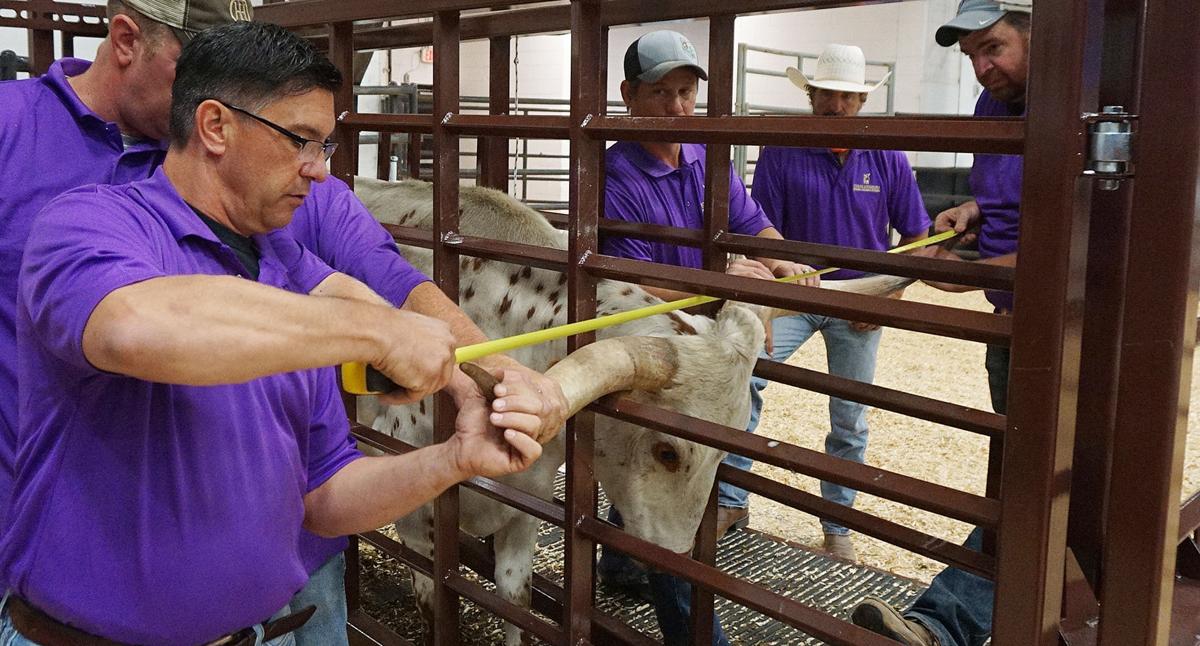 Russell Fairchild, chairman of the horn measuring committee for the 2020 Horn Showcase, measures one of the Texas longhorn bulls Friday for a 65¾-inch hornspread and weight of 925 pounds. 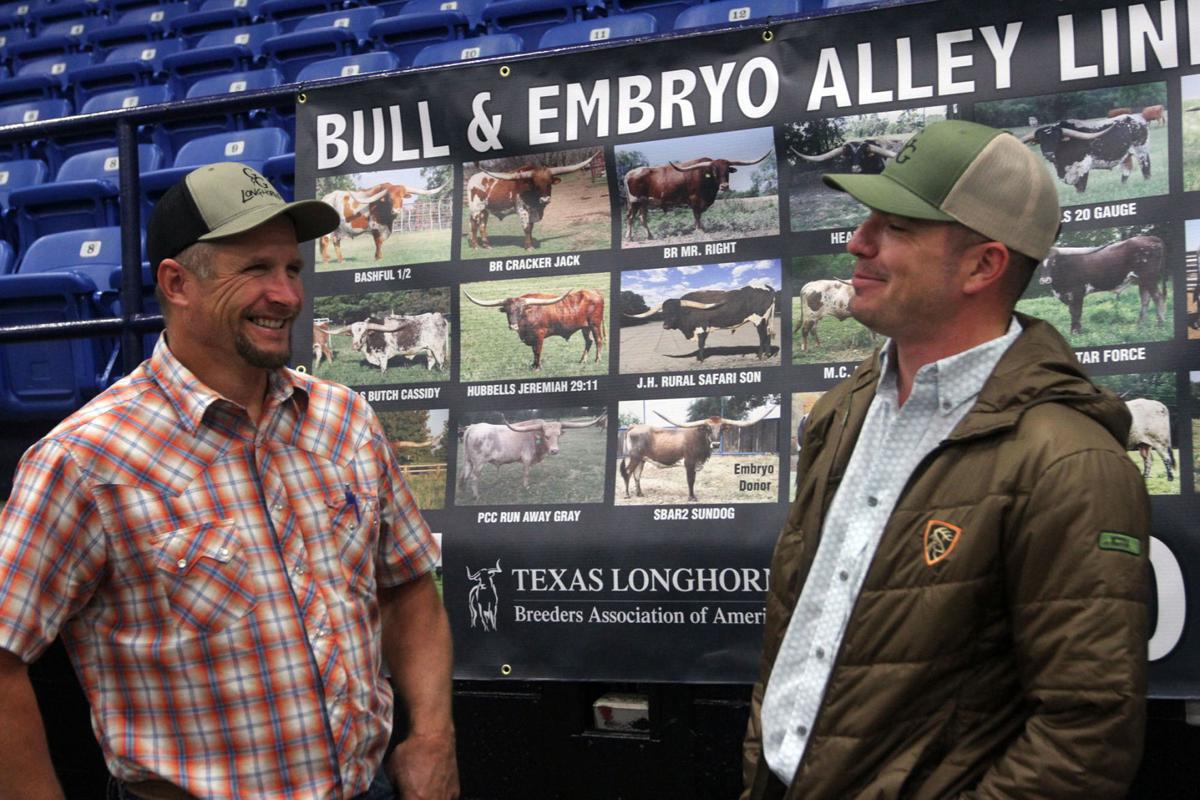 Shawn Pequginot, left, and Bear Davidson, the farm and ranch managers, respectively, of G & G Longhorns, Rochelle, Va., check out the 2020 Horn Showcase Friday at the Comanche County Fairgrounds. A native of Chandler, Okla., Davidson grew up in the Texas longhorn industry.

Russell Fairchild, chairman of the horn measuring committee for the 2020 Horn Showcase, measures one of the Texas longhorn bulls Friday for a 65¾-inch hornspread and weight of 925 pounds.

Shawn Pequginot, left, and Bear Davidson, the farm and ranch managers, respectively, of G & G Longhorns, Rochelle, Va., check out the 2020 Horn Showcase Friday at the Comanche County Fairgrounds. A native of Chandler, Okla., Davidson grew up in the Texas longhorn industry.

Oklahoma native Bear Davidson says he and his teammates in the Texas longhorn industry consider themselves “super-fortunate” to be living the life they’re living.

He was born at Chandler and has been around longhorns since he was a small boy. His dad, Bill Davidson, worked as ringman for Eddie Wood of Wynnewood, longtime auctioneer for the yearly “WR” sales conducted at the Wichita Mountains Wildlife Refuge.

“On the day I was born my dad dropped my mom off at the hospital and then came to the ‘WR’ sale to sell cows. My dad was a ranch manager. I grew up in the industry,” said Davidson, who’s now 36.

Wood was a familiar sight at the refuge corrals for both the longhorn and bison auctions. His two ringmen would spot bidders and relay the information to Wood, seated before his mic up in the announcer’s booth.

“Eddie’s my godfather,” Davidson said. “He’s a legendary auctioneer in our industry. The TLBAA does a sale for him in December named the Eddie Wood Classic, soo he’s still renowned.”

Both Wood and his father are gone now, but Davidson is carrying on his father’s legacy by performing the same job his dad once had – ranch manager for G & G Longhorns of Rochelle, Va. Davidson applied for and got the job in 2009, when he was 24. Two other ranch managers served in between Davidson and his father.

G & G Longhorns is one of the biggest ranches in the United States. Davidson manages the operation for owner Ann Gravett. She and her late husband got into the business in 1989. Davidson’s dad ran the ranch in the late ’90s, and Davidson worked for the Gravetts when he was a teenager.

Two other ranch managers served in between Davidson and his father. Davidson was attending college, and his dad kept calling him, telling him, “Hey, G & G needs a new ranch manager.”

“I had a painting business at the time, and I told my dad, ‘Hey, look, business is good, my business plan’s working.’ My goal was to be the ranch owner. I didn’t want to be the guy that worked for a ranch. And finally, one of my mentors going through college had called me. His name was Rob Finzen, and Rob said, ‘You need to go talk to G & G, like this is a good deal,’” Davidson said.

Davidson had worked the Gravetts’ auctions while he was in college, and he would buy a heifer from them and sell it in the spring to help pay for school. He earned a degree in marketing from Westchester University in Pennsylvania.

After interviewing with the Gravetts in May 2009 he knew he wanted to work for them, but he was working under contract at the time and had to finish that before he could rejoin them in August 2009. He’s been there ever since.

“I love it. Everybody asks what do you want to do when you grow up? Every little boy wants to be a cowboy, right? And I get to do it every day. This is my dream. I can’t believe they pay me to do it. I have a consulting company … I get to work with people all over the country. We get to run cows. We have a budding meat business now, longhorn beef’s taking off for us …

“Right now we’re running about 150 cows. We actually have a sale in Grapevine, Texas, next weekend. We have a sale company. We have a big beef business, and we run longhorns there as well,” Davidson said.

The longhorns in that sale will actually be brought into the hotel ballroom for the inspection of the bidders.

Davidson and farm manager Shawn Pequginot drove out to deliver cows in Texas and Oklahoma, and then they came to Lawton for the 2020 Horn Showcase and all the fellowship. Pequginot will fly home, and Davidson will stick around to meet his “boss lady” when she flies out for the Legacy Sale next weekend. 3S Danica, the cow that made the Guinness Book of Records for having a tip-to-tip hornspread measurement of 104.3750 inches, sold there last year for $380,000.

The audience for the Horn Showcase runs the gamut from old hands like Davidson to newcomers who are just getting their feet wet. This is the first year that the family of Jonathan and Barb Richway and their son, Mitchell, drove down from Kent City, Mich., to check out the Horn Showcase. They own Richway Ranch, but they were not raising cattle until they got into Texas longhorns.

“We’ve just always wanted to raise cattle, and with work we moved to Texas for a couple of years. We fell in love with the longhorns and talked to some other breeders in Texas, and we relocated back to Michigan,” Jonathan Richway said.

They lived in Bridgeport, Texas, northwest of Fort Worth, and they frequently visited the Fort Worth Stockyards. What the Richways liked about the longhorns they saw was, “They’re so graceful. They’re beautiful. Every one’s different. No two are the same. That’s what makes them so unique, and that’s just what we fell in love with – the different variations of colors, the oddities of the horns – so we wanted to be a part of that,” Jonathan Richway said.

“Right now we’re just playing with the genetics and seeing what we can get for horns and for color,” he said.