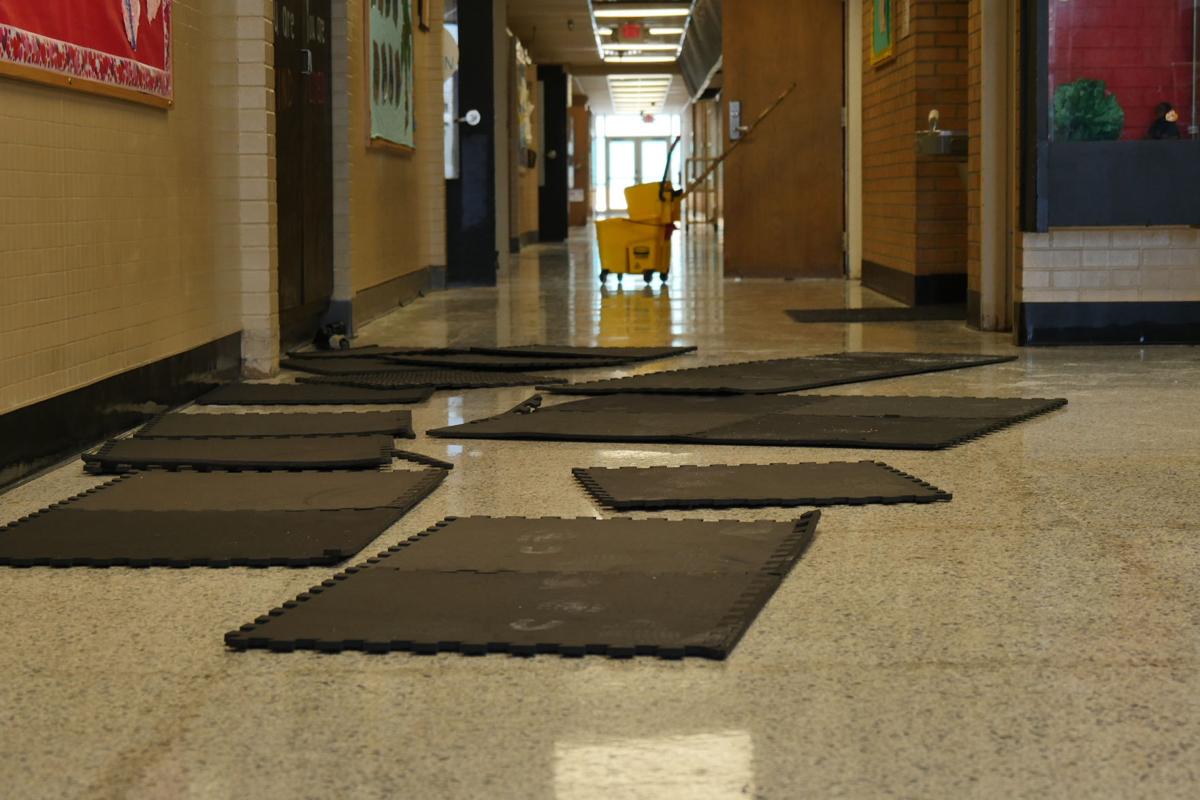 Mats lay in the hallway drying, as Lawton Public Schools staff continues efforts to dry out the floor in Edison Elementary School after a broken waterline flooded the structure. The school is one of several damaged by water due to the city’s extreme cold last week. 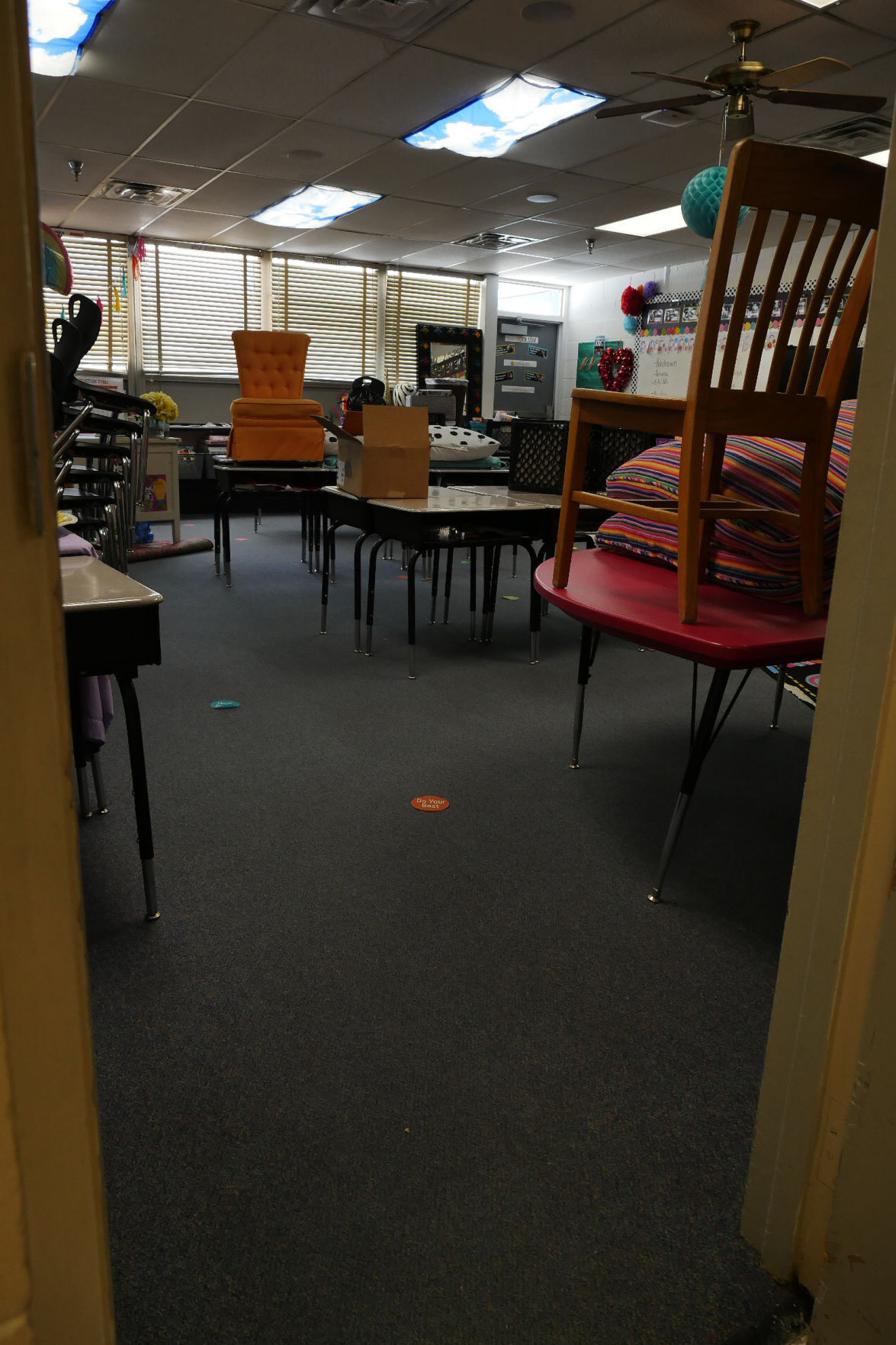 Furniture, boxes and other materials crowd the table tops at Edison Elementary School Friday, as the school continues efforts to dry the floors in its classrooms.

Mats lay in the hallway drying, as Lawton Public Schools staff continues efforts to dry out the floor in Edison Elementary School after a broken waterline flooded the structure. The school is one of several damaged by water due to the city’s extreme cold last week.

Furniture, boxes and other materials crowd the table tops at Edison Elementary School Friday, as the school continues efforts to dry the floors in its classrooms.

Winter precipitation and crippling cold kept students out of in-person classes last week, but the district also found another problem after the snow stopped: schools damaged by water. Superintendent Kevin Hime said LPS administrators already had made plans to designate Monday as a virtual day for everyone while the district held its COVID-19 vaccine distribution program for teachers and staff. So, it was just as easy to extend virtual classes through Monday, giving the district staff time to clean up messes caused by the winter weather.

Hime said the damage ranges from minor to a school-wide flooding at Edison Elementary School.

At MacArthur High School, the waterline to a water fountain burst.

At MacArthur Middle School, a waterline break by the library flood some classrooms and the library, and there is an “outside chance” it will be fixed by Tuesday.

“Obviously, that’s our goal,” Hime said, adding that if repairs extend beyond Monday, it is easier to extend another day of virtual school for students of that age.

The problem was more severe at Freedom Elementary School, where a check revealed a sprinkler head in the fire suppression system had broken, releasing all the material all over the school. That work has begun and Hime said district staff “feels pretty good about the cleanup,” although they are concerned about the gym floors. But, there is another issue for this cleanup project that has district officials concerned about meeting the Tuesday reopening date: because it involved the fire suppression system, there is an administrative process for a certificate of occupancy from the fire marshal that must be completed.

“The company is confident they would have it recharged by Tuesday,” Hime said.

LPS’ most severe problem is at Edison Elementary School in northwest Lawton, where a major waterline break damaged floors in every classroom.

“We may have to replace every classroom flooring,” Hime said of a cleanup process that started with drying out the floor, then analyzing options.

Those options mean deciding what to do with students and staff if they can’t get the school ready by Tuesday or beyond that date.

Hime said the damage to schools is directly related to last week’s temperatures. The district has a winterization strategy for its buildings, and school custodial staff check on buildings during extended closures to catch any problems that may arise. But, there are still issues in a district with buildings of various ages. Hime said walls in older buildings may not have as good insulation as those in more modern buildings, and many of the waterlines in schools are in the ceiling.

Other issues may have been traced to problems with power and gas provided to the buildings, and human error may have been an issue (a leak that had been fixed, but someone forgot to put insulation back in, for example).

“We’ll look at it and evaluate. But the bottom line: no one expected it to be in the sub-zero temperatures for three to four days,” Hime said. “We didn’t build anything for sub-freezing for this length of time.”

Hime said he doesn’t expect other problems to crop up, explaining it’s warm enough in buildings to balance the cold temperatures outside. The staff also is checking buildings closely and staff thinks they have discovered all of the problems.

The configuration of the district means the problems of one building won’t affect other school sites that are in good condition that are ready to open.

“By Tuesday, we’ll have most of them ready to go,” Hime said, adding the problems to work around will center on Edison Elementary School and MacArthur Middle School.