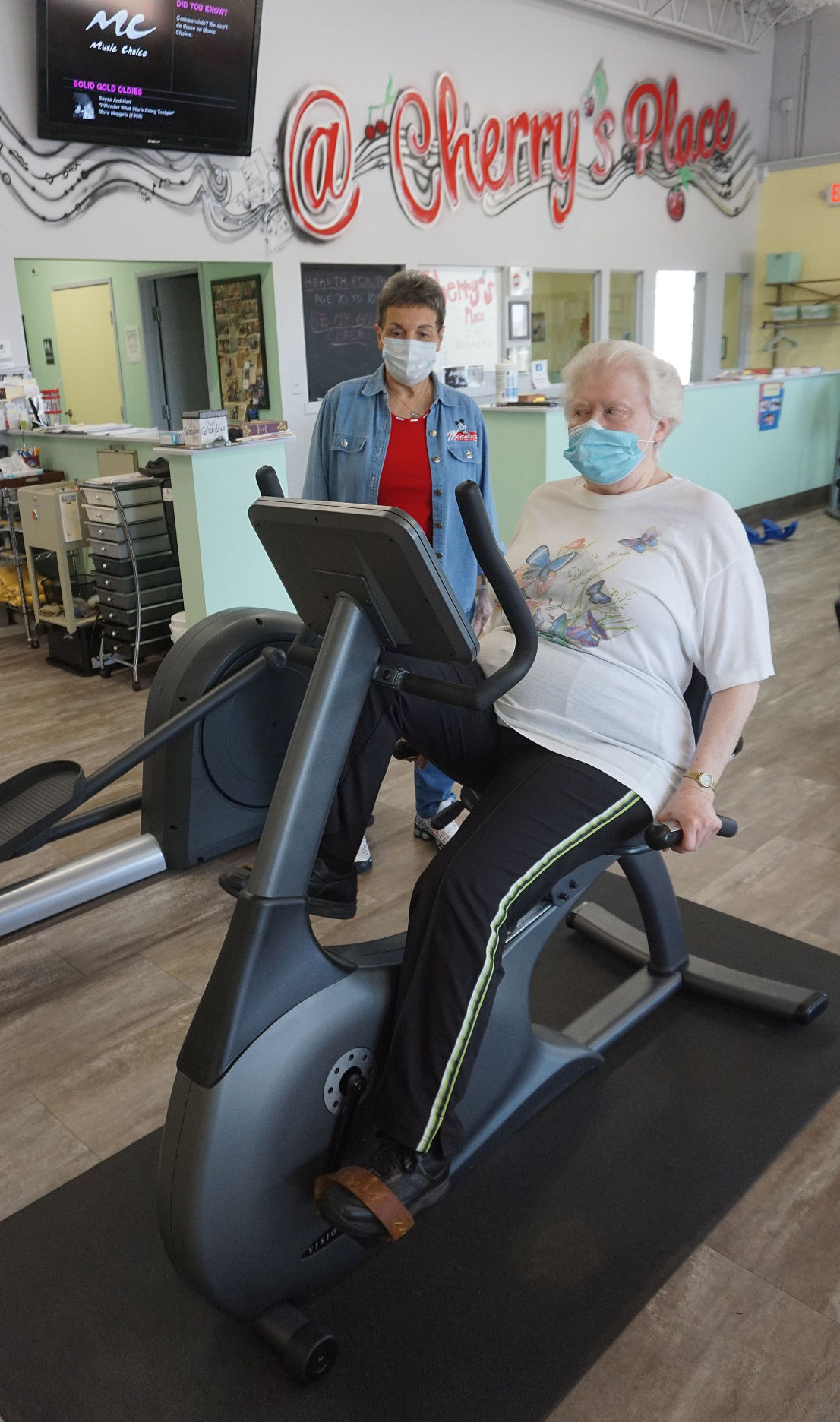 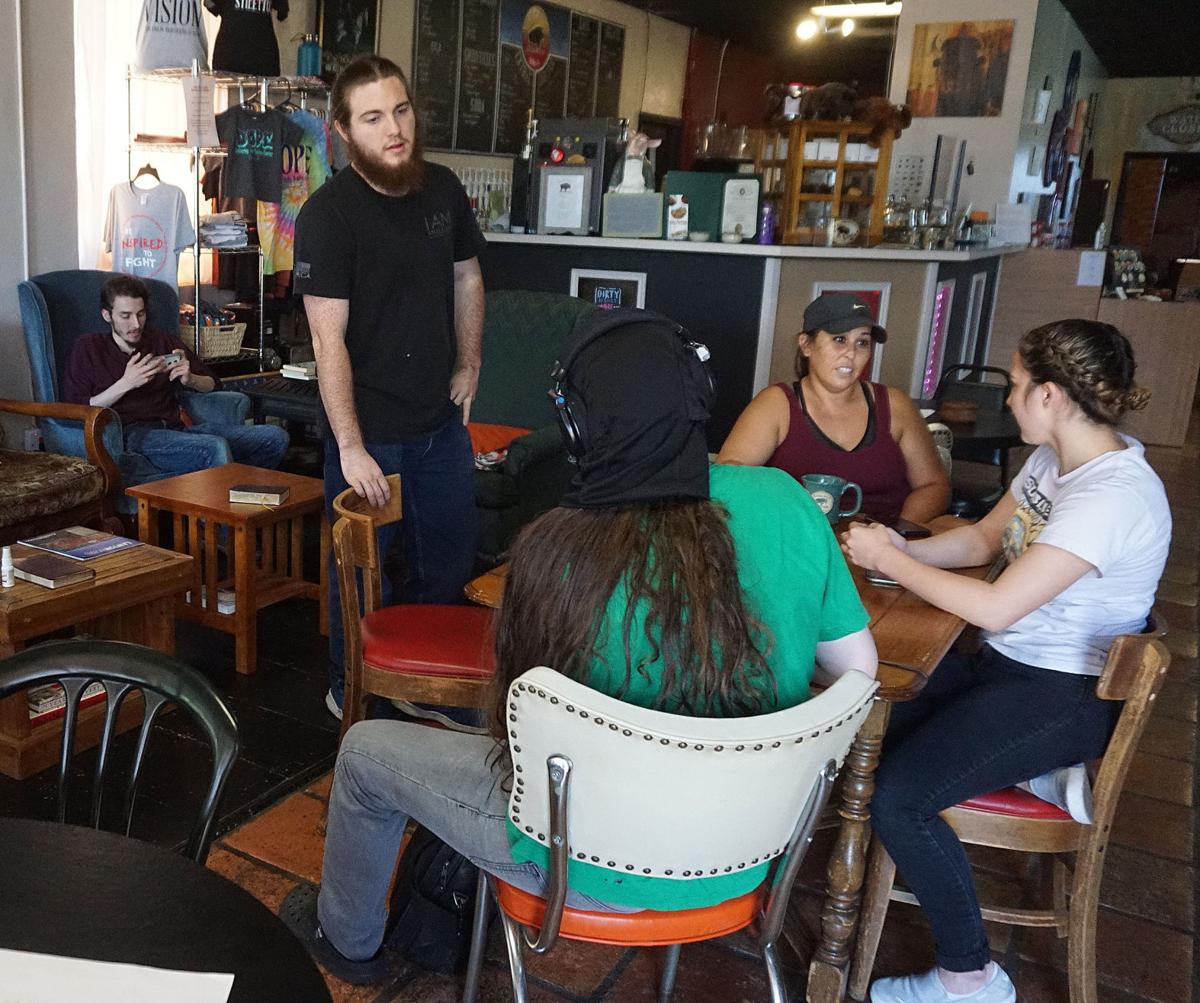 James Rose, standing, talks to patrons at the Buffalo Grove Coffee Company. Business owner Kandi Roeske said she believes residents should be free to chose whether they will wear masks while in public. 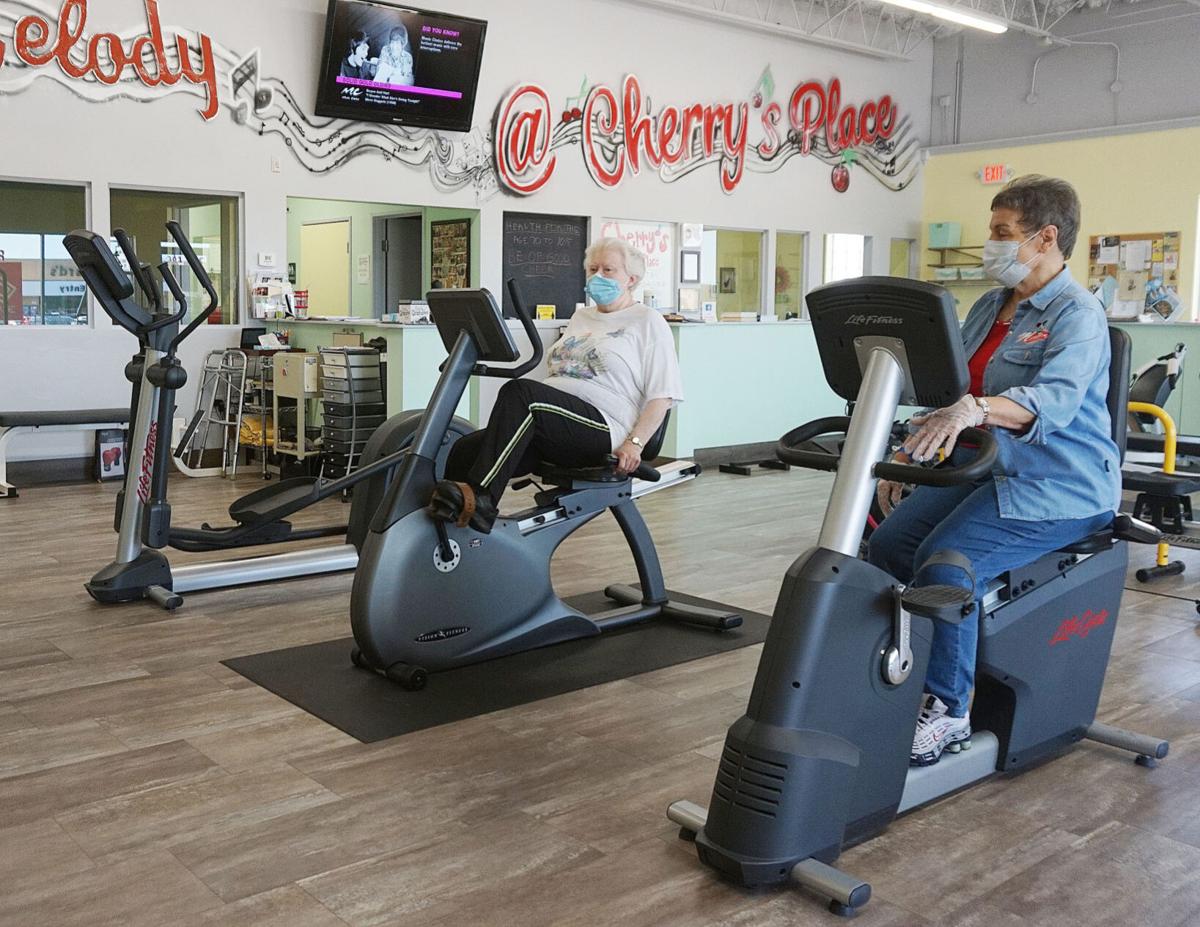 Nancy Brooks, left, and Cherry Phillips both wear masks as they exercise at Fit For Life.

James Rose, standing, talks to patrons at the Buffalo Grove Coffee Company. Business owner Kandi Roeske said she believes residents should be free to chose whether they will wear masks while in public.

Nancy Brooks, left, and Cherry Phillips both wear masks as they exercise at Fit For Life.

A mask mandate that the Lawton City Council put into place July 17 is drawing mixed responses from residents and businesses.

The ordinance requires facial coverings while inside a commercial entity or other public building, structure or space open to the public, and on mass transit. It followed on the heels mask mandates already imposed by governmental entities for their facilities (including Lawton City Hall) and by some “big box” businesses for their customers, to include Walmart, Target and Kohl’s.

Sylvia Burgess, interim president of the Lawton Fort Sill Chamber of Commerce, said at a July 17 council meeting that some small businesses were reporting that customers are afraid to come in because they are afraid of being around those who will not wear masks. Business owners and others who attended the July 28 council meeting to urge repeal of the mandate said they are hearing the opposite: some residents are reluctant to come into public because of the mask mandate, while out-of-town visitors are skipping Lawton and taking their shopping dollars to communities without a mandate.

They also were critical of a letter the mayor and city manager sent a letter to local businesses last week, asking them to partner with the City of Lawton for the mandate, “politely” reminding patrons of the mask requirement as customers approach the business or when they are found inside a business without masks. The letter also asks businesses to ask for doctor’s notes from those who say they cannot wear masks, and to refuse service to those defying the mask ordinance.

Kandi Roeske, owner of Buffalo Grove Coffee Company, was among those who urged the council to drop the mandate, saying that wearing masks should be voluntary. Roeske said she doesn’t agree with the mandate and won’t enforce it, and isn’t the only business owner in town who feels that way.

“It violates ethical and legal things, in how a business is run,” she said, adding her feedback from customers has been positive. “I will not become an agent of the city and ask anybody to wear a mask, because their mandate is illegal and if I do that, that makes me liable.”

“If they are concerned about their health, by all means, feel free to wear a mask,” she said. “I absolutely don’t believe you should refuse to provide service.”

Roeske said business owners already have their own protocols and rules they enforce for customers. For example, she said if she has a customer who becomes unruly because he was not wearing a shirt, she might order him to leave and threaten to call the police, or, more likely, she would serve him a beverage so he would leave. Calling police for every violation of the mask mandate isn’t feasible, she said, because Lawton police are busy with other things.

As for her business, Roeske said she already engages in sanitation protocols because food and beverages are being served, but also because she wants to protect her customers.

“We’ve always gone above and beyond what is required,” she said, adding most small businesses do the same thing because they place a high value on their customers.

Roeske said the business community is split on the issue, explaining half are concerned about enforcing the mask mandate because of threats from customers and half are afraid of the city “shutting them down” for not enforcing it.

“If people were free to make that choice, it would not have been an issue,” she said.

Darren Medders, owner of Darby’s Furniture, said his store hasn’t had any issues with the mandate, estimating 90 to 98 percent of his customers are wearing masks when they come into the store.

“There are a few that come in from out-of-town and don’t realize it,” Medders said about the mandate. “We have masks at the front that they are more than welcome to have. If they don’t have it, we’ll give them a mask.”

Medders said because his businesses hasn’t had any issues with customers, he hasn’t had any problems enforcing the directive. As for himself, Medders said he understands the city’s concerns. Darby’s was among the businesses deemed “non-essential” when Lawton came under a civil emergency mandate in March that closed non-essential businesses. He said while he could have challenged that mandate, arguing he was essential, he was concerned about his employees and the effect COVID-19 might have. So, he closed both the Lawton store and the company’s original store in Duke.

“I have some older staff, so that’s why we decided to close for the time,” he said, adding the store reopened in June when it was deemed to be safe. “It’s new territory, every day. But, it’s hard to rebuke. There’s a lot of sick people out there.”

“There still are people out and about,” he said. “We’ve not seen a decrease in traffic.”

Cherry Philllips, owner of Fit For Life, admits to mixed feelings about the mask mandate. Personally, she believes strongly in masks and wears one whenever she is out, and wears masks and gloves while at her business. But, as a business owner, the thought of ordering someone out of her business gives her pause.

The masks do present challenges, said Phillips, who works with older residents and those with health problems — both at risk populations — to provide the exercise regiment that will restore them to health or keep them healthy.

“It creates issues with breathing capability,” she said, noting that using the cardio machine is difficult for some clients while wearing a mask.

She includes herself in that number. Phillips said while she is getting used to wearing the masks for daily activities, wearing one while exercising can be a challenge (which is why she permits clients to slip off their masks while on the cardio-machine).

“I have a lot of clients with breathing problems: emphysema and COPD. I pay attention because it is a big issue,” she said.

Then, there’s the practicalities of wearing masks with elastic loops that catch on hearing aids and earrings.

“The hearing aides flip right out,” she said, of styles that protrude slightly from the ear canal.

Phillips made the commitment to masks and stricter sanitary protocols when she reopened. She provides advice and materials for those who come into the facility, and does things such as taking and logging temperatures, and cleaning equipment religiously, actions that come with a cost that she didn’t factor in when creating this year’s budget. Phillips said she had pushback from only two clients who didn’t like someone telling them to wear a mask, but both agreed to do so.

She said she hasn’t yet faced the challenge of someone coming into her business without a mask. As a business owner, she said it goes against the grain to make someone who wants to do business leave because they are not wearing a mask. But, she also admits that she feels more comfortable when frequenting businesses with mask mandates, such as a local clothing store where employees and shoppers all wear masks.

“I felt very comfortable and safe,” she said, adding the atmosphere was set by the employees. “Customers do notice if you wear a mask.”