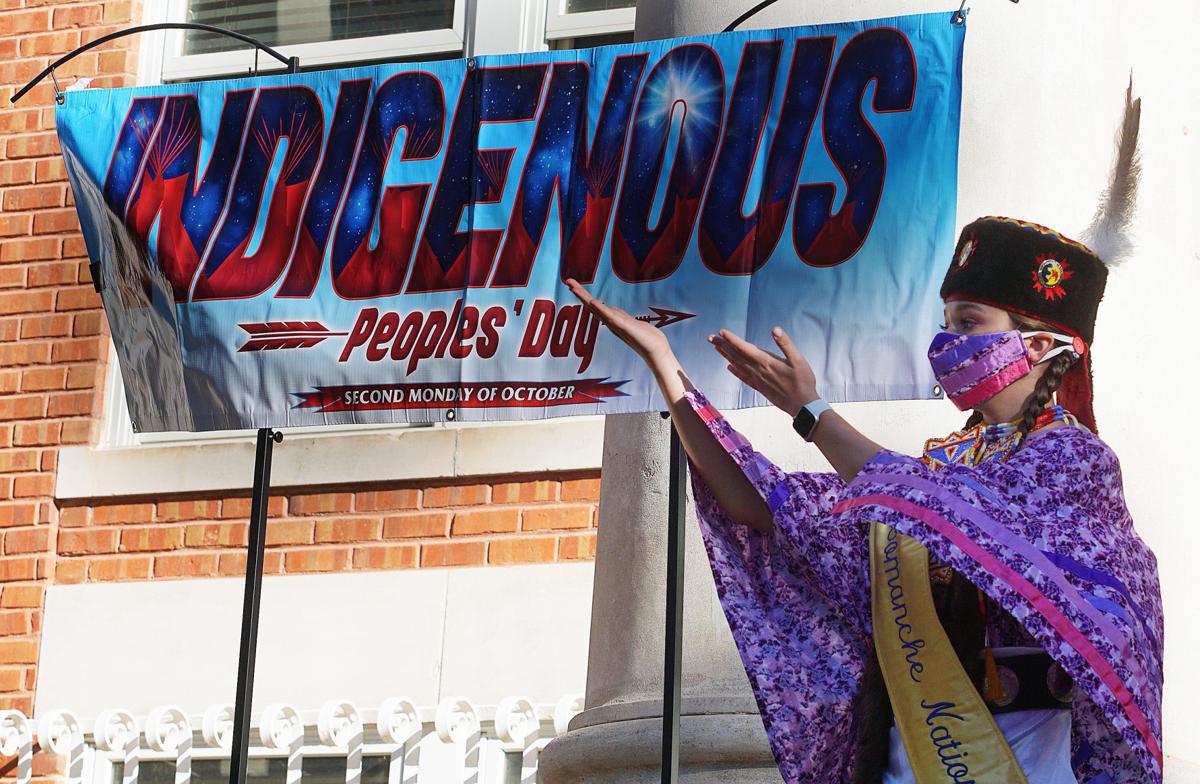 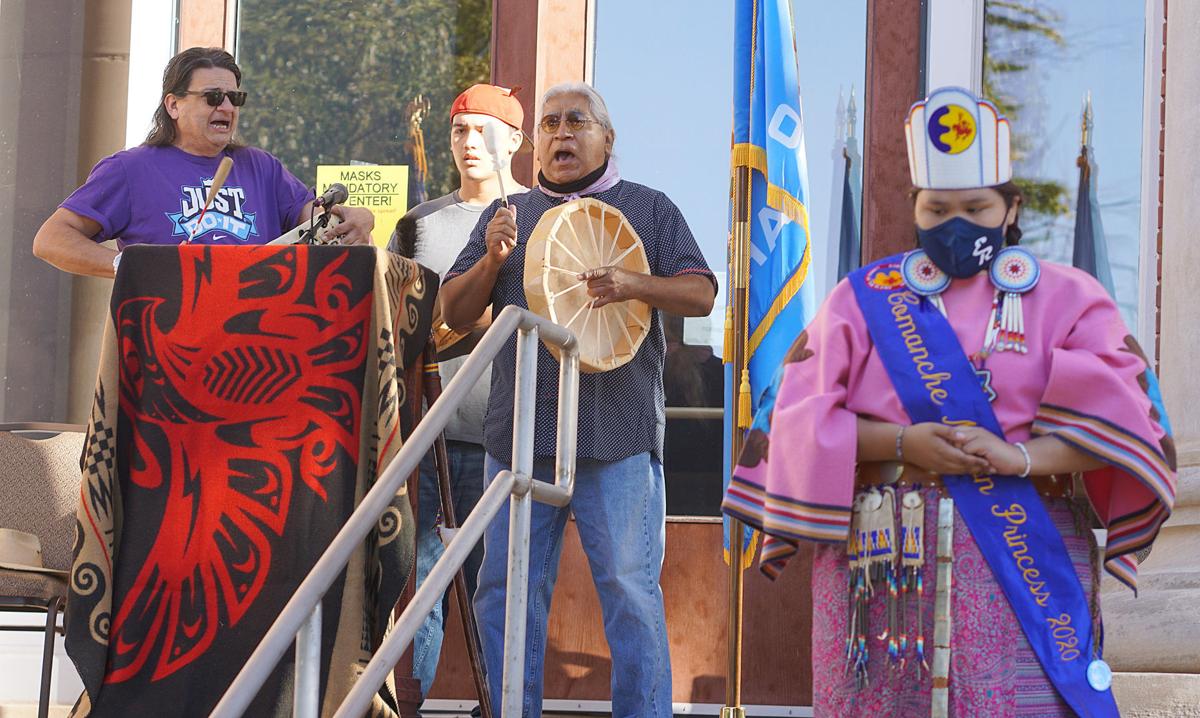 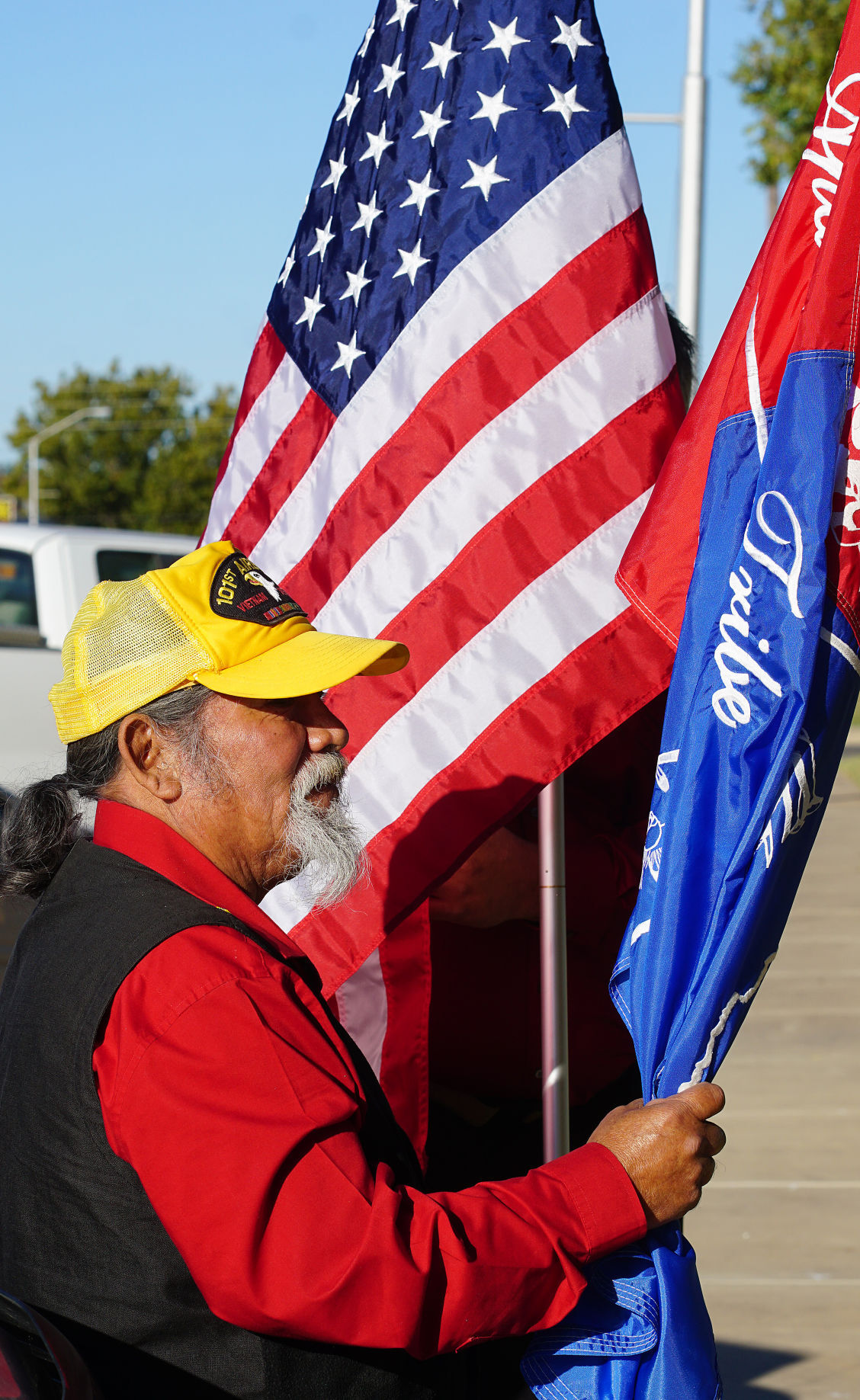 Richard Banders, holding the Comanche Nation flag, gets ready to post the colors for the opening ceremony of the third annual Indigenous Peoples Day held at the Lawton City Hall.

Richard Banders, holding the Comanche Nation flag, gets ready to post the colors for the opening ceremony of the third annual Indigenous Peoples Day held at the Lawton City Hall.

The City of Lawton celebrated annual Indigenous People’s day, Monday. The celebration marked the third since Lawton City Council passed a resolution in 2018 recognizing Indigenous Peoples’ Day on the second Monday of October each year.

This year’s events began on the southside of City Hall before moving to Elmer Thomas Park in the afternoon. The events, which included a speech from Mayor Stan Booker, songs and discussions about Native American education and studies. The event is intended to allow the Native American people to share their narrative and educate children and the community to complete what has often been an incomplete history of the United States and the land from which it was born, according to Cornel Pewewardy, event coordinator. It begins by taking the national holiday, Columbus Day, and opening eyes to what that means to Native Americans.

Over 130 cities and 14 states across the country have elected to celebrate Indigenous Peoples Day as an alternative to—or in addition to—Columbus day, with Lawton joining the movement after passing a resolution in Oct. 2018.

“Today is meant to augment Columbus Day,” Pewerardy said. “To not only tell the story of Columbus from our perspective, but also tell about our resilience and why we’re here. We’re reclaiming our voice, our history, but we’re not discarding Columbus. This is to talk about what that history was but we also teach it from our perspective, which is a whole different paradigm shift.”

Columbus day is a relatively new holiday, enacted by President Franklin D. Roosevelt in a 1934 decree. However, during the 1980s, Colorado’s American Indian Movement chapter began protesting the celebration of Columbus Day. In 1989, activists in South Dakota persuaded the state to replace Columbus Day with Native American Day. Both states have large Native populations that played active roles in the Red Power Movement in the 1960s and 1970s, which sought to make American Indian people more politically visible.

Then, in 1992, at the 500th anniversary of Columbus’ first voyage, American Indians in Berkeley, California, organized the first “Indigenous Peoples Day,” a holiday the City Council soon formally adopted. Berkeley has since replaced its commemoration of Columbus with a celebration of Indigenous people.

Julian Guerrero Jr. Director of the Office of Indian Education at the United States Department of Education was the keynote speaker for the day’s celebrations.

“Today is very important,” Guerrero said. “I can tell you that all communities especially indigenous communities want to raise more awareness for indigenous issues and indigenous visibility. Symbolically it’s not only important but I think it gives us a platform and a forum for talking about our history, living history and the future of indigenous communities. All in all it’s a great opportunity to kind of have more in depth conversation.”