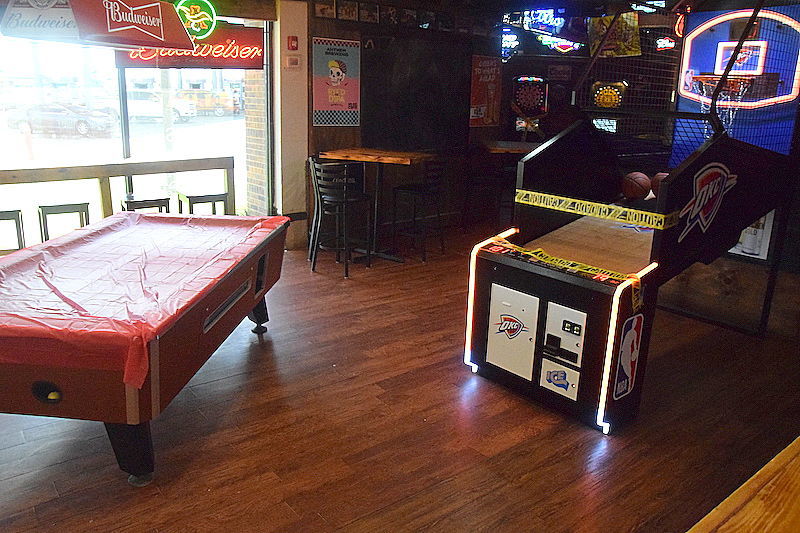 The games remain closed off to patrons at Red Dirt Reloaded and other local bars as part of the City of Lawton’s guidelines for their reopening today. 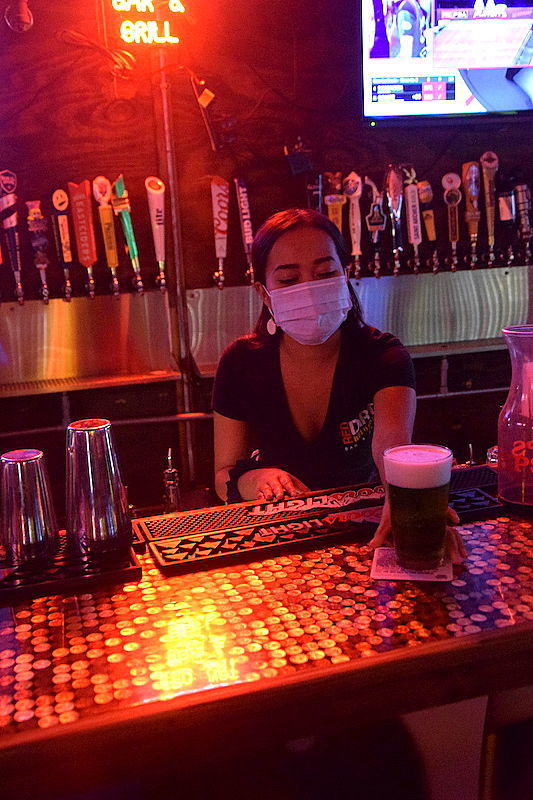 Red Dirt Reloaded bartender Nikki Nakasome serves up a freshly filled glass of beer. She’ll be one of many masked bartenders earning their tips tonight with local bars being allowed to open. 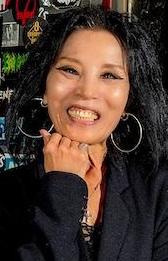 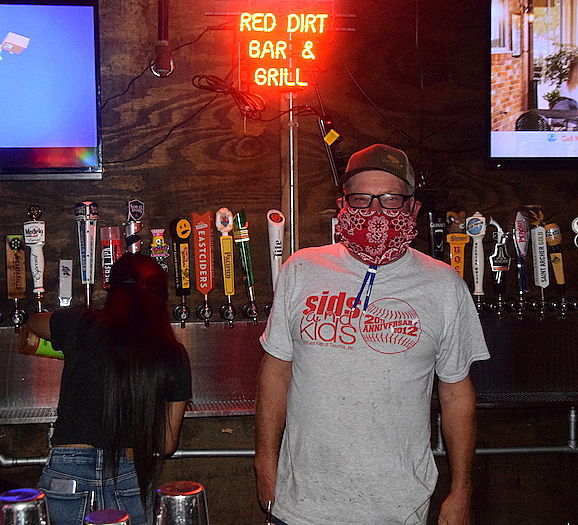 The games remain closed off to patrons at Red Dirt Reloaded and other local bars as part of the City of Lawton’s guidelines for their reopening today.

Red Dirt Reloaded bartender Nikki Nakasome serves up a freshly filled glass of beer. She’ll be one of many masked bartenders earning their tips tonight with local bars being allowed to open.

There will be a deafeningly silent “clink” of glasses and bottles toasting with air tonight as patrons return to their posts of good cheer.

Lawton bars will be filled with the sounds of chatter, laughter and the air of a good time, be it muffled by mask or unabashedly unshielded. For a pair of local bar owners, it’s about time, albeit a new time for the business.

Fabian Turner, owner of Red Dirt Reloaded, said he’s spent the past two months with his restaurant and bar, 6425 Cache Road, closed for business. In that time, he remodeled and hyper-cleaned the kitchen, the front area and the stage areas.

Turner said that during the shutdown, each day closed cost him about $1,100 a day.

Although he’s put in paperwork for some small business relief through the federal government, Turner still has concerns that some of the grant money available will be considered income.

Red Dirt’s employees are making money, Turner said. Since reopening the restaurant portion on May 6, people have been generous with tipping the staff. The masks they wear serve the opposite role of robbers; they provide security to the customers that things are being done right.

Turner said each employee has their temperature checked with an infra-red, no-touch thermometer when they come onto shift. Other safety measures put into place include spacing tables out to fit the social distancing guidelines. While open for dine-in eating, a three-drink maximum was put into place so customers didn’t linger inside too long. Food orders had to be the primary purpose for customers to be there.

“Everybody who comes in orders food,” he said. “They got to eat and they got to go. Until Friday.”

Turner said the opening caught the attention of Mayor Pro-Tem Jay Burk who directed police to inspect the place the following day. He said they checked all of his licenses and paperwork, which are up to date, and found that he was playing by the rules.

“We kind of caught hell on that,” he said. “But the cops came out and checked everything out and said we were doing more than most normal restaurants that don’t serve alcohol.”

Turner knows that half-capacity for his business won’t bring in the money of normal times. But it’s a step toward what he hopes is a return to normal. He said that all bars are struggling and he won’t be surprised if some local bars break the rules pretty quickly.

For Kyong Dees, owner of the Railhead Saloon, 909 S. Sheridan, tonight brings a lot of emotions. She still feels nervous about the COVID-19 virus. She’s a cancer survivor and is among those who can be most susceptible to the roughest times when infected with the virus. But opening is the only option.

“As far as my health situation, still I have no choice but work,” she said. “That is just reality.”

Finding some of the items needed to reopen was tough. Dees said a search all over the city earlier this week was futile in search of gloves and the needed infra-red thermometer. She found someone to loan her the items until her ordered supplies arrive.

With a capacity of just under 200 people, Dees said she and manager Carlos Vissepo decided that a maximum capacity of 30 patrons will be enforced.

Dees said the two months of down time was tough. She had savings but it was becoming stretched. She said she still had to pay rent, utility bills and to make a living herself.

“It was bad, of course,” she said. “We always have to prepare for the worst case. Two months was kind of rough, I don’t know if I’d have made it through three.”

Both, the Railhead and Red Dirt Reloaded are established live music venues. While some bars are opening up their stages, both Dees and Turner said they’re holding off until reduced guidelines are established. With the number of staff, members of bands and their entourages, soundman and doorman, it cuts the customer ratio down and decreases revenue. If she’s not able to make money, they can’t make money, it’s that simple.

“I’m not going to have any bands,” she said. “I’m going to wait until Phase III, then I’m going to start to bring in bands.”

Turner concurred about booking bands until Red Dirt can get back to full capacity.

“Every band means charges piled on by ASCAP, BMI and SESAC (for music licensing),” he said, “and if I can’t pull in full capacity it won’t pay off for me or the bands.”

But when it opens up, Turner said he’s ready to return to hosting live local music performances on the weekends and the first and third Thursday of the month of the Open Mic Night with Big Pete Piehnik. He’s also planning on booking a DJ for weekends. But all this is when the time is right.

One of the busiest men in the area Thursday was Randy Nungesser, a liquor delivery man for Southern Glazer Wine and Spirits, the largest liquor distributor. They deliver about 87 percent of Oklahoma’s liquor to bars, restaurants and stores, he said. During the two-month shutdown, he said the deliveries to liquor stores had multiplied. People were thirsty.

Turner said Nungesser usually shows up around 1 p.m. to make his deliveries. On Thursday it was closer to 4:30 p.m. The distributor said he’s been “very busy.” Opening the bars is a good thing, he said. People are thirsty to get back out and lift their spirits while lifting their spirits.

“That’s what we needed,” he said, “is for people to get back to work.”