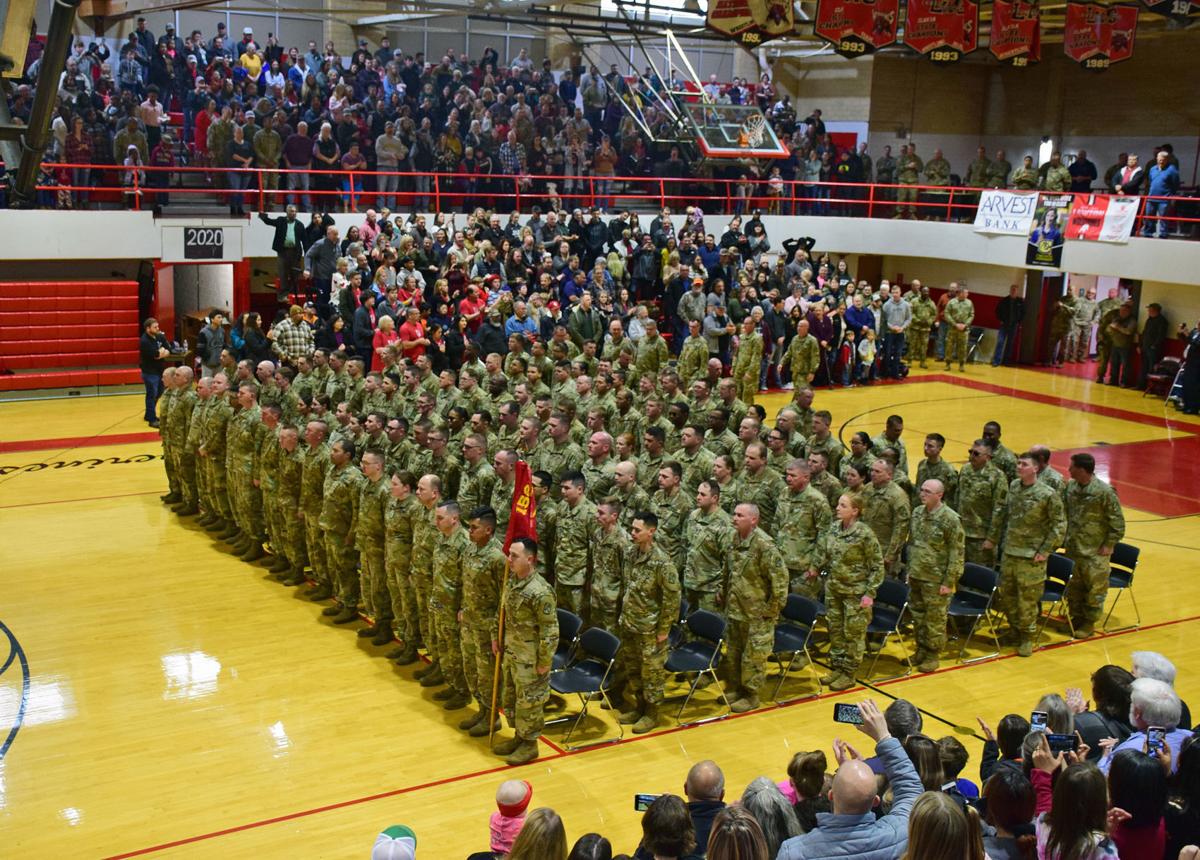 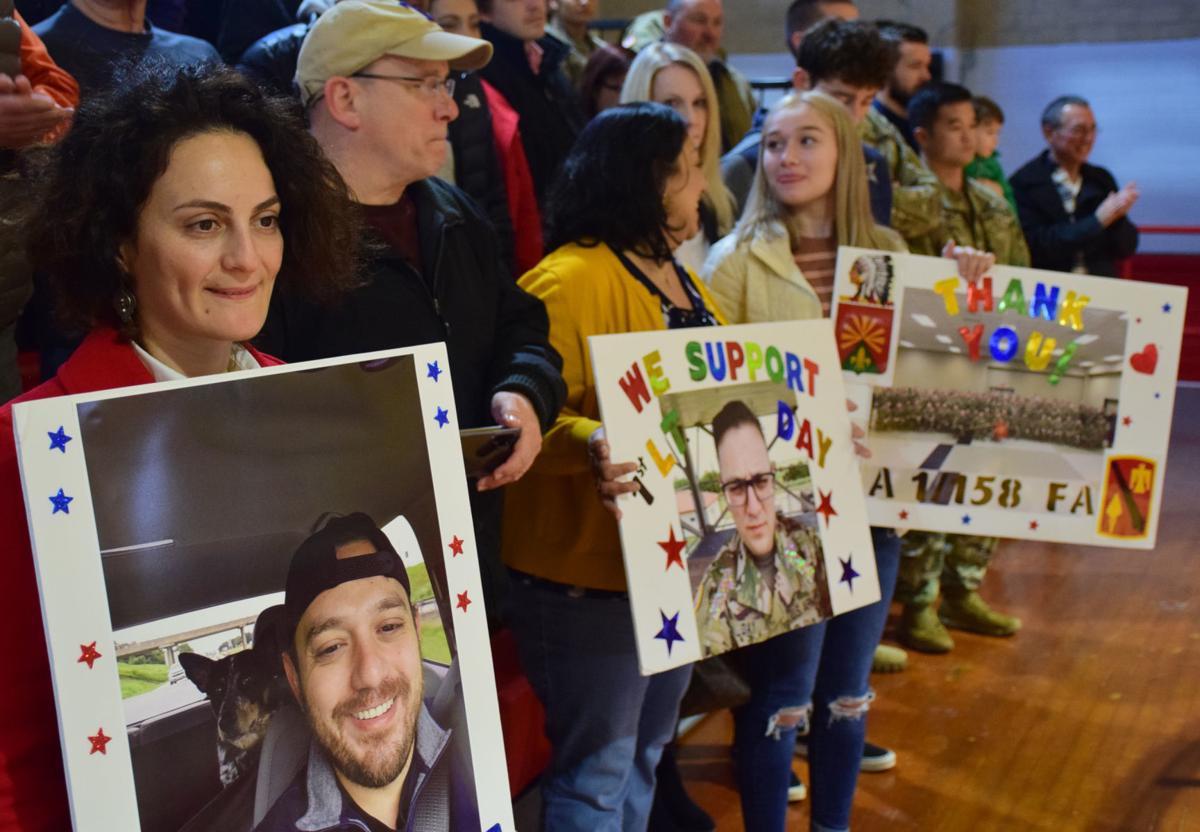 Holding signs for friends and loved ones are, from left, Aynur Alibayova, Geoff Day, Pamela Day and Zara Medina. 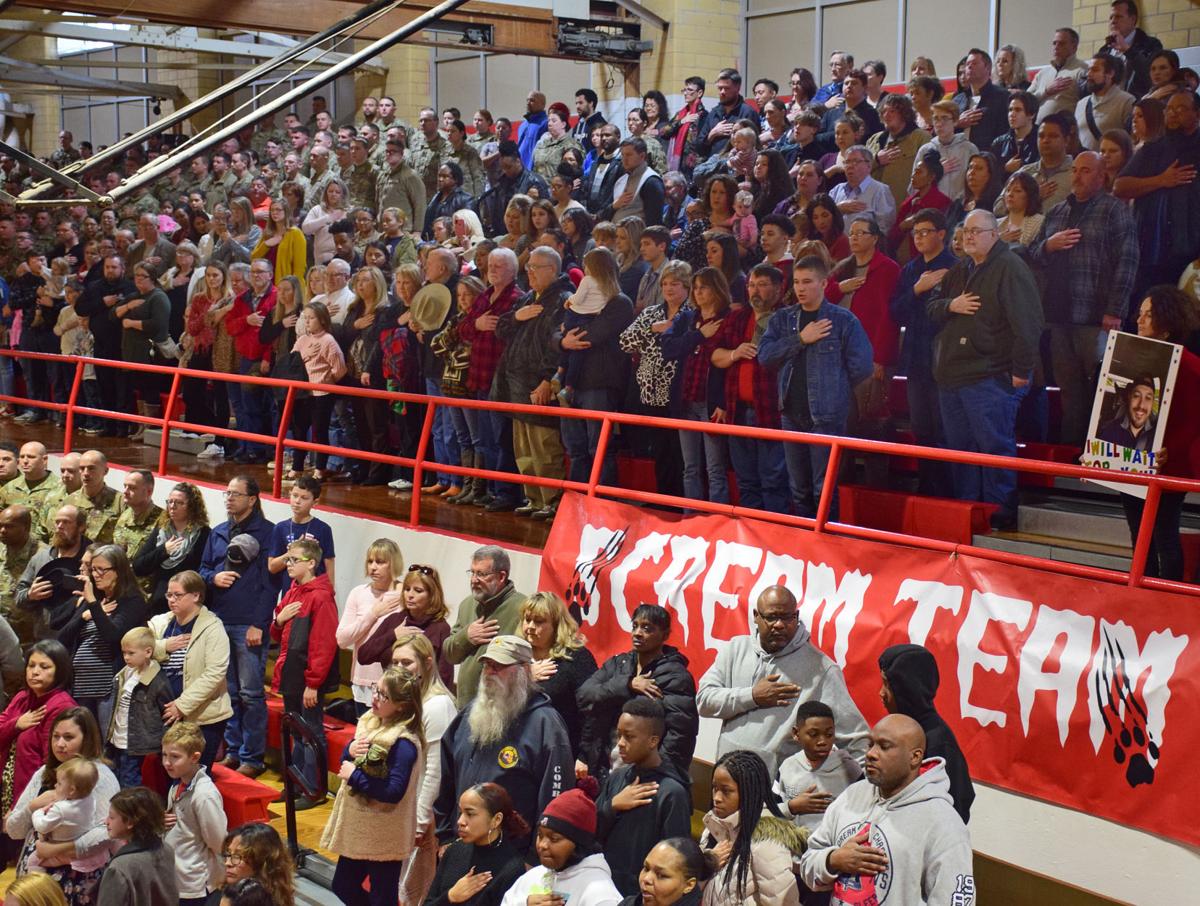 Friends and family of National Guardsmen from Battery A, 158th Field Artillery, stand for the national anthem during Sunday’s sendoff at the Lawton High School Gym. 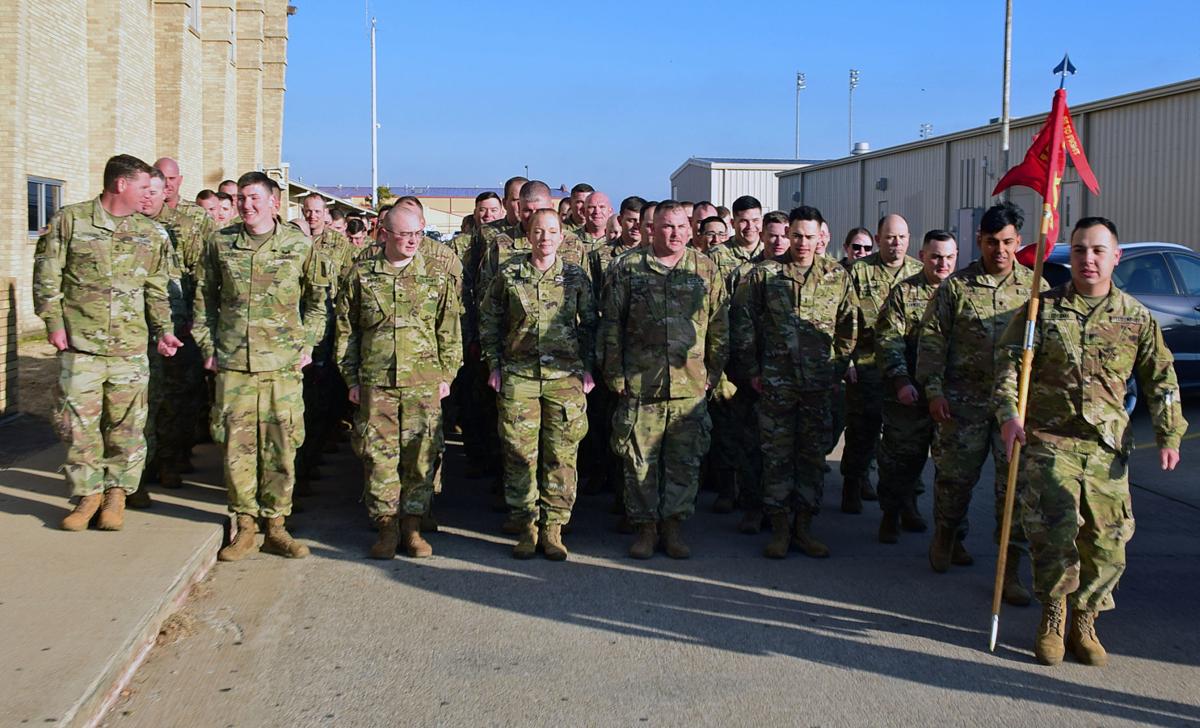 Spec. Skyler Ledesma of Altus carried the guidon of Battery A, 158th Field Artillery, as he leads the unit’s soldiers into the Lawton High School gym. The unit will be headed to Fort Bliss, Texas before being deployed to Kuwait. 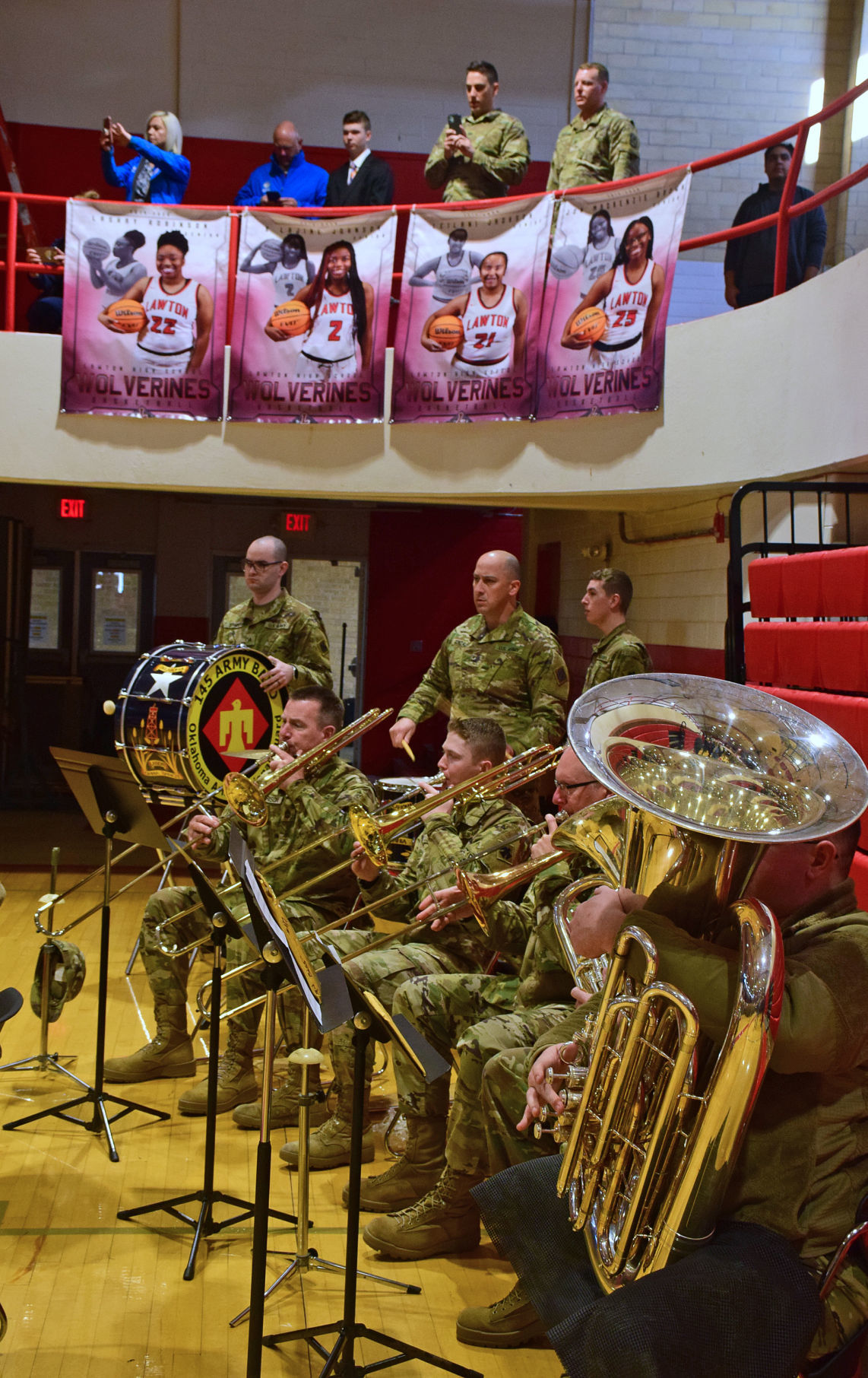 Holding signs for friends and loved ones are, from left, Aynur Alibayova, Geoff Day, Pamela Day and Zara Medina.

Friends and family of National Guardsmen from Battery A, 158th Field Artillery, stand for the national anthem during Sunday’s sendoff at the Lawton High School Gym.

Spec. Skyler Ledesma of Altus carried the guidon of Battery A, 158th Field Artillery, as he leads the unit’s soldiers into the Lawton High School gym. The unit will be headed to Fort Bliss, Texas before being deployed to Kuwait.

Approximately 130 members of this Oklahoma Army National Guard unit are going to Fort Bliss, Texas, for about a month’s worth of post-mobilization training, according to Maj. Geoff Legler of the Guard’s public affairs office.

Once that’s done they will deploy to Kuwait on a fire support mission. 1-158 FA is fielded with the High Mobility Artillery Rocket System (HIMARS), the wheeled version of the Multiple Launch Rocket System (MLRS).

Approximately a year has been allotted for its total deployment time, but their return is anticipated for late fall. The battery’s command team consists of Capt. Jeffrey Morefield and 1st Sgt. Jackie Bruesch.

The ceremony differed in small ways from similar send-offs conducted on post. Because of the narrow doorways the Guard unit had to march into the gym in single file. Instead of standing in formation they sat on folding chairs. Oklahoma Army National Guard’s own 145th Army Band played patriotic music to suit the mood. Inside, family and friends packed the stands. Outside, parking space was in high demand.

Oklahoma’s Adjutant General, Maj. Gen. Michael Thompson, traveled here to recognize the young men and women who will deploy — “some not so young but some not so old, that are going into a really contested area right now.”

Thompson said the Guard has gotten a lot better with deployment ceremonies over the nearly 20-year history of the Global War on Terror.

“When I deployed on my first one in 2002-2003, a number of us met in an old abandoned Walmart,” Thompson recalled.

Thompson thanked the families for coming out to see their soldiers off. He admitted he gets a little emotional hearing the band play as the soldiers march in.

“Think about how much we ask of our National Guard, month after month, year after year, literally almost decade after decade. The Guard has always been an integral part of who we are as Americans. Always. Since 1636. It doesn’t matter how often their call comes (or) how long that call lasts. They always faithfully answer,” the general said.

Thompson declared that the United States Army can’t do what it does without the Army National Guard.

The flip side is that the Oklahoma National Guard can’t do what it does without the backing of those who sign up, he pointed out.

“Where do we get people like that? We get them from college campuses and farms of Wewoka and power plants in Lawton, tire plants in Lawton and police departments. You come from all walks of life to put your personal feelings aside and put this uniform on and go and serve this nation,” Thompson said.

“You truly are America at its best, and we are fortunate to have you,” he told the troops.

Thompson promised to be in El Paso to see A/1-158 FA before it leaves and to be at the bottom of the plane ramp to shake hands with the Guard members when they come back to America.

“Hey, guys, thank you for what you do. Thank you for being that less than 1 percent willing to serve our nation and our state,” Henry said.

“Alpha Battery has always answered the call, has always performed the mission with excellence and professionalism,” he added.

“I don’t think we could ask for a better venue to support our National Guard,” said Henry as he thanked the families for sharing their loved ones.

Lt. Col. Charles Neely, commander of 1-158 FA, added to that by saying the soldiers would not be able to do their mission without the families’ unwavering support.

“It is only knowing that you’re back home taking care of everything while they’re forward that gives them the peace of mind to do their job,” Neely assured attendees.

Neely said Alpha Battery has been training all year for this mission. They were already geared toward this mission when they did their two weeks of annual training at “Western Strike” on Fort Chaffee, Ark.

“Absolutely. The was the first time a field artillery brigade from the Army National Guard had been put through an exercise of that type. So to come through that with relatively high marks is a first not only for the National Guard but for Oklahoma as well,” Neely said.

The colonel observed that Alpha Battery’s training has been constant since Dec. 16, 2019. He praised the battery commander for putting in long days and nights: “There couldn’t be a better man for the job.”

Neely was captain of Bravo Battery, 1-158 FA, when it deployed to Iraq as a security force in 2005. Asked how he feels watching a new generation of Guard members going out, he said, “You know, I’m really proud of these guys. It’s a different mission now, but they’re only more trained and better equipped than we were in 2005. It’s amazing the technology and the advances that have taken place in the Army since then.”