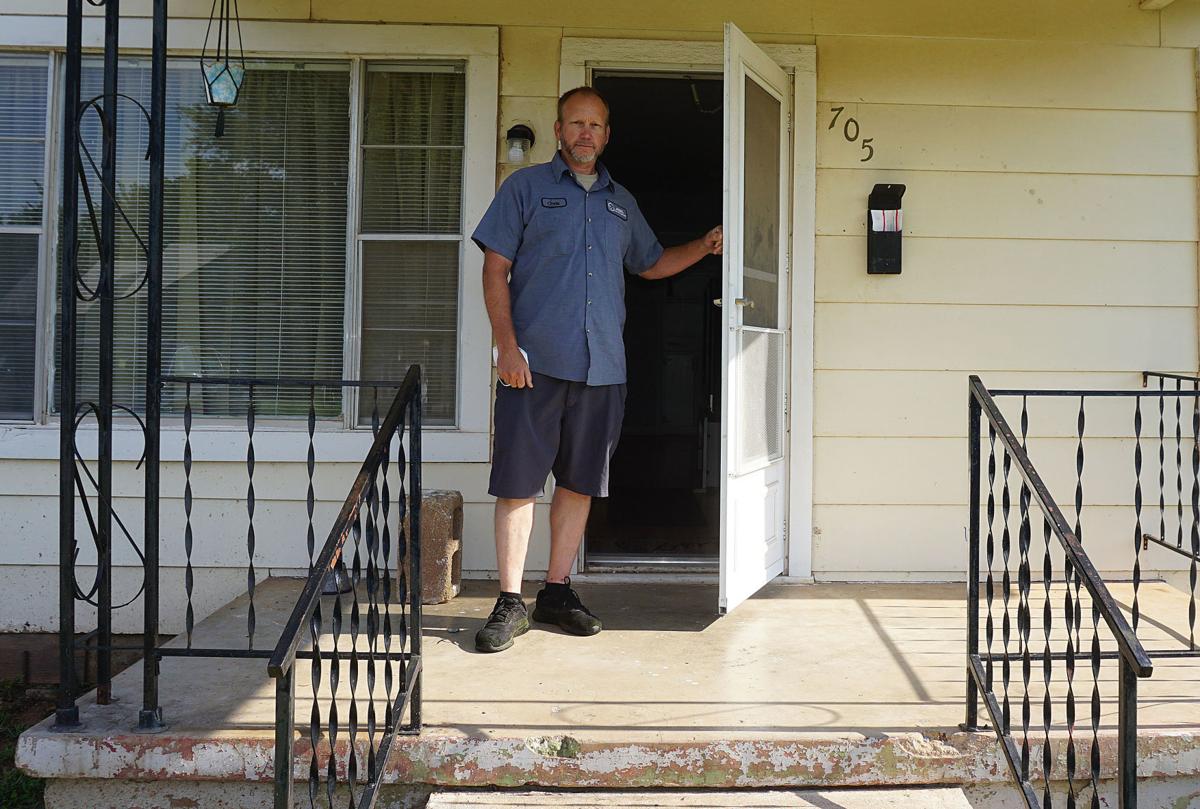 Don Shelby, left, founder of Home At Last Lawton in 2015 and now a resident of the Lawton-Fort Sill Veterans Center, participates with Tammie Shroll, Home At Last president, in giving the keys of a debt-free house to formerly homeless veteran Chris Sprowson on Monday.

Don Shelby, left, founder of Home At Last Lawton in 2015 and now a resident of the Lawton-Fort Sill Veterans Center, participates with Tammie Shroll, Home At Last president, in giving the keys of a debt-free house to formerly homeless veteran Chris Sprowson on Monday.

The dream Don Shelby had when he founded Home At Last Lawton in 2015 was realized Monday when he turned over the keys to a house at 705 SW McKinley to Chris Sprowson.

Shelby, once the personal chef for a Fort Sill commanding general in the 1970s, ended up out on the streets after his work-hours at a local business were suddenly reduced from 40 to 14 hours a week. Eventually, he got a ride to Oklahoma City’s Sooner Stand Down for homeless veterans, where he went into the kitchen to praise the volunteers for the meals they served to the veterans.

He struck up a conversation with Tammie Shroll, food service manager for the Lawton-Fort Sill Veterans Center, and she told him to see her about a job when he returned to Lawton. He did, and by working in the center’s kitchen he was able to get back into a home of his own home.

Because of that, Shelby wanted to help other homeless veterans just as he was helped by the Lawton-Fort Sill Veterans Center. He began the project in another part of town, but after many twists and turns the board of Home At Last Lawton used the proceeds from its many fundraisers to buy the house at 705 SW McKinley outright two years ago.

Volunteers have worked long, hard hours since then to redo the interior of the house. The foundation has been repaired and the wiring, plumbing and wallboard replaced. It also has a new roof, all-new appliances, a new HVAC system and a new fence, according to board member Susan Secor.

Home At Last Lawton also chipped in a couple of hundred dollars so the home would be full of food for the family moving in.

Jervis Jackson, director of the Southwest Oklahoma Continuum of Care, said that when this all began, members of the Homeless Veterans Outreach Committee were engaged in several different efforts over the years to assist veterans in homeless situations. Home At Last Lawton was one of them.

“What you see today is history coming to fruition, and that is to finally give the house over to a veteran and preferably a family,” Jackson said.

“And so it just worked perfectly. The timing was perfect,” Jackson said.

When asked how a retired master sergeant ended up homeless, Sprowson said, “It happens. Fallen on hard times.”

He’s thankful that when he turned to the Lawton Housing Authority they had a job opening. He applied for it, was hired and “that helped in more ways than one.”

Sprowson said he had already taken a look at the house and he was impressed with how new it looked on the inside, and how much hard work everybody put into it.

“I’m very happy I was chosen, and I’m deeply appreciative to all of you,” Sprowson said after receiving the keys from Shelby and Shroll at a ceremony in front of the Lawton-Fort Sill Veterans Center, where Shelby is now a resident.

“He just wanted to give back to the community because the community gave so much to him,” said Katie Copass, an employee of the Lawton Goodyear plant who serves as treasurer for Home At Last Lawton.

She thanked all the people who have helped “because it takes a small army to redo a house from top to bottom. But we got it done, and we all are very grateful and thankful for Don and his dream, and letting us be a part of it today and for the past five years. We’re very excited for the family.”

She said the house is fully paid for, completely redone and outfitted with all-new furnishings.

“The house will be completely gifted, 100 percent debt-free, for them to live in for the rest of their lives,” Copass said.

The board of Home At Last Lawton consists of Tammie Shroll, president; Susan Secor, co-chairman; Katie Copass, treasurer, and Jennifer Bailey and Whitney Salazar, board members.