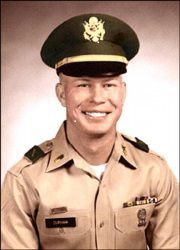 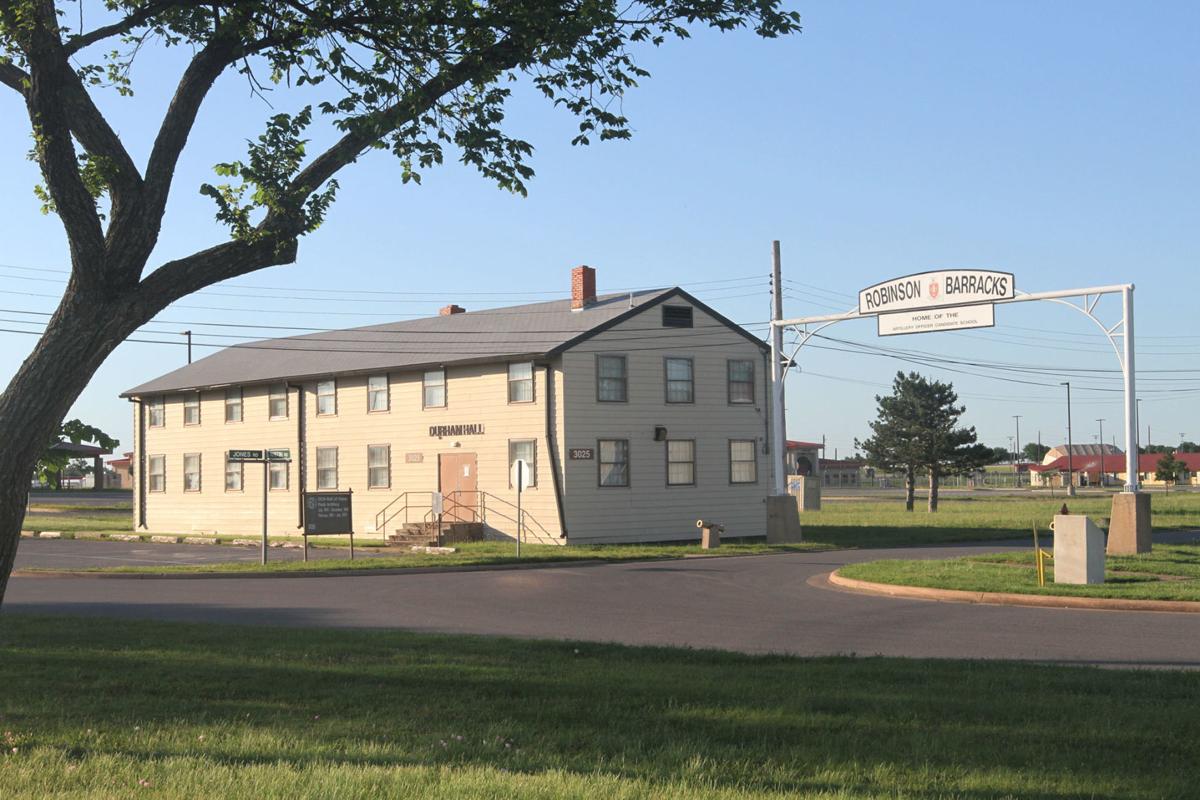 Today Durham Hall, Building 3025 at the southeast corner of Jones and Austin roads on Fort Sill, is home to the Fort Sill Artillery Officer Candidate School (OCS) Hall of Fame, but that will soon change as a result of ambitious plans by the Artillery OCS Alumni. 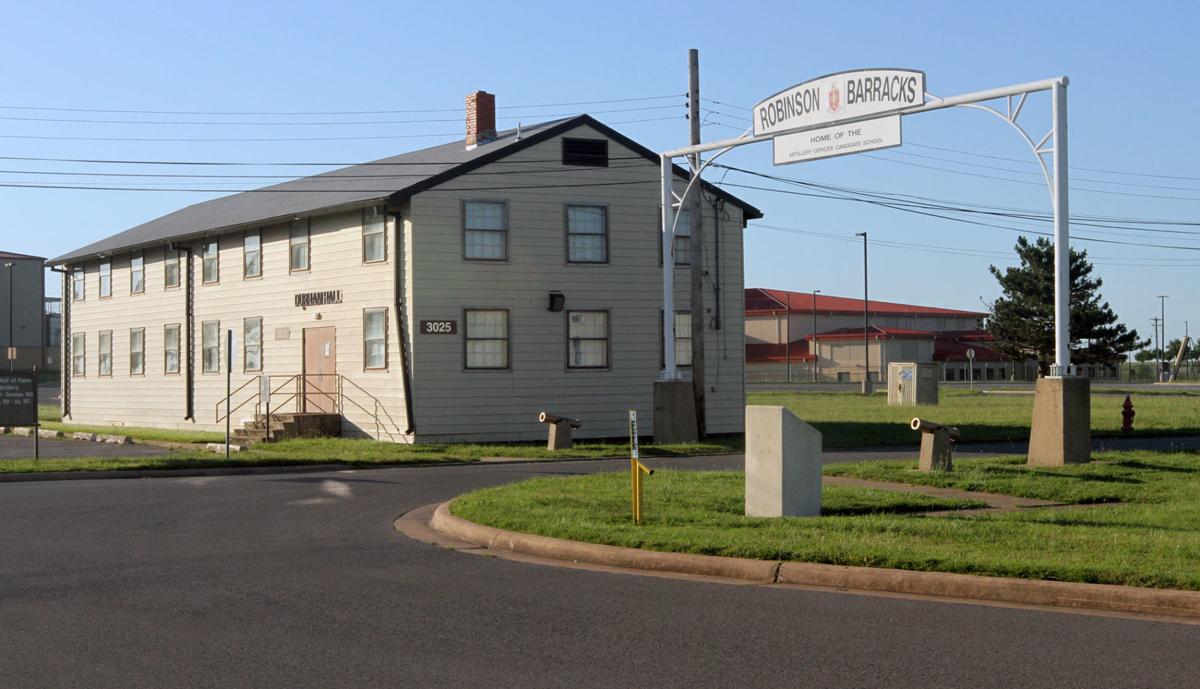 Durham Hall, Building 3025 at the corner of Austin and Jones roads on Fort Sill, has long been home to the Artillery Officer Candidate School Hall of Fame, but that’s about to change. 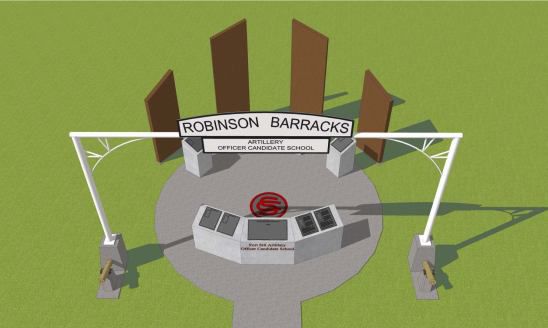 This artist’s rendering gives a rough idea of what the proposed Fort Sill Artillery Officer Candidate School Memorial in Constitution Park would look like. 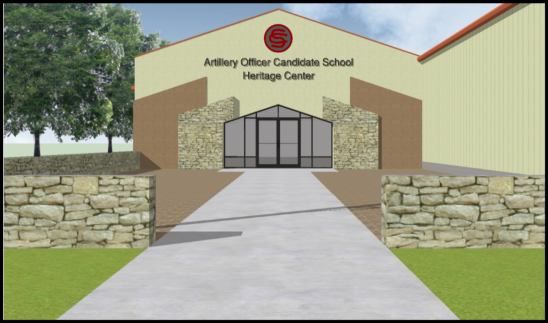 Today Durham Hall, Building 3025 at the southeast corner of Jones and Austin roads on Fort Sill, is home to the Fort Sill Artillery Officer Candidate School (OCS) Hall of Fame, but that will soon change as a result of ambitious plans by the Artillery OCS Alumni.

Durham Hall, Building 3025 at the corner of Austin and Jones roads on Fort Sill, has long been home to the Artillery Officer Candidate School Hall of Fame, but that’s about to change.

This artist’s rendering gives a rough idea of what the proposed Fort Sill Artillery Officer Candidate School Memorial in Constitution Park would look like.

Generous donations from the Artillery Officers Candidate School (OCS) Alumni and their family members will keep their legacy alive by providing valuable additions to the U.S. Army Artillery Museum and Constitution Park, according to Randy and Penny Dunham.

The Dunhams have served as volunteer caretakers for the Artillery OCS Hall of Fame for the past 15 years. It is located in Building 3025 at the southeast corner of Austin and Jones roads. Because of the rising cost of upkeep on the aging structure, the alumni have decided to move their artifacts into new quarters that will gain them more public exposure than ever before.

Durham Hall, the last remaining World War II wooden structure on Fort Sill, is named for 2nd Lt. Harold B. “Pinky” Durham Jr., a graduate with OCS Class 1-67 and a posthumous recipient of the Medal of Honor for his actions in Vietnam.

Durham Hall and the Robinson Barracks archway next to it are the only remnants of what was once a thriving training ground for Army officers.

The Artillery Officer Candidate School was organized in June 1941 in anticipation of the U.S. becoming embroiled in a second world war. After producing 26,060 officers for the war effort it closed its doors in December 1946. To meet the demands of the Korean War it reopened on Feb. 21, 1951, and closed for good on July 7, 1973, after the withdrawal of American ground forces from Vietnam.

The Fort Sill Artillery OCS Hall of Fame was established on June 29, 1968, to honor distinguished graduates and to serve as a source of enduring inspiration and pride to artillery officer candidates of the future. As of May 2019 1,114 individuals had been inducted into the Hall of Fame.

“We’ve identified more than 300 more regular Army colonels and above who meet the criteria to be inducted into the Hall of Fame,” Randy Dunham added.

He cited two projects that are getting ready to happen simultaneously. The alumni have already met the fundraising goals for both, but the Artillery OCS Alumni continues to seek contributions to cover kiosks, dioramas, maps and yearly sustainment costs.

The primary project is the Artillery OCS Heritage Center. This will be a 40-foot by 80-foot addition to the south side of the U.S. Army Artillery Museum located just inside Key Gate West.

The addition will house a theater/classroom/multipurpose area. Wall space will be dedicated to telling the story of OCS through pictures, storyboards and display cases filled with uniforms and other artifacts.

Since all new trainees come through the museum to get better acquainted with the Army story, the addition will provide much-needed classroom space. The trainees will be surrounded by the Artillery OCS history so that they can also learn about Fort Sill’s contributions to the Officers’ Corps for three wars.

There will be instructive kiosks with class rosters, class pictures and a database with stories about the Fort Sill Artillery OCS’s distinguished graduates, fallen comrades and battlefield heroes – a virtual hall of fame.

“The public will have much more access to our story than they do in Durham Hall,” Randy Dunham said.

Penny Dunham added that having the OCS story inside the U.S. Army Artillery Museum guarantees there will be people going through it no matter what.

“Everybody wins on this one. There’s no question about it,” she said.

Contributions in support of the Heritage Center are welcome and appreciated. The Artillery OCS Alumni is an IRS 501©3 charitable organization. Donations are tax-deductible. Please make checks payable to “Artillery OCS Alumni” and mail to P.O. Box 33612, Fort Sill, OK 73503. You can also email admin@artilleryocsalumni.com or call 580-355-5275.

Randy Dunham said the Artillery OCS Alumni began seriously examining their options for the future about three years ago. Back in 2014, the Fort Sill leadership advised them to start thinking along these lines.

Currrently, the organization has a license with the Secretary of the Army to occupy the building, but it carries a responsibility to pay for the utilities and all of the maintenance, plus insurance. The upkeep is quite expensive, and the Artillery OCS Hall of Fame survives on contributions from its alumni.

“So far our graduates have been very generous to us ever since we’ve been here, and have kept us above water,” Randy Dunham said.

Ten years ago the alumni embarked on a long-range goals and strategic plan. They began saving for the future, and then three years ago they weighed the pros and cons of every option on the table, working with Fort Sill leadership and the Directorate of Public Works (DPW) every step of the way.

Moving Durham Hall to the museum complex was ruled out, as was moving it off-post, as was restoring it to the way it was in 1942, as was building an entirely new structure in the museum complex – all for the same basic reason: The building would have to be manned by volunteers, and that did not appear sustainable given the alumni’s aging population.

So they turned to the museum, because they knew the museum needed a classroom and theater.

The Artillery OCS Alumni launched a fundraising campaign in November, starting off with a three-phase approach. It turned out they didn’t need to break the project down into phases at all. Donations poured in so fast that by mid-May they had met the $500,000 goal.

Their annual reunion traditionally occurs the second week of May, but COVID-19 forced them to cancel it this year. Penny said the check that put them over the top actually arrived on the day of what would have been this year’s Hall of Fame induction ceremony.

The civil engineer that the Artillery OCS Alumni hired and Fort Sill DPW are still working on plans for this, and once they’re done, a written request for approval of both projects will be submitted to the Department of the Army.

The memorial will include a replica of the Robinson Barracks archway sized down to 80 percent of the original to meet space limitations in Constitution Park. The miniature cannons on either side of the original arch will move over to become part of the memorial.

The memorial will be on a concrete circle 24 feet in diameter. There will be 12 engraved plaques with biographies and pictures of the four OCS graduates who went on to become four-star generals, the four OCS graduates who earned the Medal of Honor, a brief history of the school itself, a biography of Lt. Gen. Carl H. Jark, who as a captain served as the school’s first commandant, and a list of the 87 Distinguished Service Cross recipients.