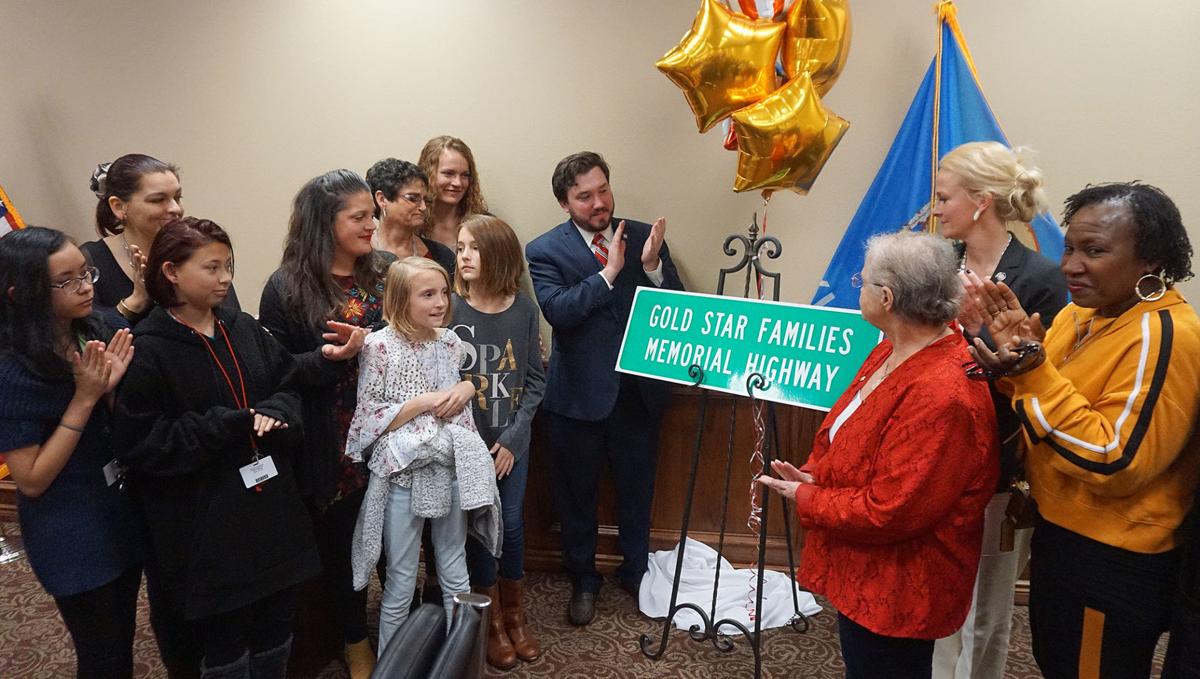 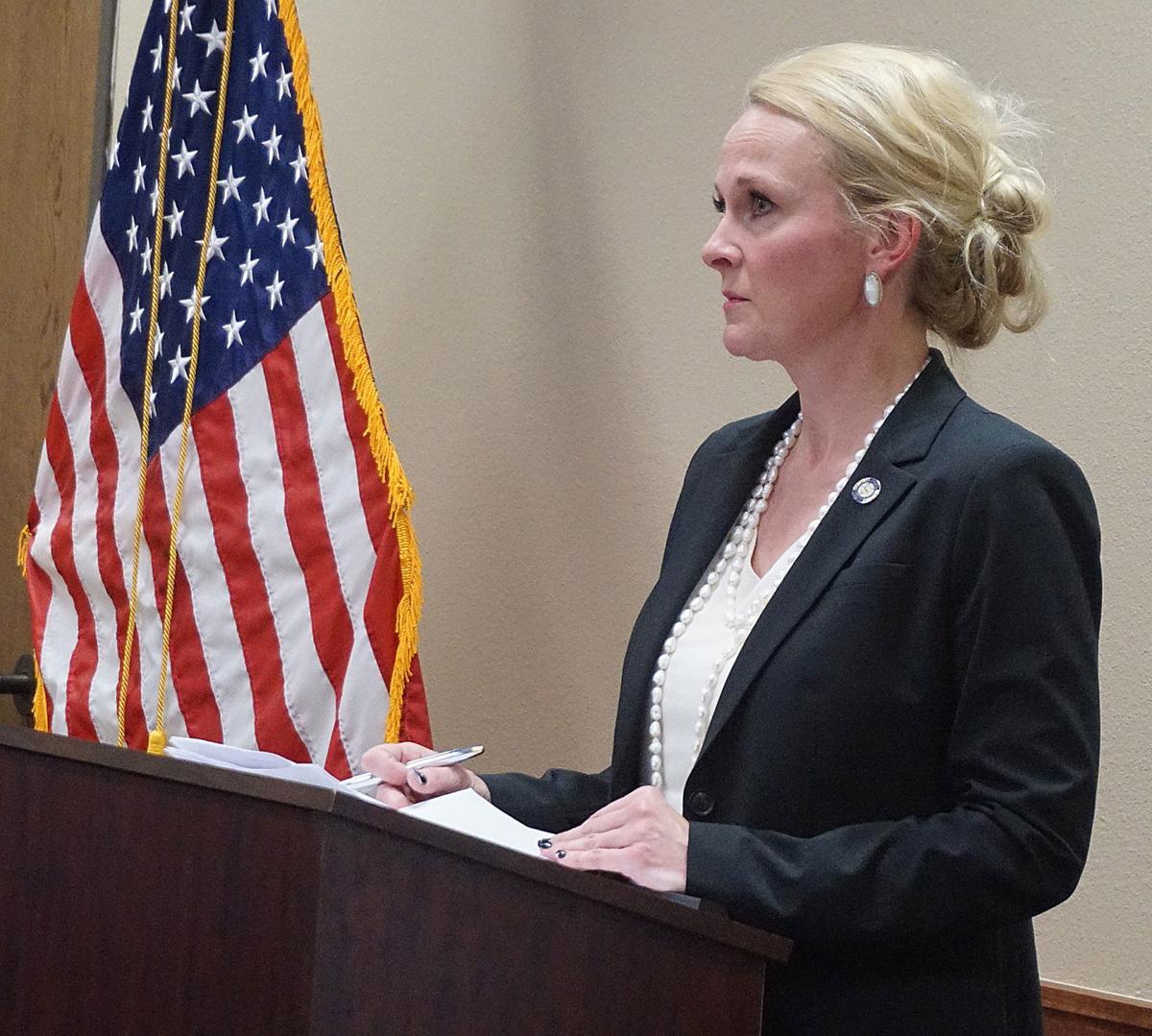 State Rep. Toni Hasenbeck, R-Elgin, House author of a bill to memorialize a stretch of U.S. 277 to Gold Star Families, speaks at the Nov. 15 unveiling of a replica of the sign. 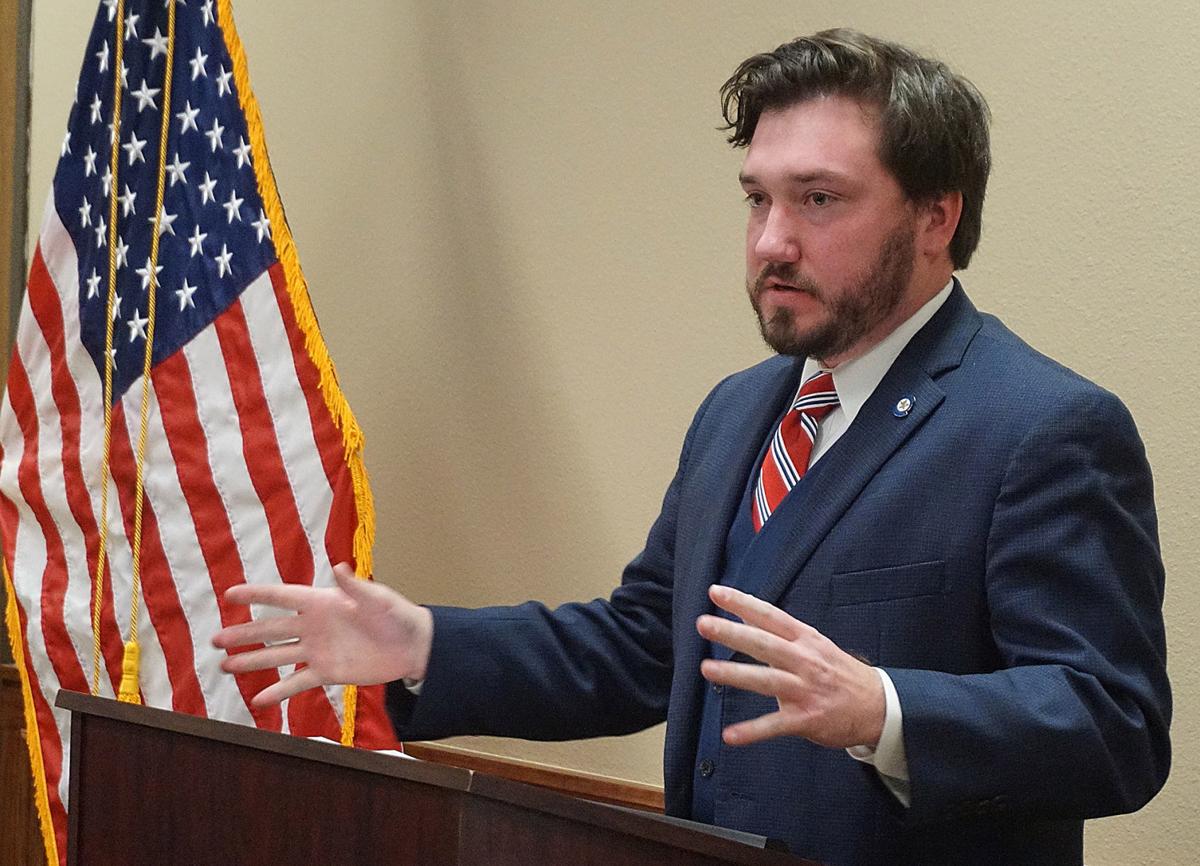 State Sen. John Michael Montgomery, R-Lawton, speaks at the Nov. 15 unveiling of a Gold Star Families Highway sign made possible by a bill he authored.

State Rep. Toni Hasenbeck, R-Elgin, House author of a bill to memorialize a stretch of U.S. 277 to Gold Star Families, speaks at the Nov. 15 unveiling of a replica of the sign.

State Sen. John Michael Montgomery, R-Lawton, speaks at the Nov. 15 unveiling of a Gold Star Families Highway sign made possible by a bill he authored.

The Lawton-Fort Sill community turned out in force Friday for the unveiling of a replica of the Gold Star Families Highway sign that motorists will now see on U.S. 277 between I-44 and Porter Hill.

Gold Star Mother Vicky Flores of Lawton gives Lawton Fort Sill Chamber of Commerce President and CEO Brenda Spencer-Ragland credit for making the suggestion, but she herself was a driving force in getting a four-mile stretch of highway memorialized to all Gold Star Families who have lost a loved one in the service of their nation.

“My son is something that’s always in my mind, like every Gold Star Family, and it’s the one thing I could do to keep his memory, and everybody else’s memory alive. And I’ve been pushing for it for a while,” she said.

The four-mile stretch of highway connects with Jake Dunn Road, which leads to the Fort Sill National Cemetery where her son, Cpl. Wilfred Flores Jr., is buried. Spencer-Ragland, then director of Fort Sill Family and Morale, Welfare and Recreation, contacted Brad and Bill Burgess and others she knew to get the ball rolling and made a phone call to state Sen. John Michael Montgomery, R-Lawton.

“A lot of meetings later, and a lot of time to get what needed to be done, done, and it’s just a process, but it took the time and effort of all the folks to make it happen,” said Flores, a retired sergeant first class. “I thank the Lord, and I thank the community that it’s finally happened.”

She said she wants people who see the sign to know there are soldiers, sailors and military in general who are sacrificing their lives for us.

“Honestly, we wouldn’t be here, we wouldn’t have the freedoms we have, if it wasn’t for our fallen. And that’s what I want that sign to represent,” said Flores, who attended the unveiling with her daughter, Theresa Surface, who said she has named her son after her older brother.

Montgomery confessed he struggles with what to say to a Gold Star Family.

“Somebody has sacrificed so that we have the freedom, we have the liberty to go out and pursue the things that we want to pursue. This country’s been doing that for about 250 years now. We don’t serve an empire of a person or a nationality necessarily. We’re an empire of the mind in the United States. We’ve been very willing to take up arms to that end,” Montgomery said.

Hasenbeck thanked Montgomery for asking her to be the House author and allowing her to be a part of this special occasion.

“It truly is an honor for us to get to bring legislation like this,” she said. “We’re gathered here today to honor the lives of some of our greatest heroes, men and women who gave their lives for our freedom, and to honor the Gold Star Families with the dedication of this stretch of highway.

“The heroes in America come from a full tapestry of American life – from every generation, from bustling cities, windswept prairies, from privilege and from poverty. They were generals and privates and captains and corporals of every race and color,” Hasenbeck said.

“They’re united now, as they were then, by the undying love of our great country ... They knew the fate of the nation depended upon them. They willingly sacrificed their lives so their families and fellow Americans could live in safety, security and freedom,” she said.

During the ceremony Spencer-Ragland shared an anecdote about the town of North Platte, Neb., which earned a reputation for going above and beyond to support its military families. She said she believes Lawton-Fort Sill is the new North Platte, Neb.

“I believe it with everything in me, and I think this room articulates the importance and the love of this great nation for our military. I think the work that Sen. Montgomery and Rep. Hasenbeck have done, and what Gov. (Kevin) Stitt did when he signed this proclamation, just represents that we are the new North Platte,” she said.