You have permission to edit this article.
Edit
Home
COVID-19 Updates
News
Almanac
Sports
Opinion
The Beat
Obituaries
Classifieds
E-Editions
Share This
1 of 6 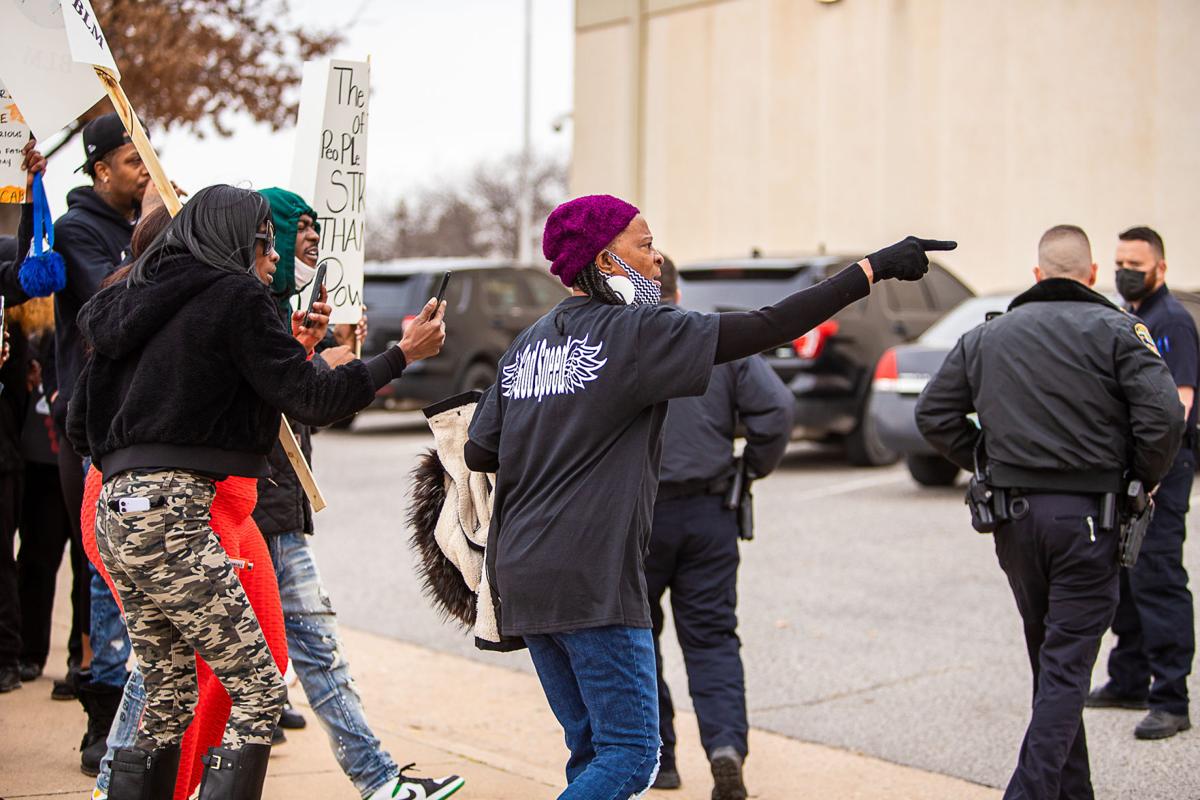 Jan Johnson makes her point clear outside the Lawton Police Department Friday as she and other protesters look for answers into the Jan. 17 shooting death of Zonterious Johnson from police gunfire. 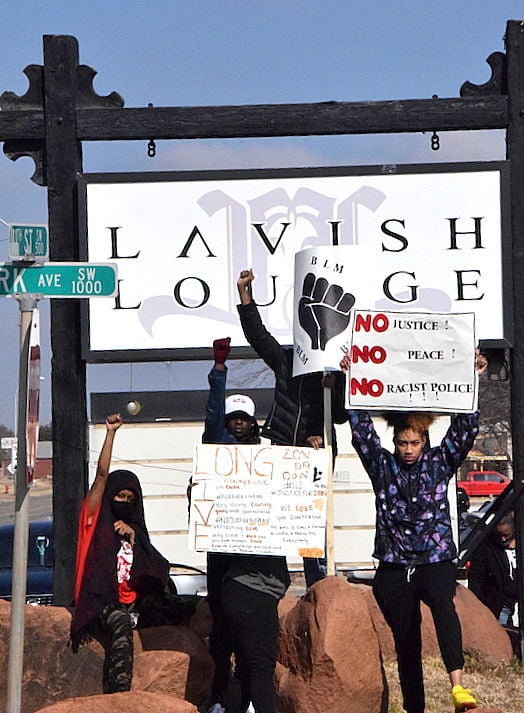 Protesters raise fists and signs outside the Lavish Lounge, 1015 SW Park, Friday morning as they protest the Jan. 17 shooting death of Zonterious Johnson, 24, by police. 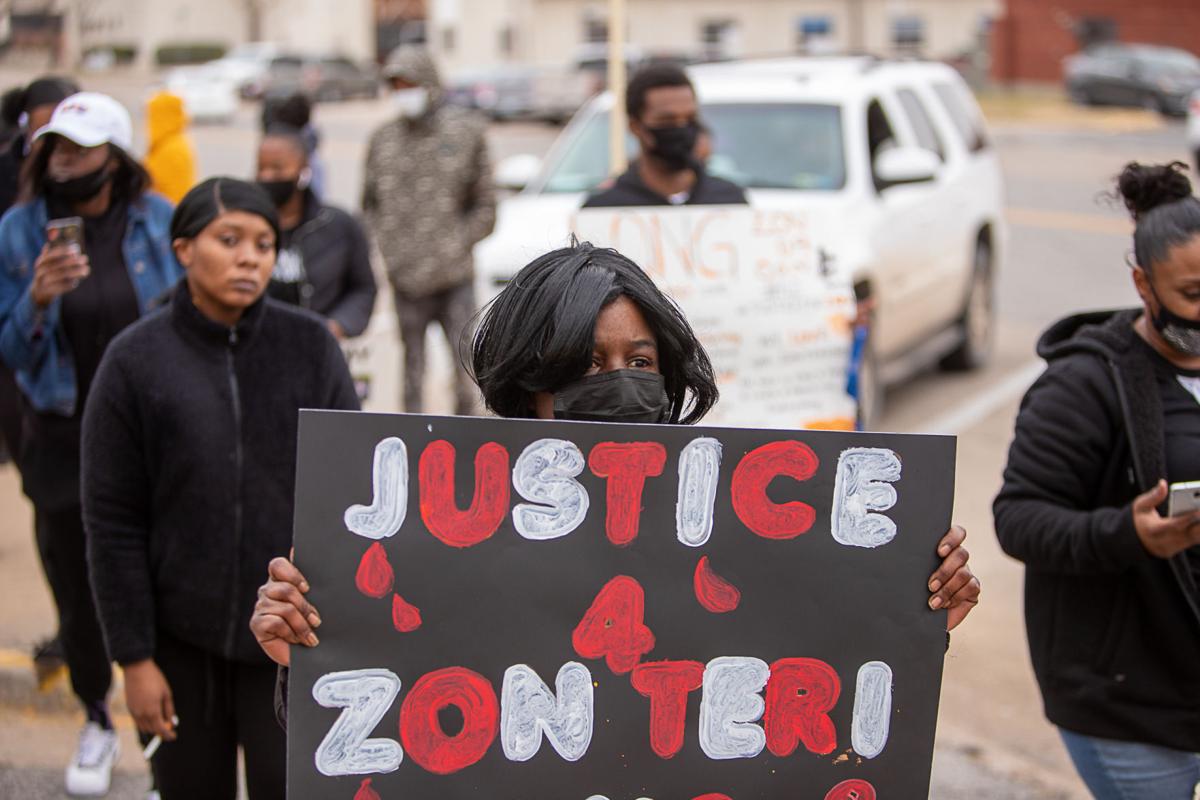 One of almost three dozen protesters outside Lawton Police Department on Friday shares her message for the morning's event. 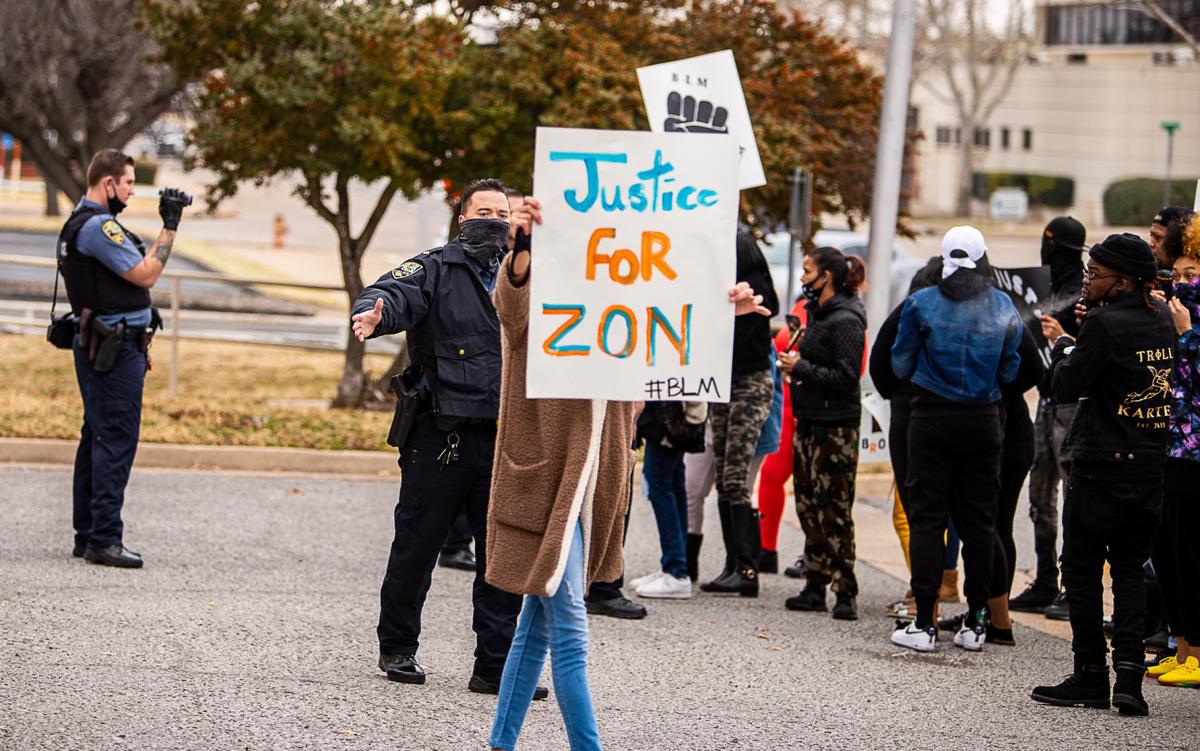 A Lawton police officer directs a sign-carrying protester back to public space during Friday morning's protest outside the police department. 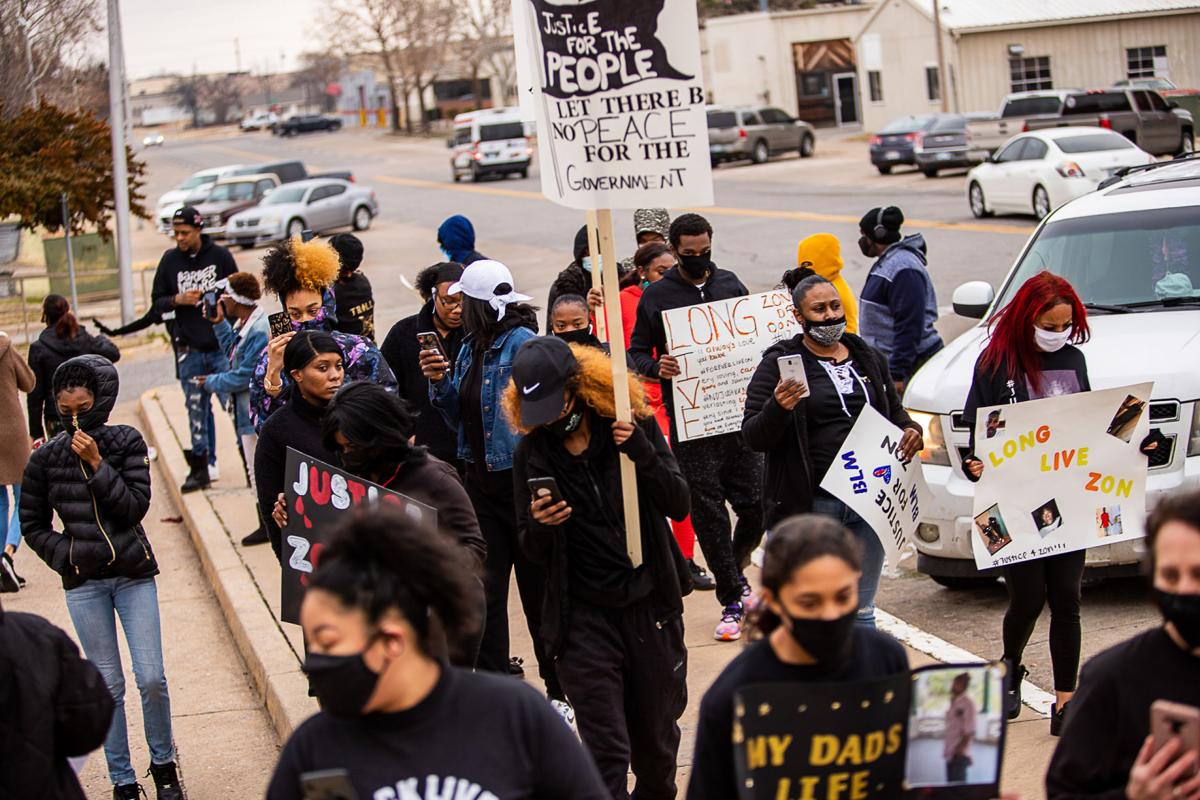 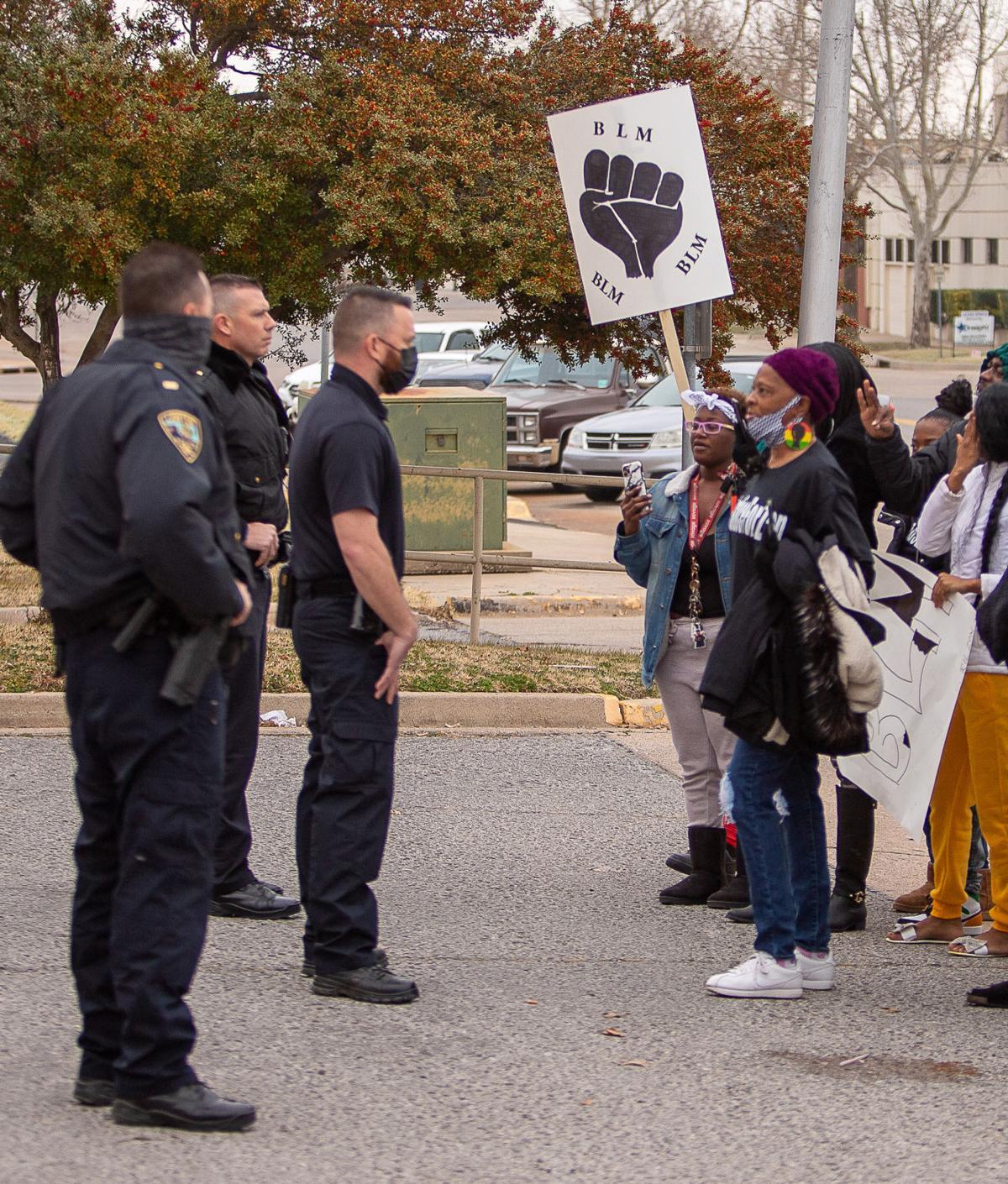 Jan Johnson makes her point clear outside the Lawton Police Department Friday as she and other protesters look for answers into the Jan. 17 shooting death of Zonterious Johnson from police gunfire.

Protesters raise fists and signs outside the Lavish Lounge, 1015 SW Park, Friday morning as they protest the Jan. 17 shooting death of Zonterious Johnson, 24, by police.

One of almost three dozen protesters outside Lawton Police Department on Friday shares her message for the morning's event.

A Lawton police officer directs a sign-carrying protester back to public space during Friday morning's protest outside the police department.

The shooting prompted a contingent of the victim’s family and friends to hold a protest outside the police station Friday morning.

Zonterious Johnson drew his weapon and faced a police officer and, after being told to drop the weapon, declined, according to a statement Friday from Lawton Police Chief James T. Smith. That’s when the initial gunshot was fired by police. Investigators have not said how many times Johnson was shot.

Investigators have confirmed to The Constitution that three 9mm shell casings were found outside the lounge where Johnson was shot. A 9mm handgun was recovered with Johnson.

The fatal shooting is under investigation by the Oklahoma State Bureau of Investigation (OSBI), which is tasked with the investigation since it is a police-related incident.

Smith said that initial review of the incident “suggests applicable policies and procedures were followed.” However, the OSBI, an independent and third-party agency, will offer its final analysis to the District Attorney’s office upon completion of its investigation.

“The incident that resulted in the loss of life of Zonterious Johnson on Jan. 17 is one that our community is processing and grieving together,” Smith said in a statement Friday. “Under any circumstances, the loss of life is tragic for all involved.”

The police chief offered condolences for those affected by the shooting. He said the City of Lawton and Lawton Police Department “are fully committed to understanding all the facts and circumstances leading up to this incident.”

“Per policy, I cannot offer details in regard to ongoing investigations, but I do ask the community and affected loved ones for patience and understanding as this process takes place,” Smith said. “Misinformation can further divide us.”

Johnson’s death is the city’s first reported homicide of 2021.

The venue owner, Seth Fleming, has told The Constitution that he was at the venue and Johnson was celebrating his 24th birthday when gunfire erupted. He said the club was closed to the public when events unfolded. He asserted that the gunfire came from police inside the lounge. He also said that a second round of a rubber bullet was fired inside by an officer.

Smith said the shots were not fired by Lawton police officers, inside or outside the building, and that no rubber bullets were discharged.

“I would like the citizens of this community to know that the City of Lawton and the Lawton Police Department are fully committed to understanding all of the facts and circumstances leading up to this incident,” he said in the statement.

On Friday morning, around three dozen protesters gathered outside the Lawton Police Department to protest the shooting. The group moved to the Comanche County Courthouse where they began honking their car horns en masse before moving back to the Lavish Lounge to rally with signs and fists raised along the busy roadway.

Jan Johnson, grandmother of the victim, told The Constitution on Friday that her group of allies was seeking answers without violence. She said it’s about being heard by law enforcement and city leaders.

“I’m here today because I want somebody to feel my pain,” she said. “I heard the shots that morning and I never would’ve thought it was my grandson until his friends came knocking on my door to tell me the police just killed my grandson.”

In Smith’s statement, he said the day of the shooting, he requested the LPD chaplain visit Johnson’s family on his behalf.

Johnson said no representative has come to her to explain what happened. It’s another reason she and others were outside the police station on Friday morning, she said.

“If they would have come to me, I wouldn’t have had to come to them,” she said. “I begged the police to talk to me and tell me what happened.”

Claiming that if she’d shot an officer, she would be charged with murder, Johnson said she wants to see equal justice.

“Today isn’t about violence, it’s about answers,” she said. “If they would’ve came to me, I would’ve never come down here. I’ve never been here before and I never disrespected no police in this community.”

The grandmother said she knows her grandson wasn’t perfect, he had run-ins with the law and had gone to prison. But she said she doesn’t believe he deserved to die the morning of his birthday.

Zonterious Johnson did have an extensive history with the Comanche County court system. In November 2017, he received a seven-year suspended sentence after being convicted of a felony count of second-degree burglary. He also pleaded guilty in August 2020 to a felony case of breaking and entering with unlawful intent, for which he received a one-year suspended sentence. He also had two open misdemeanor cases of domestic abuse allegations from August 2019 and from November 2020, records indicate.

Johnson said her grandson had gone through “hell and high water” to return to his family. She said she was with him always.

“He just did a year in jail and ain’t been home three months and they already killed him,” she said. “I’m just here as a hurt grandmother because I love my grandson. I cut his umbilical cord and he made me a grandmother at 36 years old. He left us at 24 and now I’m 60.”

In Smith’s statement, he asked the community to lift Johnson’s family in prayer. He said he is relying on the partnership with the City of Lawton Citizens Advisory Board to help maintain open lines of communication with the community to help strengthen ties between officers and citizens.