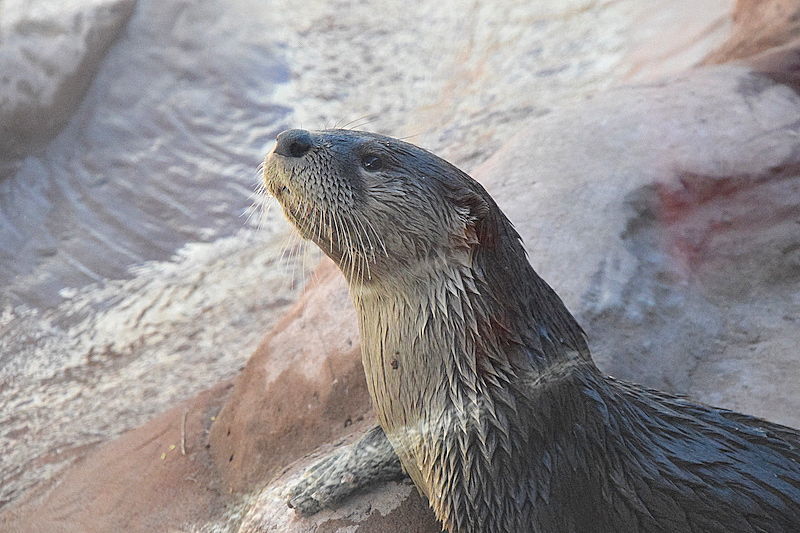 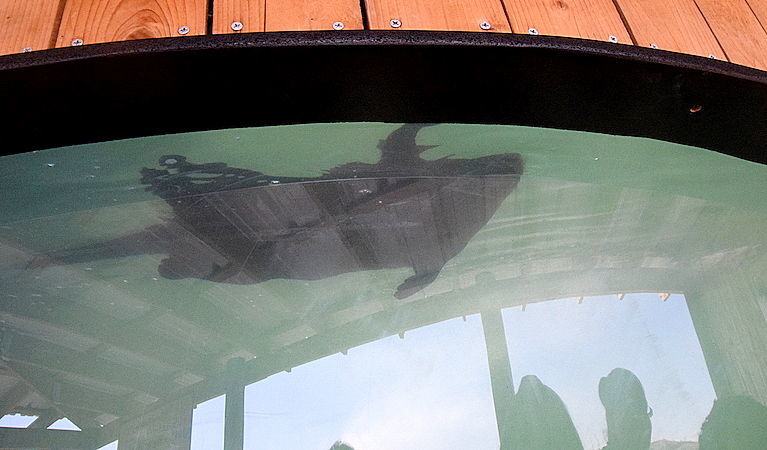 The view from the swim tank offers a profile of an otter living his best life in his new habitat at the Medicine Park Aquarium. 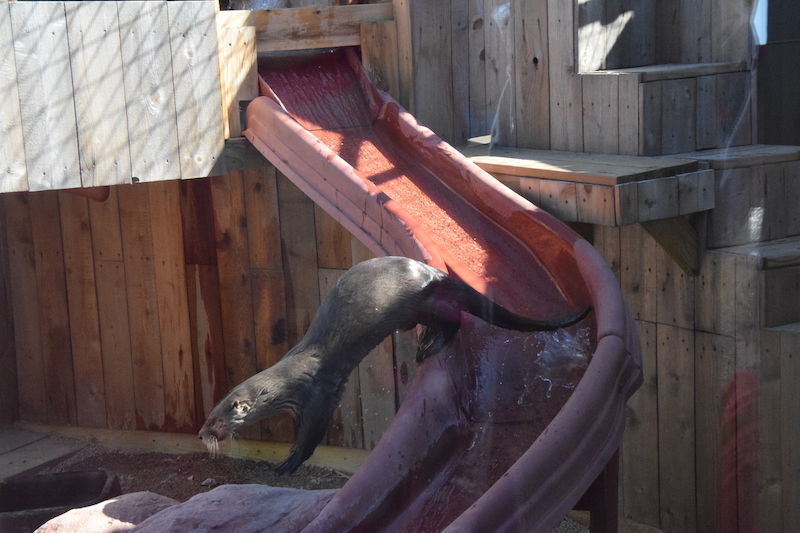 Dean the otter takes a leap from his enclosure's slippy slide, as an otter will do when in the mood. 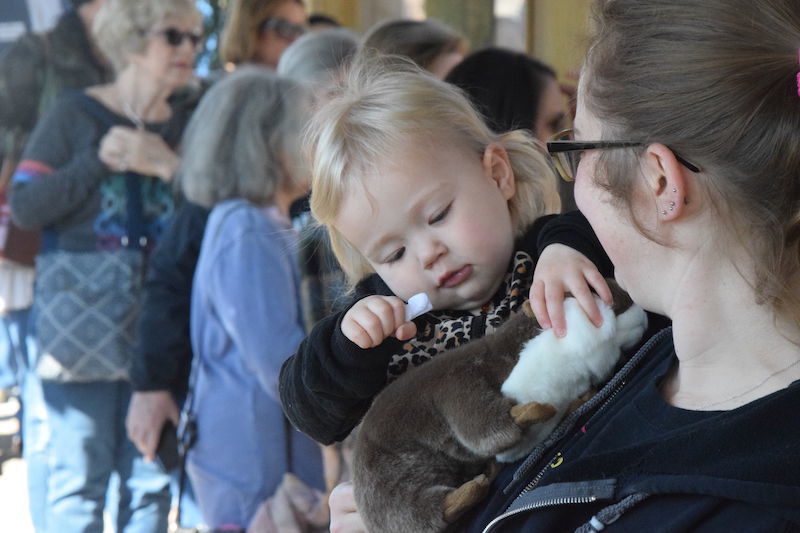 Held by her mother Salina Trisdale, 1½ year old Christina stays focused on her stuffed otter as a large audience watches the moves of Dean who is housed in the Medicine Park Aquarium and Natural Sciences Center's otter habitat. 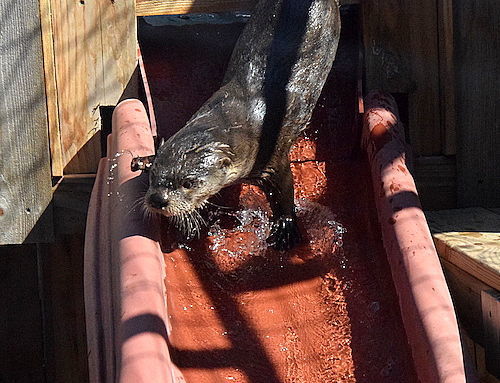 Dean the otter readies to take a ride down his slippy slide.

The view from the swim tank offers a profile of an otter living his best life in his new habitat at the Medicine Park Aquarium.

Dean the otter takes a leap from his enclosure's slippy slide, as an otter will do when in the mood.

Held by her mother Salina Trisdale, 1½ year old Christina stays focused on her stuffed otter as a large audience watches the moves of Dean who is housed in the Medicine Park Aquarium and Natural Sciences Center's otter habitat.

Dean the otter readies to take a ride down his slippy slide.

With well over 100 people there for the debut of Dean the otter, you couldn’t really weasel out of having a good time.

The habitat, sponsored by the McCasland Foundation of Duncan, is home to two North American River otters, Sam and Dean. Named after a pair of characters on the TV show “Supernatural,” it was fitting that the appearance of only Dean offered a stir of mystery. It turns out, he was ready to face an audience and enjoy his surroundings with an adoring audience at hand. Sam’s still a bit shy.

It’s quite a place to call home, according to Nicole Rowe, Aquarium and Life Sciences Director.

“Sam and Dean have settled into their new habitat nicely,” she said. “They love the water slide and cattail plantings, which they tend to smash flat while exploring through the dry winter stalks.”

Executive Director Doug Kemper said the habitat is another big step in the implementation of the Center’s Master Plan. The goal is to make the campus a native wildlife zoo, aquarium and botanical garden. The latest habitat is the latest following earlier outdoor habitats for wild quail, a coyote and a bobcat.

Kemper offered gratitude to the McCasland Foundation for supporting the effort.

“This is an important part of our native wildlife story,” Kemper said. “We’re really excited.”

“Historically, river otters thrived throughout Oklahoma, but their numbers were dwindling until the 1980s when the Oklahoma Department of Wildlife Conservation launched a re-introduction program,” he said. “Today, river otters are again abundant in our state.”

Though they may be in abundance, it’s not often you can see the river otter up close, let alone in its natural habitat. Kemper said Sam and Dean come from an Ohio breeder. It’s preferred for a habitat like the aquarium to get animals that are used to living in domesticity; it’s a lot trickier to bring in animals that were first wild.

“It’s better to get captive-raised animals,” he said. “If they come from the wild, they’re not good acclimating well to life in an enclosure.”

But what an enclosure.

The new habitat offers some luxuries, such as slides and built up layers to create a mini-fort area similar to an elaborate tree house that comes equipped with a pool. There are also little entrance/exit doors in the fence line to allow Sam and Dean to head to their private home when they “otter.”

“This exhibit is designed with a large viewing area and full underwater view of their swimming pool which will allow visitors to see how truly beautiful and playful they are,” he said.

Visitors will get to see the semiaquatic duo living the high life. Kemper said the habitat’s windows keep people from trying to stick their fingers through bars to touch the merry musky mammals. They are little carnivores, after all.

That may be, but it’s a hard to see the beastly part of the pair when they’re “otterly adorable.”

Dean’s big dark eyes darted and with twitches of his whiskers as he would get to the top of his slide and look down it before making his way along its watery path on his belly caused those in attendance to laugh and comment on the cuddliness of the little guy. Few knew the river otter’s familial connection links up with the honey badger, minks, polecats, wolverines and other like animals.

Frederick mosaic artist Jenny Perry was with a group of friends who made the trip to enjoy the opening. If you thought it wasn’t as great as anticipated, you “otter know better.”

Ever the “showotter,” Dean would leave the viewing area only to return to sighs and cries with each fresh sighting. Sometimes, he’d disappear into his swimming pool, only to soon appear as a silhouette atop the water level. When he dove deep inside the murky pool, he became a shadow who would startle and excite with his appearance near the viewing window as he’d rise to the top.

With sun rays beating down, Dean would warm up in a small pool, then trot over patches of land as he’d beat webbed feet back to the fun zone. He wasn’t the only young mammal having similar fun.

With her 1½-year-old daughter Christina in her arms, Salina Trisdale of Lawton, said her daughter was more infatuated with the small stuffed otter in her arms. As members of the audience called attention to another of Dean’s otter antics, the mother knew where the day would end with her kiddo’s antics.

“I think after she’s played in the dirt enough, she’ll be tired,” she said.

It’s “otterly” believable she could say the same about Dean by evening.