Free access for current print subscribers
Get Started
You are the owner of this article.
Edit Article Add New Article
You have permission to edit this article.
Edit
Home
COVID-19 Updates
News
Almanac
Sports
Opinion
The Beat
Obituaries
Classifieds
E-Editions
Share This
1 of 3 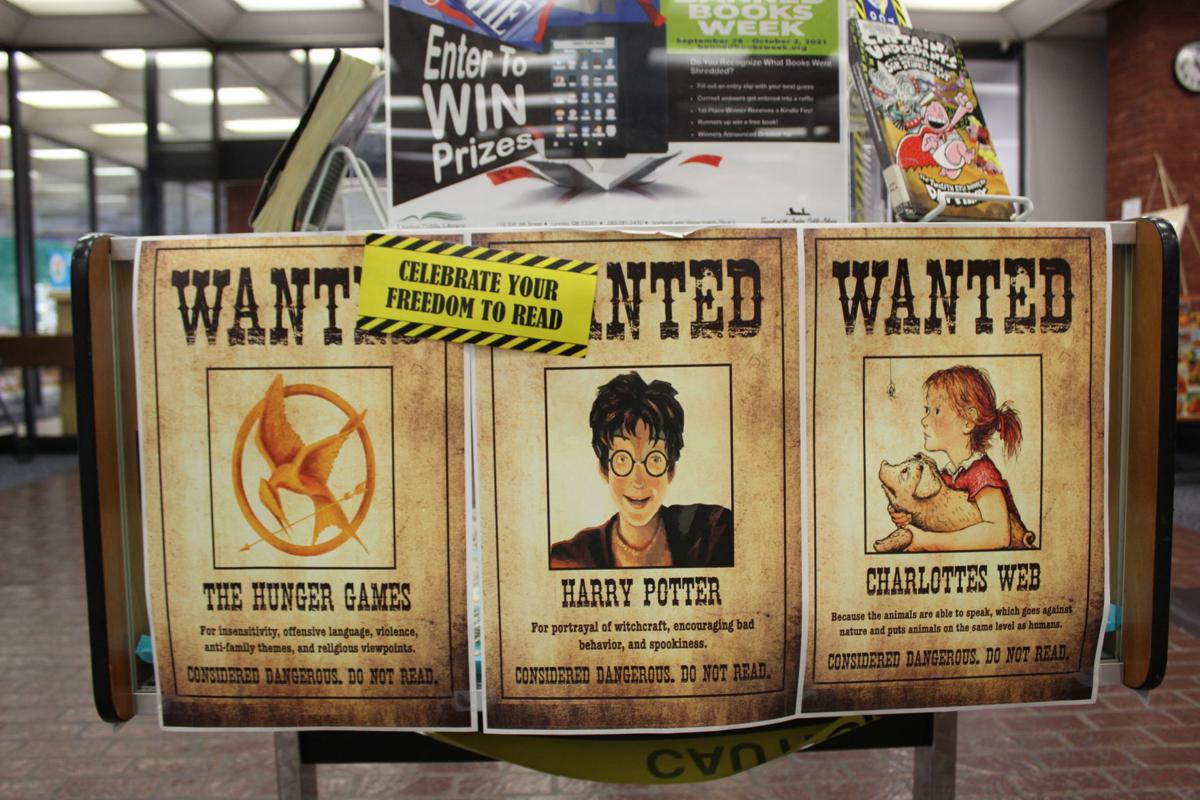 The Lawton Public Library has a banned books display setup for patrons looking to learn more about banned books. 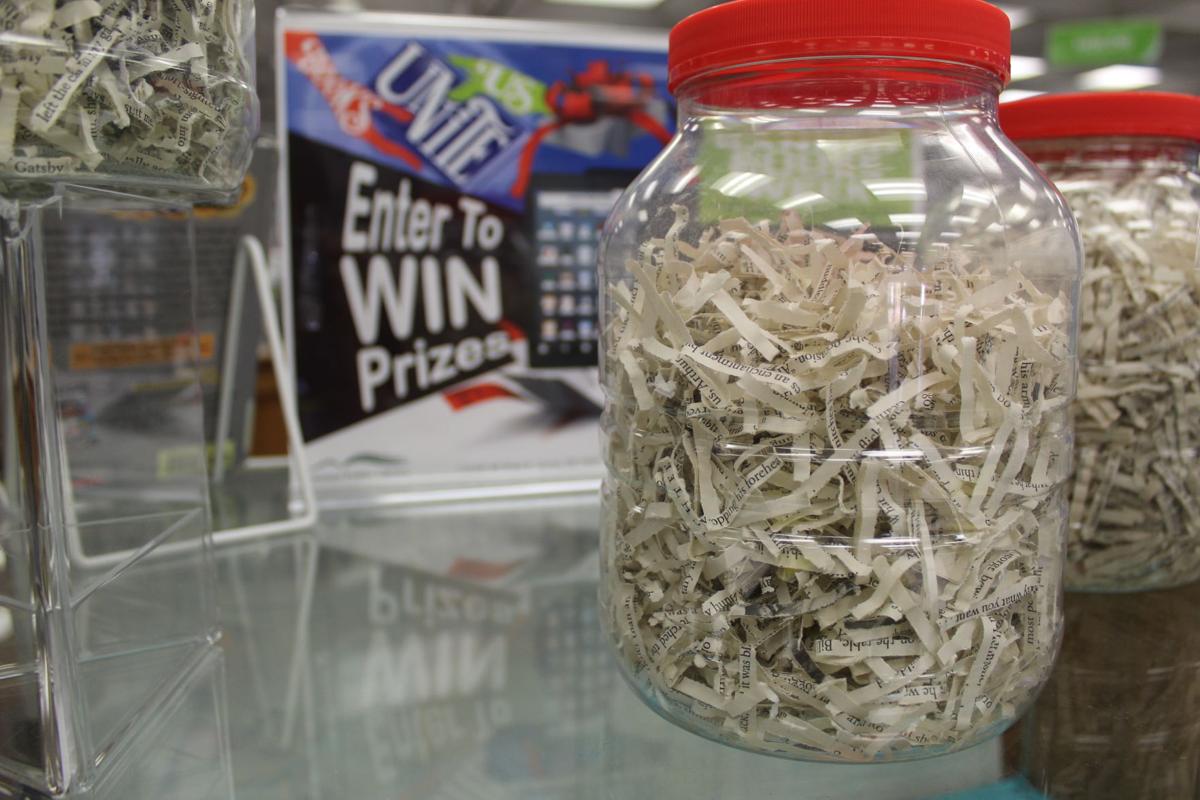 Jars full of shredded books await sharp patrons able to guess what book the jar contains. The first place winner in the contest will receive a Kindle Fire. 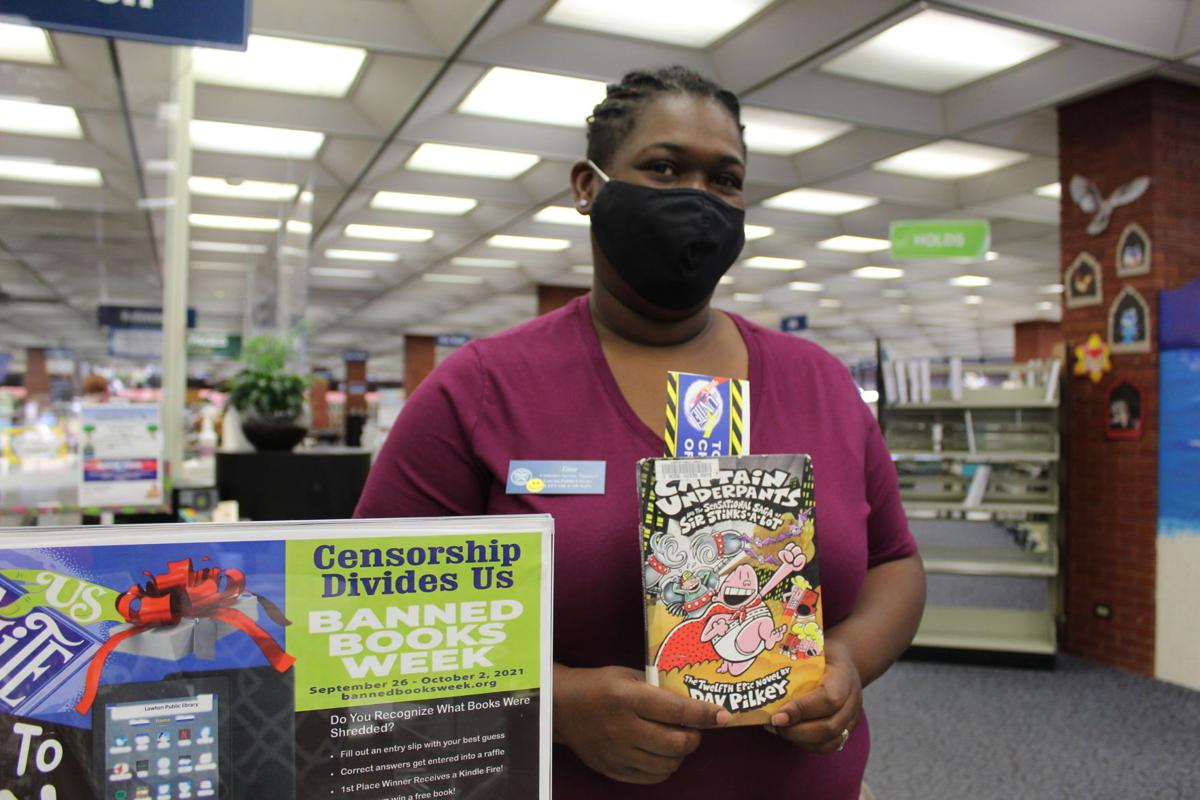 Tina King, Customer Service Manager for the Lawton Public library, shows off one of the books on display during "Banned Book Week."

The Lawton Public Library has a banned books display setup for patrons looking to learn more about banned books.

Jars full of shredded books await sharp patrons able to guess what book the jar contains. The first place winner in the contest will receive a Kindle Fire.

Tina King, Customer Service Manager for the Lawton Public library, shows off one of the books on display during "Banned Book Week."

To the outside observer, it might seem odd for a library to celebrate something called “Banned Book Week.”

“I have always found it a bit clunky to call it ‘Banned Book Week’ as we really aren’t celebrating banned books,” Herr said. “We are celebrating the freedom to read without books being banned or restricted.”

“Banned Book Week” has been observed annually across the U.S. since it was initially launched in 1982 in response to a surge in the number of challenged books in schools, libraries and bookstores.

This year’s theme for the week is “Books Unite Us, Censorship Divides Us.”

“This year’s theme is spot on,” Herr said.

Every year, books are challenged or banned by private groups and public authorities around the country. The challenged content is labeled “controversial” or “objectionable” and these entities attempt to remove the books from public access, Herr explained.

The freedom to read is essential to American democracy, according to the American Library Association’s “Freedom to Read” statement, which the Lawton Public Library’s board has endorsed.

“We, as individuals devoted to reading and as librarians and publishers responsible for disseminating ideas, wish to assert the public interest in the preservation of the freedom to read,” the statement claims.

The Lawton library has not received any challenges to books over the last year, according to Herr, who said that the types of challenges do shift overtime.

“I will tell you that the Dr. Seuss books earlier this year led to quite a conversation around the nation and even here at Lawton Public Library. Our library board discussed the books at two board meetings. We did not remove the books from our collection,” Herr said.

Seuss books have a history of challenges, with “The Lorax” being among one of the most frequently challenged according to the American Library Association, which publishes a yearly report on the most banned and challenged books.

In 2020, the association’s Office for Intellectual Freedom tracked 156 challenges. The top ten most challenged books for 2020 included: “George” by Alex Gino, “Stamped: Racism, Anti Racism, and You” by Ibram X. Kendi and Jason Reynolds, “All American Boys” by Jason Reynolds and Brendan Kiely, “Speak” by Laurie Halse Anderson, “The Absolutely True Diary of a Part-Time Indian” by Sherman Alexie, “Something Happened in our Town: A Child’s Story about Racial Injustice” by Marianne Celano, Marietta Collins, and Ann Hazzard, illustrated by Jennifer Zivoin, “To Kill a Mockingbird” by Harper Lee, “Of Mice and Men” by John Steinbeck, “The Bluest Eye” by Toni Morrison and “The Hate U Give” by Angie Thomas.

A few of the cited reasons behind the challenges to books in the list include conflicting with a religious viewpoint; contains “selective storytelling incidents”; thought to promote anti police views; claimed to be biased against male students; sexual references; divisive language; racial slurs; racist stereotypes; sexually explicit; and profanity.

For their part in the celebration, the library is giving away a Kindle Fire to the first place winner of a shredded book contest. Entrants need to correctly guess the book that has been shredded and placed in a clear jar.

“Words have power and access to diverse ideas makes all of us more powerful,” Herr said.