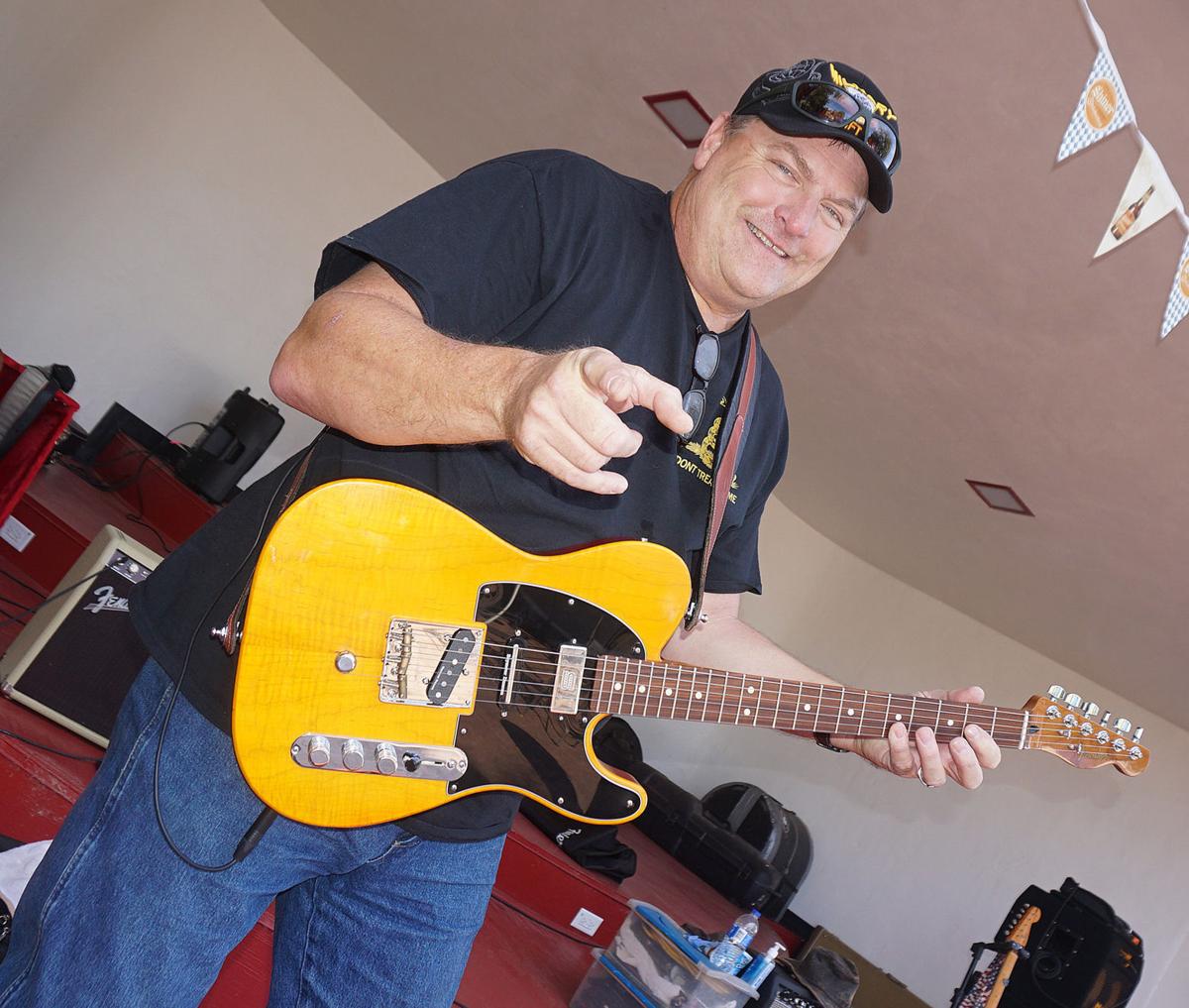 Gary Tignor, lead guitarist for the band 9 Mile Hill, gets ready to perform inside the Fort Sill Patriot Club band shell for the 24th annual Oktoberfest on Friday.

Gary Tignor, lead guitarist for the band 9 Mile Hill, gets ready to perform inside the Fort Sill Patriot Club band shell for the 24th annual Oktoberfest on Friday.

If you visit the official web site for the world’s largest Oktoberfest in Munich, Germany, you will find a cartoon of a weeping man holding his Alpine hat in his hands. That is because this year, much to the disappointment of diehard polka enthusiasts, their Oktoberfest was canceled because of concerns about the coronavirus pandemic.

But Oktoberfest is alive and kicking in Lawton Fort Sill.

Fort Sill Family and Morale, Welfare and Recreation went forward Friday with what has been a 24-year tradition of celebrating Bavarian food, drink, music, games and – back this year after a long absence – a volksmarch.

Shane Dunleavy, business and recreation chief for MWR, said the route was just under three miles, or about five kilometers. Walkers departed from the Patriot Club at 4:30 p.m. headed for White Wolf Manor and a complete circuit of the Fort Sill Golf Course. Dunleavy expected to see them back at 5:30 p.m., when the doors would open for the big event.

Water points along the way not only kept the marchers hydrated but also offered small trinkets. Back at the Patriot Club, they could purchase boxed meals with enough food for two people and commemorative steins. Patrons who wanted to keep their distance had the option of phoning in pre-orders this week as part of a “Boxtoberfest” initiative, which allowed them to get their schnitzel or bratwurst and brotchen dinners to go.

The 77th Army Band played polkas and other German music inside the Patriot Club ballroom while 9 Mile Hill, a classic rock, country and blues band from the Altus area, set up shop in the World War II-era band shell adjoining the outdoor beer garden.

Bavarian party games like the Stein Hold, Paper Dragon and Unfold were part of the festivities. For Unfold, contestants have to see how fast they can unfold a frozen T-shirt and put it on. There were drawings for Yeti coolers, steins and the like.

Since face masks are required in all buildings on Fort Sill where patrons cannot safely distance from each other, MWR provided free masks for anyone who didn’t have one. And since German beer and Jaegermeister were flowing freely, MWR also provided free cab rides home.

So why does Fort Sill have an Oktoberfest?

“We’ve got a pretty good relationship with Germany itself, with all the troops that are stationed over there or in Europe in general, and so we’re just trying to bring some semblance of that tradition over here to commemorate the time of the year,” Dunleavy said.

The bass player for 9 Mile Hill, Paul Soliz of Tipton is an electrician for Fort Sill’s Directorate of Public Works. He works for Vet Pride, a subcontractor for PCSI. The rest of the band includes two members who retired from jobs at Altus Air Force Base, lead guitarists Gary Tignor and Gary Curry, both of Blair, and one who works at Jackson County Memorial Hospital in Altus as an Air Evac Lifeteam 6 emergency medical technician, drummer Carlos Mendoza of Headrick.

“We’re just a bunch of country boys coming out to have a good time tonight,” Soliz said. “MWR’s been really nice, and we feel privileged to be able to entertain everybody tonight.”

Soliz said the band actually got together about three years ago when an opportunity arose for Mendoza and himself to play an event. They asked the lead guitarists and vocalists if they wanted to do a one-day show, because they were semi-retired from the music business.

“They agreed, and that one day turned into present time. We’ve been together ever since. It worked out really well. We get along just fine, and we have a good time doing it,” Soliz said.