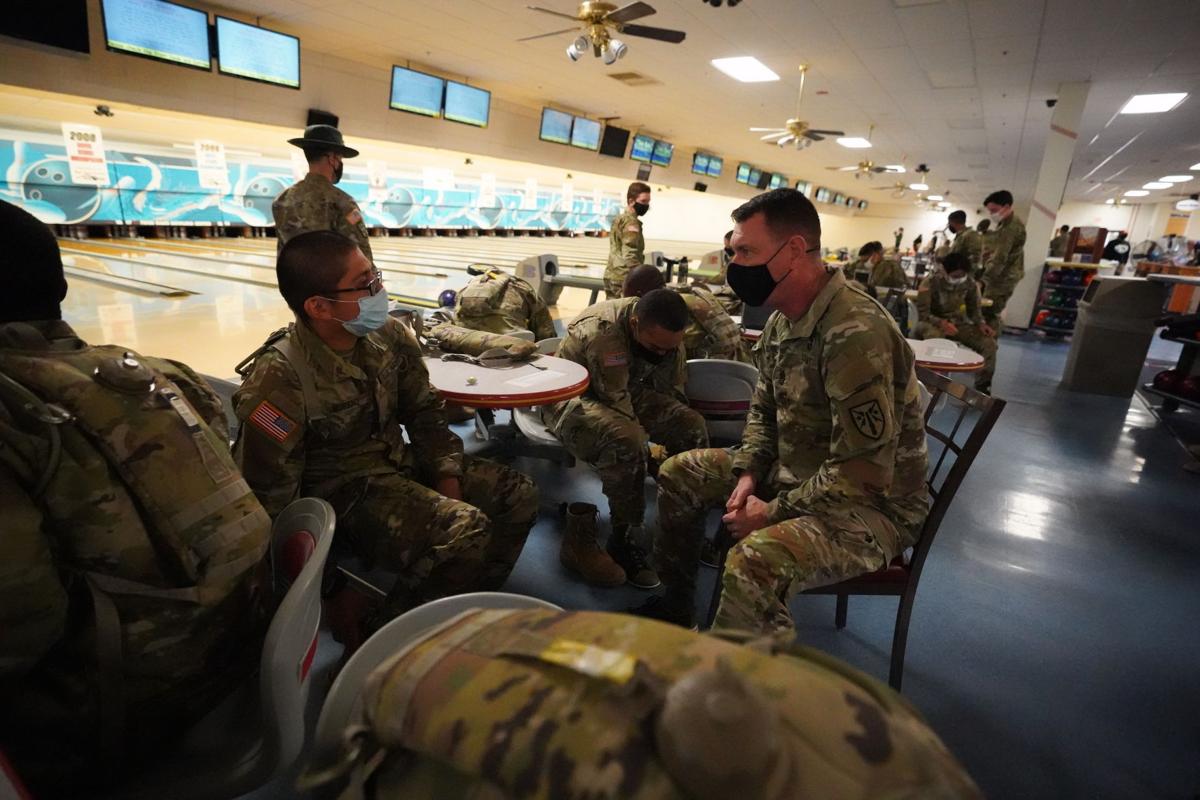 Fort Sill Command Sgt. Maj. Stephen Burnley, right, visits with a basic training soldier at the post bowling alley. Burnley said he makes a point to visit and talk with as many soldiers as possible and help them with any issues they may have. 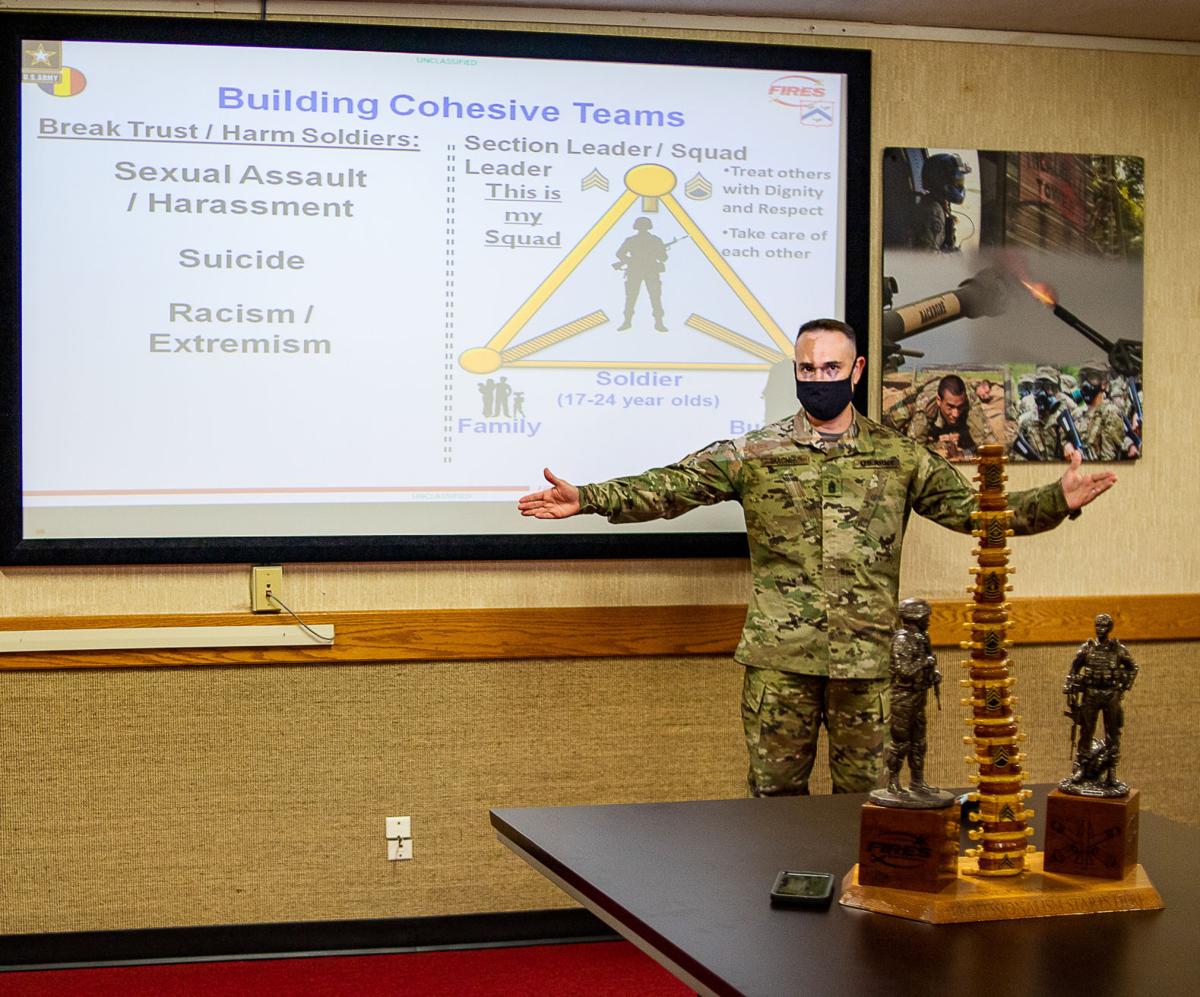 Command Sgt. Maj. Erick Macher, commandant of the Fort Sill Non-Commissioned Officers Academy, explains the “golden triangle” and its role in the “This is My Squad” initiative.

Fort Sill Command Sgt. Maj. Stephen Burnley, right, visits with a basic training soldier at the post bowling alley. Burnley said he makes a point to visit and talk with as many soldiers as possible and help them with any issues they may have.

Command Sgt. Maj. Erick Macher, commandant of the Fort Sill Non-Commissioned Officers Academy, explains the “golden triangle” and its role in the “This is My Squad” initiative.

“What can we do better?” is the question the Fort Sill senior enlisted adviser makes a point to ask every soldier he meets on the post.

For Fort Sill Command Sgt. Maj. Stephen Burnley, that simple question is just a small part of what Maj. Gen. Ken Kamper, Commanding General of the Fires Center of Excellence and Fort Sill, and the Army, are doing to reach soldiers deep in the ranks to combat what the Army calls the “Three Corrosives.”

Suicide; sexual assault, sexual harassment; and the combination of racism and extremism are three corrosive elements that Kamper, Burnley and the Army as a whole are looking to eradicate from their forces, especially on the heels of three recent suicides related to Fort Sill.

These factors were highlighted in a report released Dec. 8, 2020, by the Fort Hood Independent Review Committee during an investigation into recent deaths and other incidents related to Fort Hood, Texas.

The findings of the committee identified major flaws with sexual harassment and assault response prevention program from implementation, reporting and adjudication; fundamental issues with Fort Hood criminal investigation command field office activities that led to unaddressed problems on Fort Hood; and finally, a command climate at Ford Hood that was permissive of sexual harassment and sexual assault, the report stated.

While the independent review focused on the command climate and culture at the post, the findings contained in the committee’s report impacted the entire Army, including Fort Sill.

In response to the report, Army senior leaders recently established the People First Task Force to address the list of findings and recommendations within report.

The task force will analyze the findings and recommendations in the report to develop a plan that addresses the issues identified by the committee and reevaluate current policy and programs.

One the many initiatives commanders are implementing to reduce sexual assault, suicides and racism is the “This is My Squad” program, or TIMS.

TIMS is the brainchild of Sgt. Maj. of the Army Michael A. Grinston. The goal of the initiative is to build more cohesive teams throughout the U.S. Army. For inspiration, Grinston looked to Army Rangers and Special Forces soldiers — groups known for their unit integrity and camaraderie.

Grinston identified that special operations units tend to exhibit greater team cohesion than traditional Army units, he said in an interview with the Army Times. Their training is intense and creates shared hardships that all team members must bond together to endure. Additionally, because of the closeness of these teams, they usually have better knowledge of each individual team member and their families. This familiarity and cohesiveness helps unit leadership effectively anticipate problems that may arise so they can prevent or fix them early.

This ability for regular Army small-unit leaders to know and understand their soldiers was lost while fighting two wars and focusing on deployment and unit readiness over the individual, said Command Sgt. Maj. Erick Macher, Commandant of the Fort Sill Non-Commissioned Officers Academy.

For many soldiers, introduction to TIMS will begin at the Basic Leader Course, a school within the Non-Commissioned Officers Academy, where future non-commissioned officers from around the world attend for introduction to basic Army leadership skills.

TIMS, said Macher, is designed around what Army leaders call a “golden triangle” with an emphasis on character. He said the basic concept of showing ownership of a squad wasn’t a new concept in the Army but it’s something that needs to be amplified across the force.

“In the center of this triangle is the soldier,” said Macher. “At the top is the squad leader and to the left and right is the soldier’s family and buddies. Within this group someone will notice if the soldier is displaying any of the three corrosives and either guide the soldier back to where they need to be or get them the help they need.”

Macher said the goal of the Basic Leader Course is not only to develop tactical skills but character as well.

The People First concept is about emphasizing character and messaging character over competence,” Macher said. “That’s been kind of my philosophy the last 28 years I’ve been in the Army and one I’ve instilled into the institution and how we message Army values. It’s our duty to the Army, these young sergeants and up and coming sergeants for the Basic Leader Course to understand that foundation.”

Macher said this is a shift from previous iterations of the developmental course where the focus was more on tactics and regulations. He said the change was the result of the realization that there were very few instances of leaders being removed from positions or organizations becoming tainted by a lack of competence. He said most negative instances were a direct result of a lack of character.

While Burnley feels these programs and initiatives will go a long way toward eliminating the three corrosives, he’s taking a more personal approach.

Daily, the Post’s senior NCO will travel around to the various units under his charge and talk to soldiers. He will seek them out in the dining facilities, motor pools and bowling alleys to talk and see how they’re doing. These conversations are not as the Fort Sill Command sergeant major, but as a fellow solider in a position to help those who need it.

Burnley said he thinks a lot about the recent deaths of three Fort Sill soldiers and hopes these programs will prevent more suicides.

“There’s three names on my desk,” Burnley said. “Staff Sgt. Logan Carter, Spc. Simeon Funk and Warrant Officer Blake Munck. There’s not a day goes by that I don’t think about those soldiers and their families. I attended their services and spoke with their families. Maj. Gen. Kamper and I are working very hard in the hopes that soldiers feel they are part of this team and they don’t feel that (suicide) is their only alternative.”