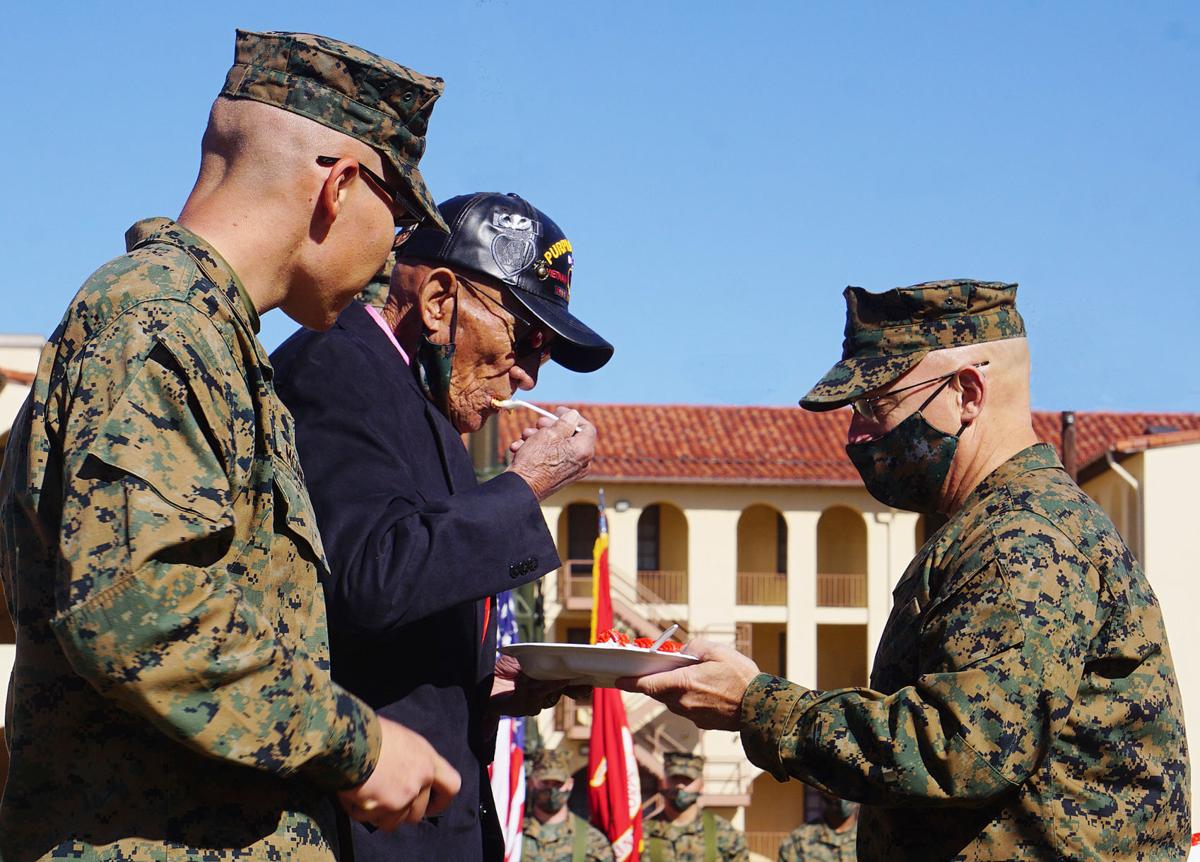 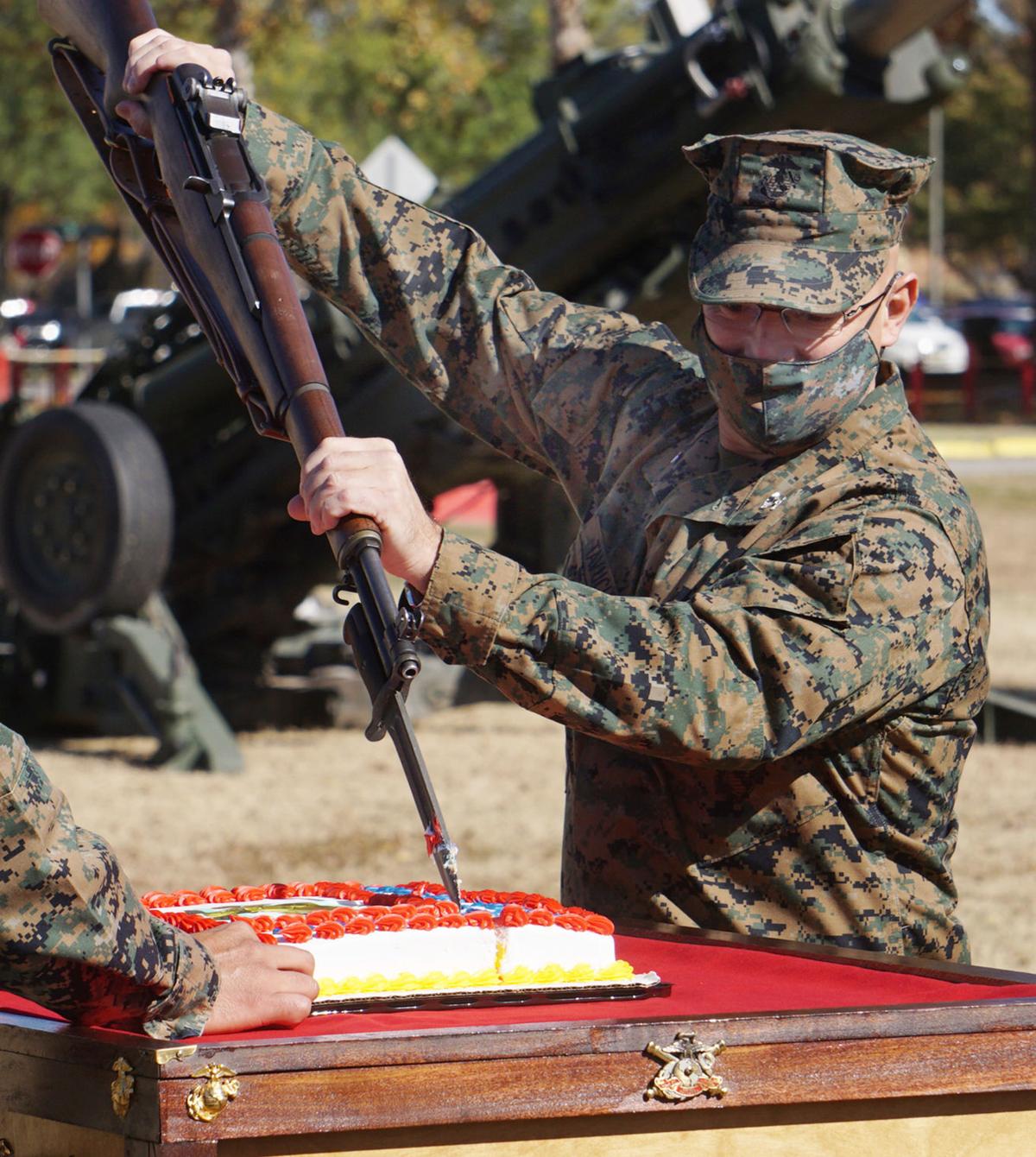 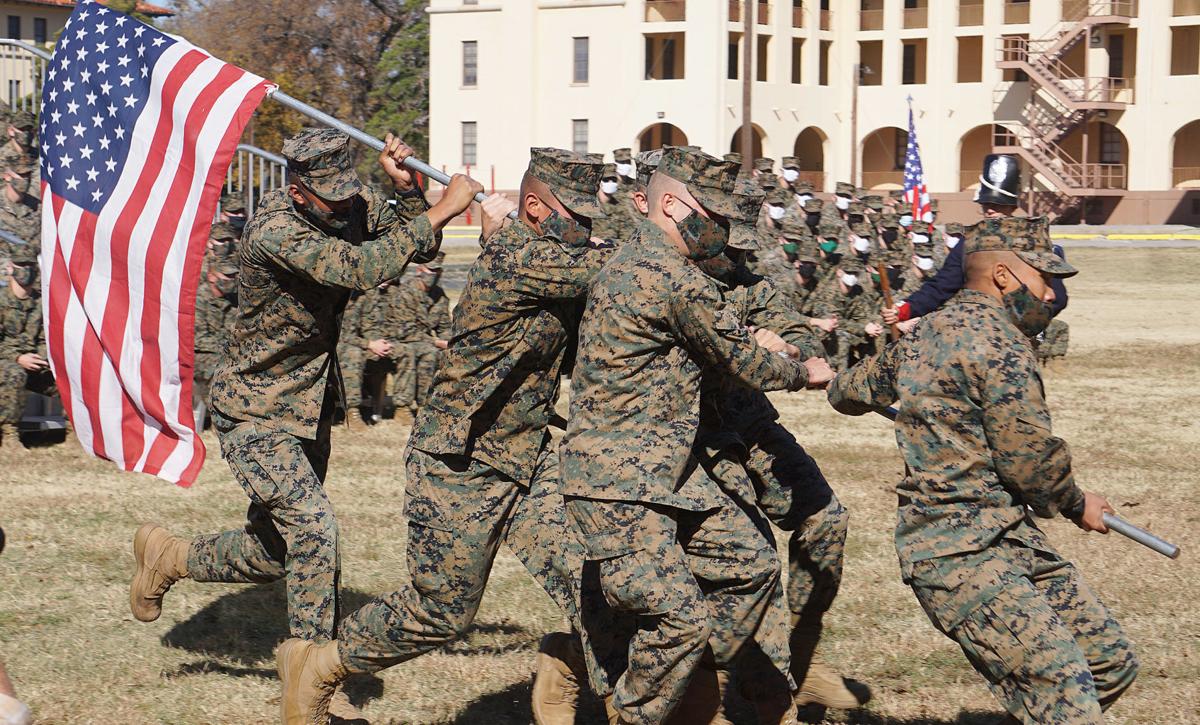 Marines reenact the Mount Suribachi flag raising during the celebration at Fort Sill.

Marines reenact the Mount Suribachi flag raising during the celebration at Fort Sill.

From the halls of Montezuma to the shores of Tripoli, Nov. 10 holds special meaning to those who wear or have worn the sacred eagle, globe and anchor.

Tuesday marked the 245th anniversary of the founding of the United States Marine Corps by a decision of the Second Continental Congress to establish two battalions of Marines.

Marines around the globe, whether in combat with a Marine Expeditionary Unit or part of the USMC Artillery Detachment at Fort Sill, took time to honor their founding with a ceremony steeped in tradition and pageantry. The celebration honors not only the founding of the Corps but also recognizes the history and traditions of Marines past, present and future.

“This is our birthday,” Marine Detachment Commander Col. Chris Tavchis said. “This is the birth of our Corps in 1775. The significance of today is the passing down of those traditions to the younger Marines.”

The Corps has always placed emphasis on its history and traditions to ensure every Marine, whether enlisted or officer, knows where one comes from, knows their past and lives up to the example set by those who came before them, said Tavchis.

Passing knowledge down from Marine to Marine is what has made the Corps what it is today and is symbolized through the passing of a piece of cake from the oldest Marine present to the youngest Marine.

Retired Sgt. Maj. Billy Grant of Lawton enlisted in the Marines in 1958 and served 27 years as an infantryman. Now at 80 years old, the Devil Dog had the honor of passing his piece of cake to Pvt. Ethan McQuivey, an 18-year-old Marine, and the youngest in the detachment, from St. George, Utah.

“In order for us to know where we’re going, we’ve got to know where we come from,” Grant said. “We recognize the younger generation because they’re the ones who are going to carry on those traditions that made my Corps what it is today.”

McQuivey acknowledged the hardships he’s faced in getting through bootcamp and said he understands the legacy he must uphold since earning his eagle, globe and anchor.

“Today helps me realize that I made it and the legacy I have to uphold because it is a great legacy,” McQuivey said. “The Marines around me today make me want to do my best to honor them and the Marines that came before us.”

Per tradition, Tuesday’s ceremony began with a reading of Gen. John A. LeJeune’s 1921 birthday message to Marines. On Nov. 1, 1921, LeJeune issued Marine Corps Order No. 47, Series 1921, which provided a summary of the history, mission and traditions of the Corps. Lejeune then directed the order be read to every command each subsequent year on Nov. 10 in honor of the founding of the Marine Corps.

Since that moment, the ceremony has expanded to include a cutting of the cake, a pageant of Marine uniforms dating back to their founding through current and, of course, the playing of the Marine Corps Hymn.

On November 10, 1775, a Corps of Marines was created by a resolution of the Continental Congress. Since that date many thousands of men have borne that name Marine. In memory of them it is fitting that we who are Marines should commemorate the Birthday of our Corps by calling to mind the glories of its long and illustrious history.

The record of our Corps is one which bear comparison with that of the most famous military organizations in the world’s history. During 90 of the 146 years of its existence the Marine Corps has been in action against the Nation’s foes. From the Battle of Trenton to the Argonne, Marines have won foremost honors in war and in the long era of tranquility at home generation after generation of Marines have grown gray in war in both hemispheres, and in every corner of the seven seas so that our country and its citizens might enjoy peace and security.

In every battle and skirmish since the Birth of the Corps, Marines have acquitted themselves with the greatest distinction, winning new honors on each occasion until the term “Marine” has come to signify all that is highest in military efficiency and soldierly virtue.

This high name of distinction and soldierly repute we who are Marines today have received from those who preceded us in the Corps. With it we also received from them the eternal spirit which has animated our Corps from generation and has long been the distinguishing mark of Marines in every age. So long as that spirit continues to flourish Marines will be found equal to every emergency in the future as they have been in the past, and the me of our nation will regard us as worthy successors to the long line of illustrious men who have served as “Soldiers of the Sea” since the founding of the Corps.

Devil Dog is a nickname for a U.S. Marine and is based on the use of "Teufelshunde" by German soldiers to describe Marines fighting in World War I. The nickname first appeared in April 1918 in newspapers throughout the United States.