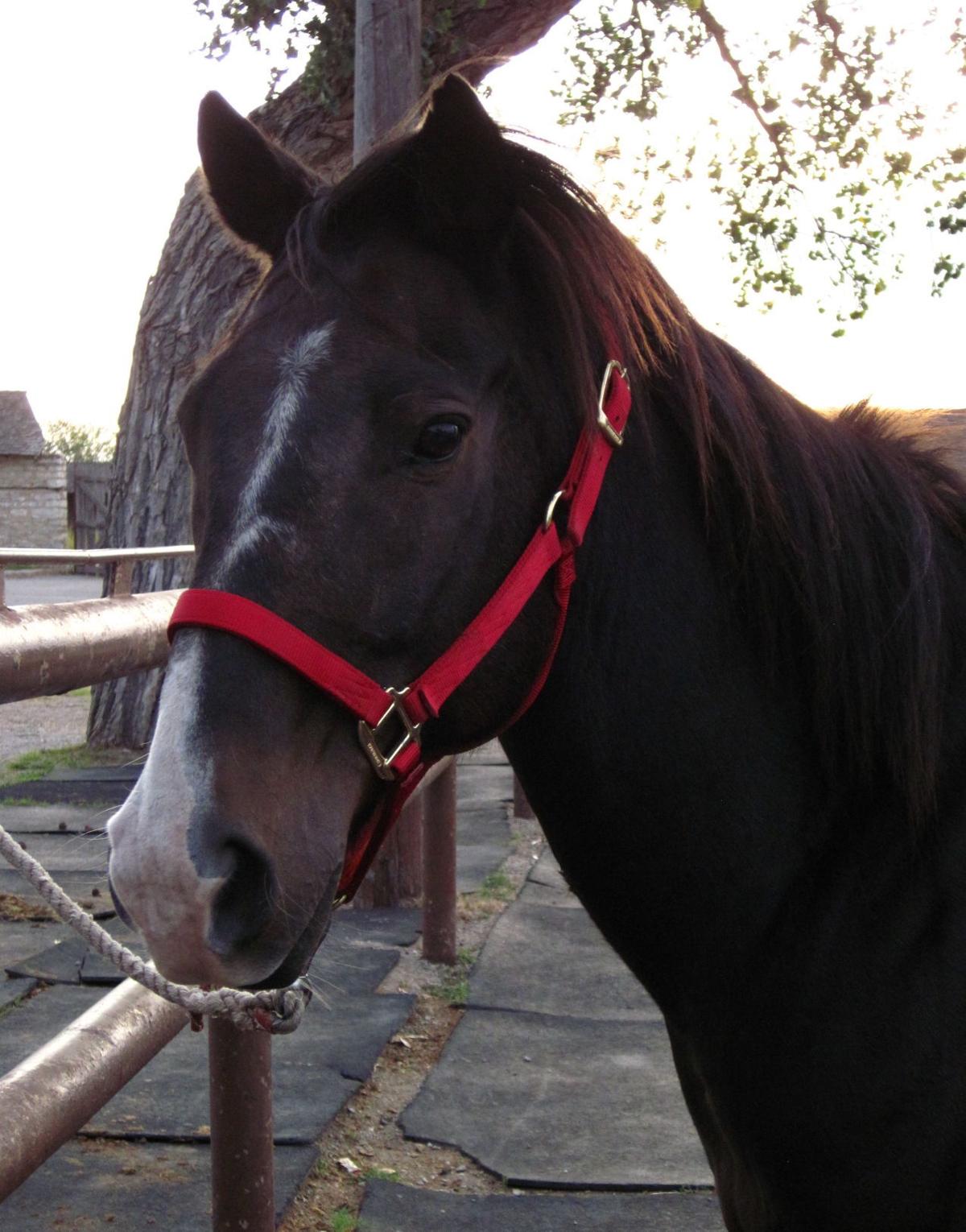 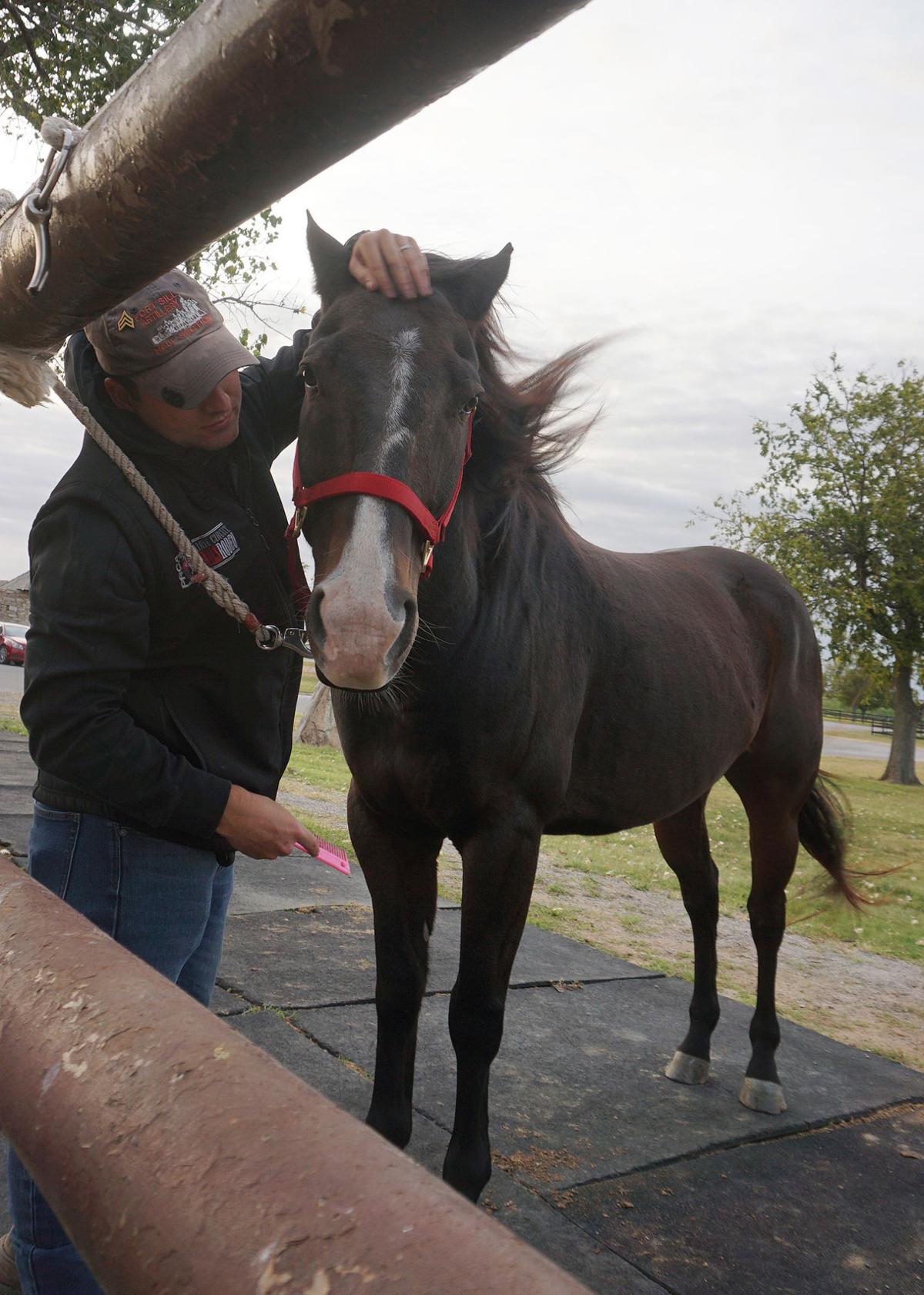 Sgt. David Naranjo grooms Sonny to prepare him for his media debut at the Fort Sill Artillery Half Section stables.

Sgt. David Naranjo grooms Sonny to prepare him for his media debut at the Fort Sill Artillery Half Section stables.

Weathering persistent 30 mile-per-hour wind gusts out of the north that blew his long mane back and away from his face, Sonny, a recent Fort Sill Artillery Half Section equine acquisition, made his official media debut Thursday morning at the Half Section stables on post.

The process of acquiring a new horse such as Sonny is inevitably prompted by a Half Section horse either becoming injured or upon approaching his retirement age, according to Section Chief Gerald Stuck. Two of the Half Section horses are in their early 30s now, he noted.

As circumstances warrant the addition of a horse, Stuck makes that selection only after carefully reviewing a 1935 cavalry remount manual and meticulously studying vintage 75-year-old photographs.

A candidate under Stuck’s consideration has to be between 15 and 16 hands tall, range in age from 7 to 12 years, and be bay (brown) in color with black points on the mane, tail, ear edges, and lower legs.

A horse’s height is measured in four-inch increments, the width of a hand, from the ground to the animal’s withers. A horse whose height is 15 hands stands 5 feet tall at the withers.

Also as per the manual, each equine Half Section candidate has to have medium bone structure and be gelded (castrated), saddle broke, and gentle.

Standing 15 hands (5 feet) tall at the withers, Sonny is a 12-year-old dark bay gelding with black points and a medium bone structure. He was purchased from Davis Farms in Marlow.

Early on, Stuck deemed Sonny a pretty gentle animal with a really good head, but has recently noted that his fledgling Half Section horse-in-training “doesn’t neck rein real well, but we’re working on that.”

The addition of Sonny in August brought the Half Section herd count to 11, one short of the dozen authorized on his property book, according to Stuck.

Immediately upon his arrival on post, each new animal is quarantined from the rest of the herd for 21 days. This three-week quarantine has long been an established practice at Fort Sill, and is implemented to make sure there are no infectious horse diseases which might be spread to the rest of the herd.

Following his release from quarantine, Sonny was “kept in a separate pasture for a week or two” where he could see and smell — but not touch — the other horses, said Stuck.

Since then, Sonny has gradually been introduced into the established Half Section herd and has grown quite comfortable around Dubia, the horse named in honor of past Fort Sill Commanding General Maj. Gen. John Dubia.

Sonny’s typical day begins with his morning feed at 7:30. An hour later, in harness, he is tied at the rail where his coat is brushed down, his mane and tail untangled, and his hooves cleaned and gently picked free of stones.

He is then escorted to the round pen for ground work and riding. At this point in his acclimation to the Half Section, Sonny spends half his time being ridden, and the other half in pasture.

Sonny’s incremental introduction to Fort Sill’s slate of official ceremonies these past several weeks has featured his participation in staff or trail rides, as well as in mounted Half Section land navigation exercises; and serving as a single mount during one official ceremony’s rehearsal.

The mounted land navigation exercise pitted two Half Section teams one against the other, as they each sought five points scattered across the installation, bracketed by such distant historical landmarks as Geronimo’s grave and Medicine Bluffs.

This sort of controlled exercise exposes Sonny to unfamiliar roads and to the everchanging ebb and flow — and noise — of vehicular traffic, while in the secure and familiar company of half his herd.

Sonny’s participation in ceremony rehearsals further acclimates him to the initially startling — from his perspective — myriad sounds and movement of people in crowds, the snap and motion of brightly colored guidons and flags, the music and marching of the band, and Soldier formations on a parade field.

Stuck is more than pleased with the progress of his latest mount, saying, “He is going to make a great Section horse.”