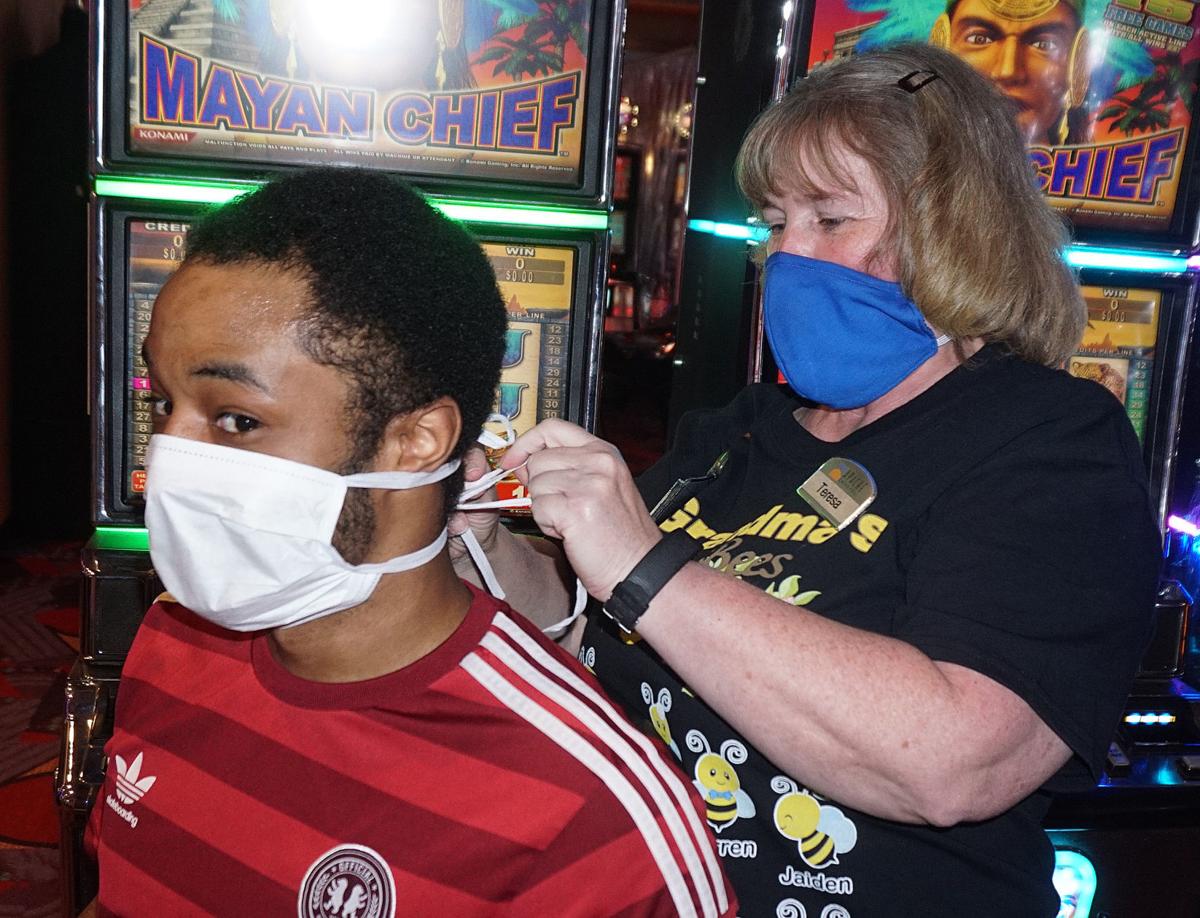 Jarviear Christon gets help with his mask from Apache Casino Hotel EVS Manager Teresa Smith. All employees and gamers will be wearing masks when the facility reopens Thursday. 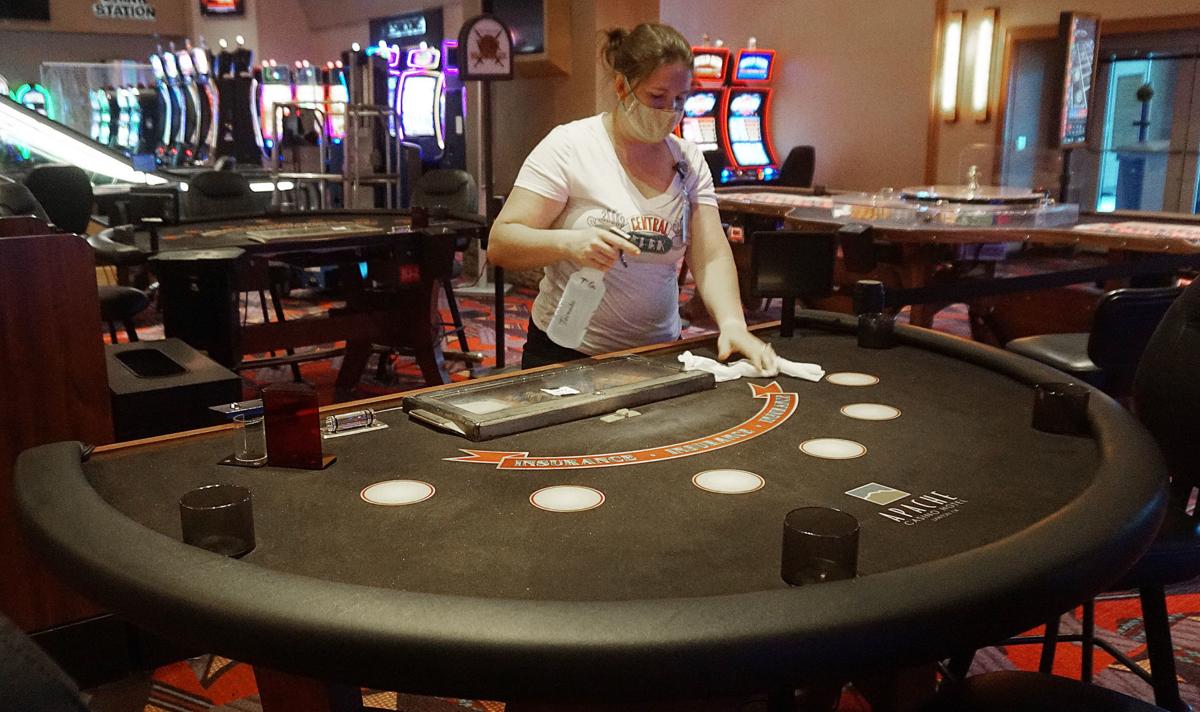 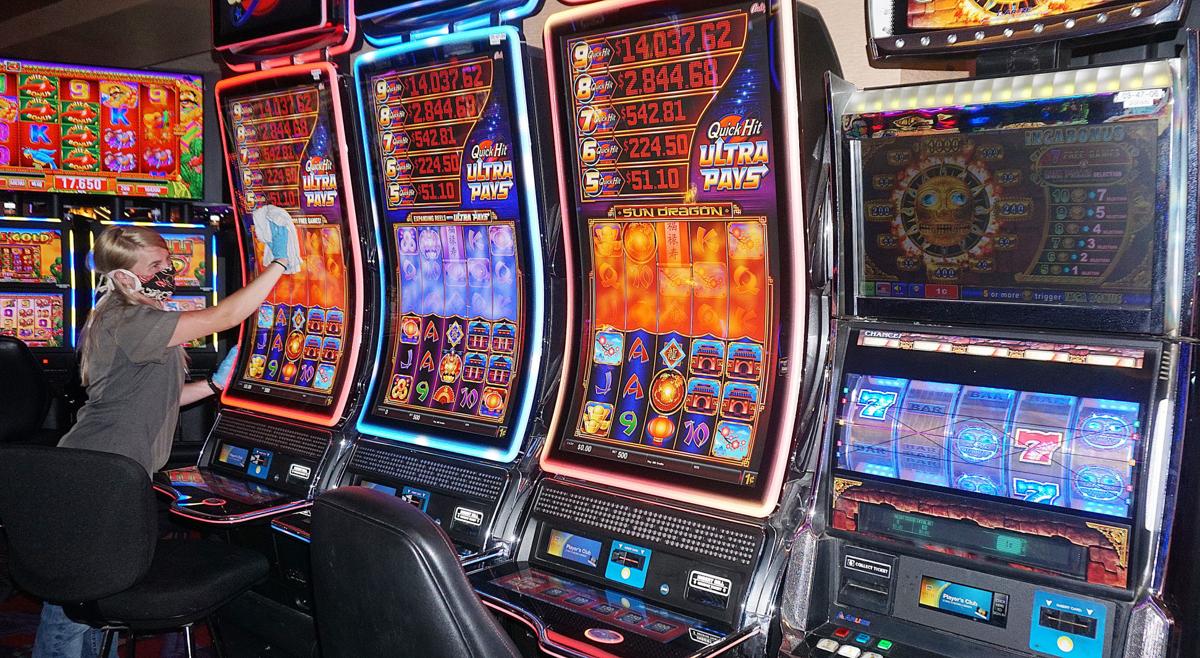 Jarviear Christon gets help with his mask from Apache Casino Hotel EVS Manager Teresa Smith. All employees and gamers will be wearing masks when the facility reopens Thursday.

After two months of being closed for business due to the COVID-19 pandemic, the Apache Casino Hotel is opening its doors for gamers.

Beginning at 10 a.m. Thursday, the casino, 2315 E. Gore, will resume its gaming role with an eye of caution toward the spread of the virus. The venue is the first run by a local tribe to open following the shutdown in mid-March.

Visitors will be greeted at the gaming center’s two entrances where they will undergo a screening process that includes some questioning, a temperature check and hand sanitization, according to Lee Bayless, event center manager.

Just like all of the staff, Bayless said visitors will need to wear a mask. If you don’t have one, you’ll be able to purchase one at the entry access.

The venue will be open from 10 a.m. to 2 a.m. daily. Teresa Smith, cleaning team manager, said that deep cleaning will take place while the venue is closed each night and there will be ongoing cleaning throughout the day. Visitors will have access to 20 sanitization stations.

Smith feels confident that things will go well because her staff is prepared.

“I’m ready, we’ve got this ball rolling,” she said. “We have taken every precaution.”

Bayless said that’s an attitude that the entire team is shouldering. There will only be 350 gamers allowed in at a time. Those who don’t make the cut will be able to leave their number and be text messaged a notification when an opening is available to gain entry.

One change for those visiting is that, during this phase of reopening, the casino will be non-smoking, Bayless said.

The games will have separated seating to stay in line with social distancing measures. But there are plenty of games available. Bayless said some of the top games will have dividers between them to shield contact between visitors.

The casino’s table games will be open. Bayless said it’s something that appears to be unique to the venue at this point.

“I think we’re the only place in the state that will have table games open,” he said.

The blackjack tables will be able to accommodate four players. Bayless said that plexiglass shields will separate the dealers and players and there will be plexiglass dividers separating the players safely.

“It sort of looks like a wagon wheel,” said Mike Bechard, director of table games. “Most of the others I’ve seen have three (dividers) but these are ones we found from out of Las Vegas.”

The craps and roulette tables will also accommodate smaller numbers of players. Bayless said that instead of 12 players, there will be between four to six at each table.

Bayless said the hotel will remain closed for the time being, as will the 360 Restaurant. He said management is going to “wait and see what the demand is” before determining its reopening date.

The coffee bar and the grill will remain open. Diners will be able to eat at tables that will line the hall in front of the event center entrance to allow proper distancing.

Another change will be at the beverage stations located throughout the venue. Bayless said that instead of it being self-serve, there will be an employee available to fill and refill drinks.

The time off has allowed the staff to conduct deep cleaning in every conceivable nook and cranny. Bayless said many games were opened up and given a cleaning that would have been almost impossible before the shut down.

Bayless has visited some of the state casinos that have already opened to take a look at how they’re operating. It was enough to convince him that Apache Casino Hotel is doing things right.

“Our property was cleaner during operations than others following deep cleans during the shutdown,” he said. “Our standards of cleanliness supersede anybody else in the state, in my opinion.”

Bayless has been busy rescheduling the live concerts and events scheduled over the shutdown. Right now, the event center is set up as social distance seating. Many of the upcoming shows will have to allow for a smaller audience than originally intended. It’s a strange pickle to taste for the long-time event promoter.

“It’s wild, in booking concerts, I’ve been trying to get as many people in as I can,” he said. “The variables for now are tough to figure out but we’ll get it right.”

If you bought tickets for one of the postponed events, you’ll be able to use them for the newly scheduled dates, according to Bayless. You can view details about the rescheduled shows online at https://www.apachecasinohotel.com/events/.