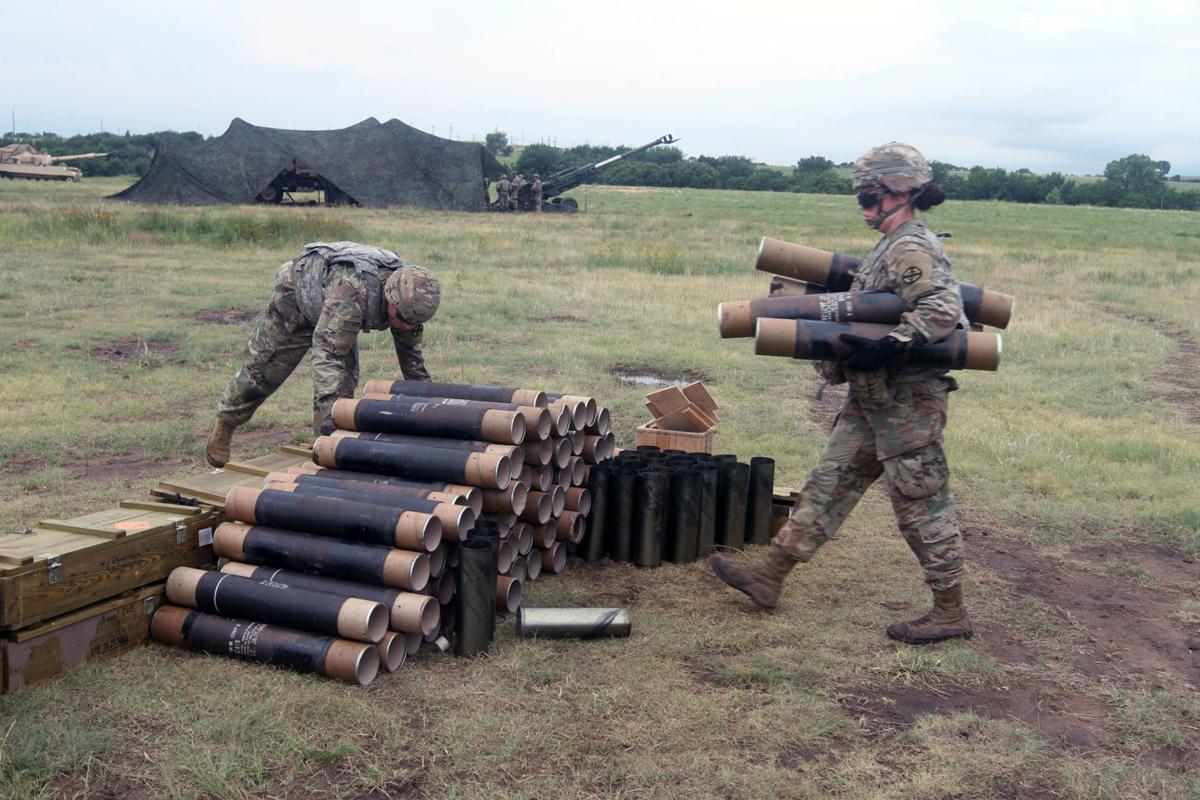 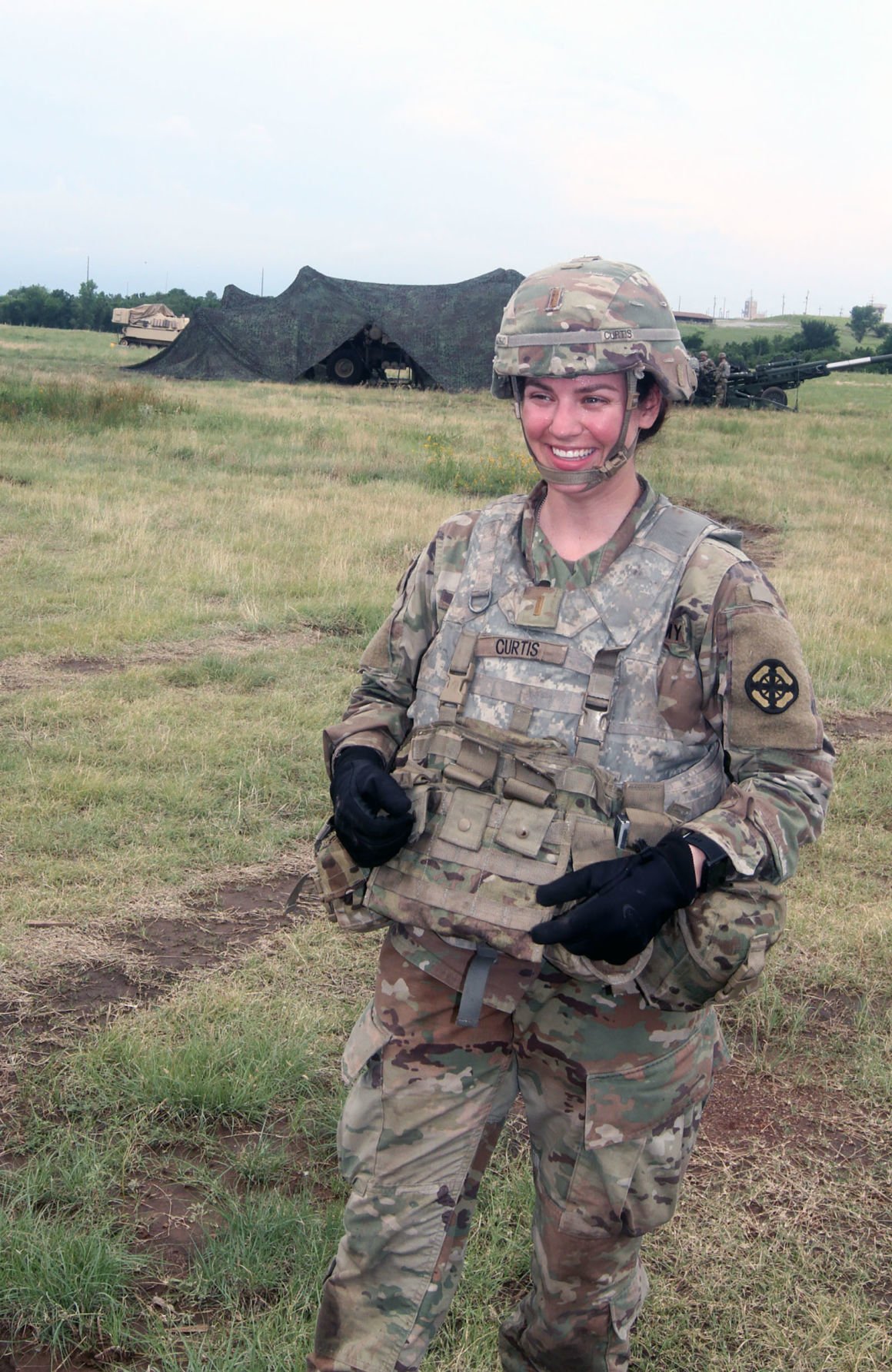 2nd Lt. Alexandra Curtis, Miss Rhode Island 2015, speaks with reporters after spending days on Fort Sill’s muddy West Range, displaying her aptitude for blowing things up along with the other field artillery lieutenants. 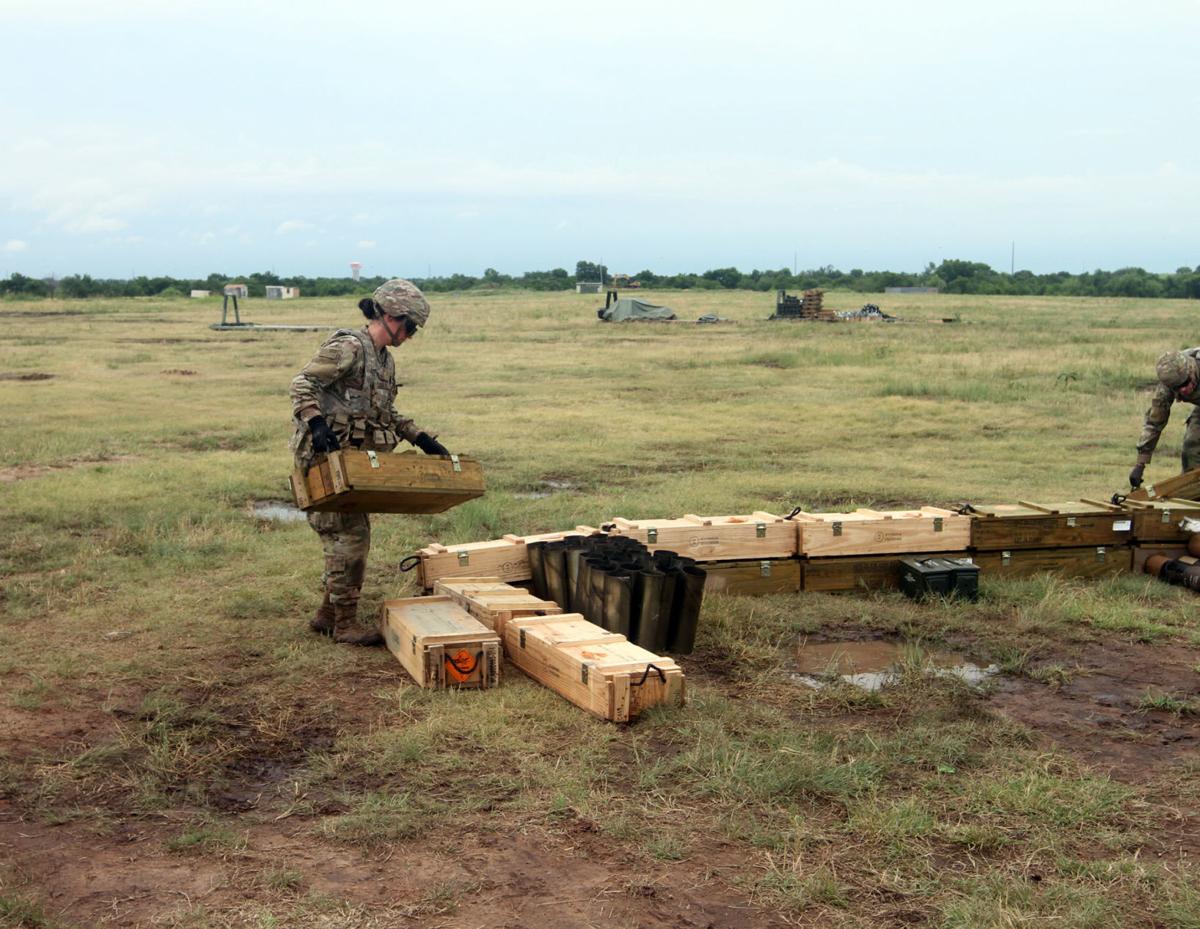 Second Lt. Alexandra Curtis, the 2015 Miss Rhode Island, reveals another side of her public persona by adding one more ammo box to the pile at a training site on Fort Sill’s West Range.

2nd Lt. Alexandra Curtis, Miss Rhode Island 2015, speaks with reporters after spending days on Fort Sill’s muddy West Range, displaying her aptitude for blowing things up along with the other field artillery lieutenants.

Second Lt. Alexandra Curtis, the 2015 Miss Rhode Island, reveals another side of her public persona by adding one more ammo box to the pile at a training site on Fort Sill’s West Range.

Gone are the days when “your mother wears Army boots” was a familiar playground taunt.

“For all the years I spent in high heels, I really hoped that one day I’d end up in combat boots, so I’m happy to be in these boots,” she said with a smile.

Assigned to 1st Battalion, 30th Field Artillery for the duration of the 18-week course, she was out on the gun line with her fellow cadets Tuesday demonstrating the lieutenants’ proficiency on two howitzers, the M119 and the M777.

“I’m having the best time,” she averred.

Curtis said she got to be on the M119 gun crew, and she found it really exciting to be right there with the action. She also got the ammo ready to load and held up the powder bags to show that the howitzer had the correct charge for each round.

“We’ve been working in the classroom over the course of the past five months doing all of the mathematical computations behind these weapons, learning different jobs, and here we are, putting everything all together for a real live-fire exercise,” she explained.

Upon graduation, the newly minted FA lieutenants will go to their respective units across the country and around the world. Curtis will report to 1st Battalion, 103rd FA at 7 a.m. Monday as the first woman from Rhode Island in field artillery.

Curtis joined the Rhode Island Army National Guard more than three years ago as a human resources specialist. She did that job for a short while before deciding she wanted “something a little more hands-on and a little bit more boom-and-bang.”

She worked in the Rhode Island National Guard’s public affairs office for the past two years, and that is her primary duty. But on the reservist side she will be a field artillery officer in a unit fielded with the Triple 7.

“Five years ago I was in a totally different place. I was getting ready to compete for Miss America. I was representing Rhode Island, and I knew I wanted to do something to serve my state and my country, far beyond my time as Miss America or as Miss Rhode Island. So my goal at the end of all of that was to eventually enlist, join the Army and one day become an officer. And that’s been my career trajectory over the past three years,” she said.

“It’s definitely a drastic transition. A lot of people think, ‘Okay, beauty queens, Army, especially field artillery – the two things don’t really go hand in hand.’ But there’s a lot of grit and discipline and determination that comes along with all of those,” she confirmed.

As the 2015 Miss Rhode Island, her platform was “Leading Ladies: Equipping Young Women with the Skills to Lead.” The goal behind that was getting more women involved in leadership positions.

At college she walked into a student government meeting and saw that there were no women representing the student body. She felt as if she was in a fraternity meeting, and she made it her goal to get more women involved in scholastic leadership positions. She eventually became vice president and president of the Syracuse University Student Association.

“So it shows women across the world, really, that they can do anything that they want to do. A lot of people say field artillery is going to be rough, especially as a female, and I said, ‘I’m up to the challenge.’ And that’s the kind of spirit I take with me as Miss Rhode Island, and that’s the kind of spirit I have with me in the Army,” Curtis said.

“Especially with all combat roles being opened to women, we want to know and show that we have females who are leading these troops. We welcome them into our ranks, and they can definitely do the job. We don’t want to be missing out on half the talent of our entire population, so we welcome women into these roles and I’m very excited to be the first woman going into the field artillery in Rhode Island,” she said.

She said it’s been incredibly fulfilling for her because she has a great sense of duty, and there’s a sense of purpose in serving others and serving her community.

“It’s the best thing I could do at the end of the day. I love my job, and I love my work with the Army, and I couldn’t imagine myself doing anything else.”

She said the Rhode Island National Guard treats her just like they do anybody else. However, she does have the unique experience of having the 1989 Miss Rhode Island in her chain of command as the chief of staff.

“She actually swore me in when I enlisted, so she’s been a great mentor to have, and we kind of have a unique sisterhood in bond because of that,” Curtis said.

Sgt. 1st Class Marvin McBride of B Battery, 1-30 FA, said the lieutenants’ final training exercise tests them on everything they’ve learned over the past 18 weeks, to include fire support on the hill. Down on the gun line they hone their skills on AFATDS (Advanced Field Artillery Tactical Data System) shooting digital, and the M109A6 Paladin howitzer as well as the M119 and the Triple 7. They also build their leadership skills.

McBride said that due to COVID-19 this class of BOLC got two shoots instead of the usual four. In comparison, the heavy rains of the past five days were only a minor inconvenience.

“The weather’s been great. If it’s not raining, you ain’t training,” he quipped.