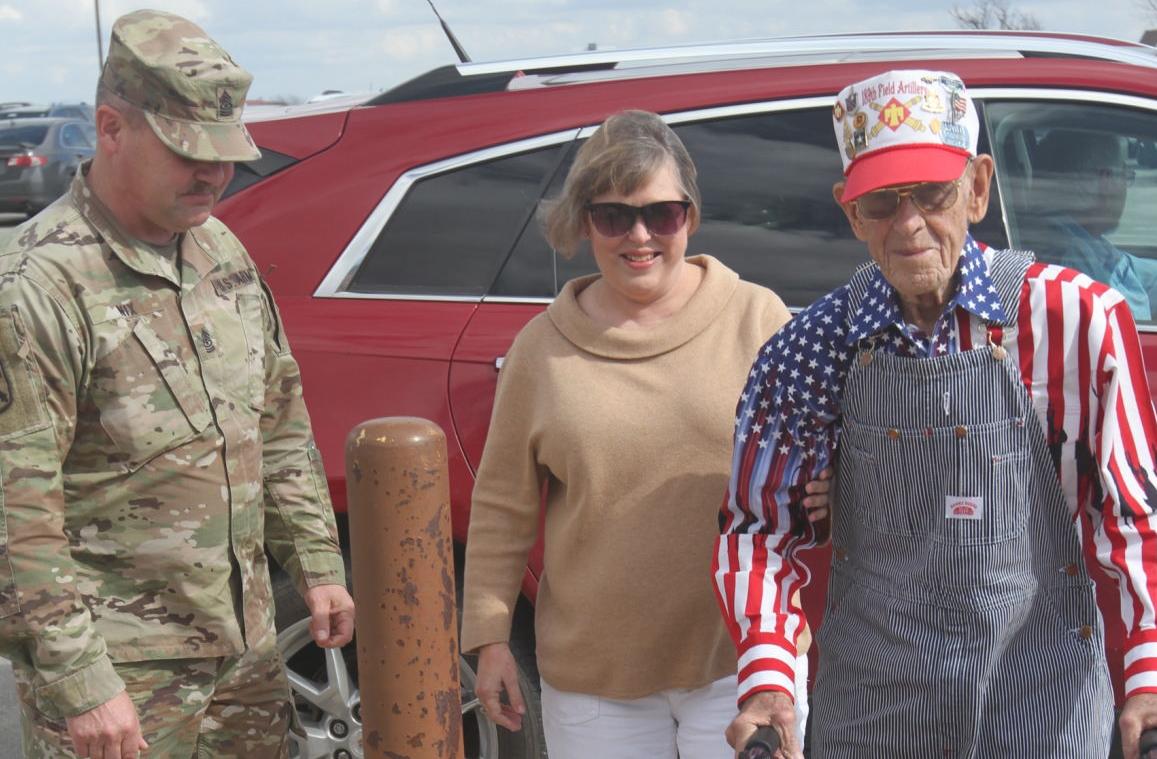 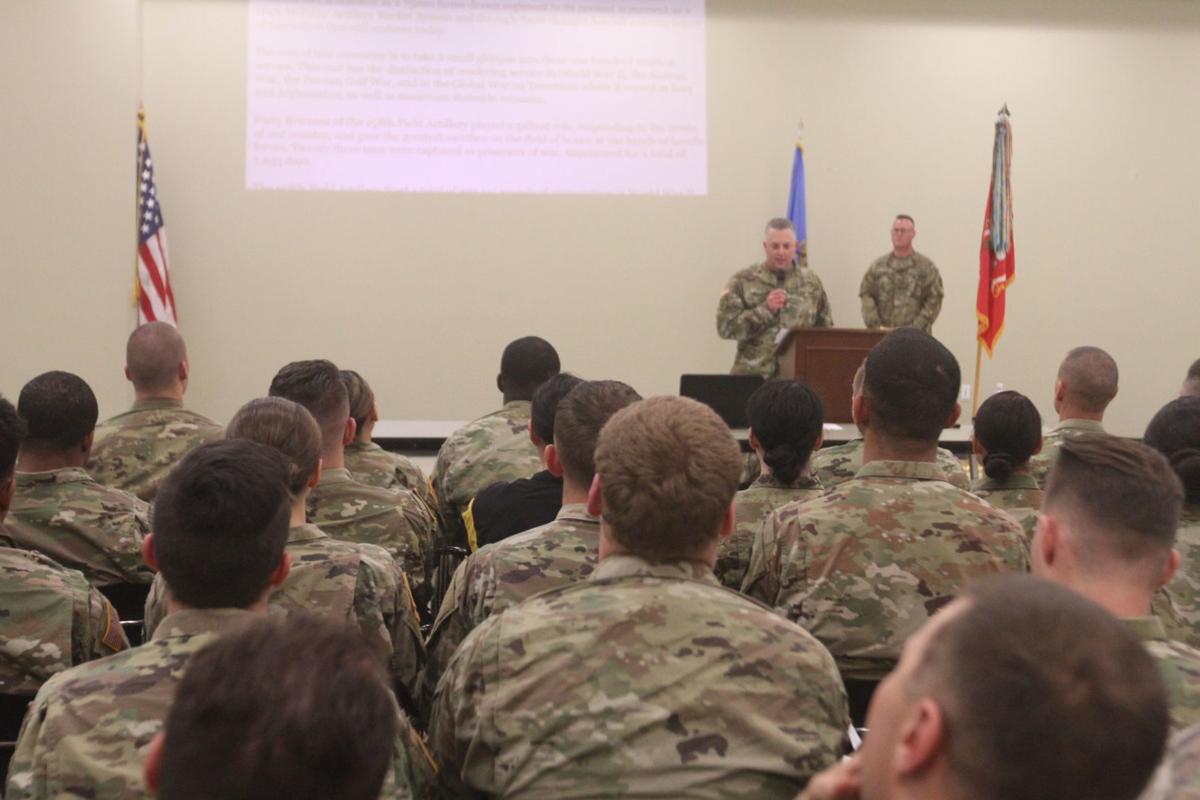 Its 100 years of writing history began with a letter to the War Department Militia Bureau in Washington, D.C., dated Feb. 26, 1920. The major general who drafted the letter called for an allotment of National Guard to the State of Oklahoma that would include a field artillery regiment equipped with 155-mm howitzers.

One veteran who will be 102 next month traveled from Chickasha to be present for the occasion. Chief Warrant Officer 4 William Gordon Spangler fought in both World War II and the Korean War. He got a standing ovation when he was introduced and one of the new battalion coins from battalion commander Lt. Col. Charlie Neely at the conclusion of the ceremony. Spangler was accompanied by his daughter and son-in-law, Mandy and Richard Keller, also of Chickasha.

“It’s a testament to the servitude and servant heart of soldiers who’ve been in 158 to show up for this. I’ve served virtually my whole career in the 158, so I know my heart is there and seeing all of you today just goes to show me that I’m not the only one here,” Neely said in his opening remarks.

Everyone in attendance received a bound 58-page volume by retired Command Sgt. Maj. John T. Jenson that provided a wealth of information about the battalion’s exploits, its 45 fallen heroes and 23 prisoners of war, its deployments, changes in weapon systems over the years, and details about the symbolism on its unit crest, insignia and guidons as well as its motto, “Unusual Efforts Expended.”

1-158 FA Command Sgt. Dave Slezickey provided a broad outline of the battalion’s storied past, interspersed with remarks from:

• Retired Brig. Gen. Larry Haub, who commanded the battalion when it deployed in support of Operations Desert Shield/Storm in 1990-91;

• Retired Col. Greg Lankford, battalion commander when it deployed for a force protection mission based out of Camp Ramadi, Iraq, in 2008-09;

• And finally Jenson, with an entertaining anecdote about a commander who let the troops vote on whether to go on a 12-mile ruck march in the rain at Camp Polk, La., or spend the day eating munchies at the PX. They unanimously voted for the latter, and he told them to get their weapons and get ready to march.

“You’re not here for a lesson in democracy, you’re here to protect democracy,” was the takeaway from this object lesson.

Slezickey noted that 120 soldiers from A Battery, 1-158 FA, got on a plane Friday night and landed in theater about 3 p.m. Saturday. A 30-soldier mission from B Battery will be heading out the door later this spring.

The battalion started off with a horse-drawn regiment and transitioned through various weapon systems to get to the HIMARS launchers it shoots today, Slezickey said. By World War II its howitzers were towed by “tractors” (actually trucks) and self-propelled howitzers came to the unit during the Vietnam War.

As he provided snapshots of the battalion at its many stages, Slezickey observed that the organization has gotten slimmer and leaner over the years.

“There’s no Charlie Battery any more. A few years ago we dropped the Charlie Battery,” he lamented. “We also got rid of the armories and moved into these big centers right here. One opportunity it’s presented is we have a lot of soldiers that can transition between (Headquarters and Headquarters Battery), Battery A, Battery B and 120th (Forward Support Company) all in the same building and still stay in the same unit.”

Slezickey said the battalion was activated from 1940-45 for World War II, when the 45th Infantry Division saw 511 days of combat while fighting from Sicily to Munich, Germany. Spangler was one of those citizen-soldiers.