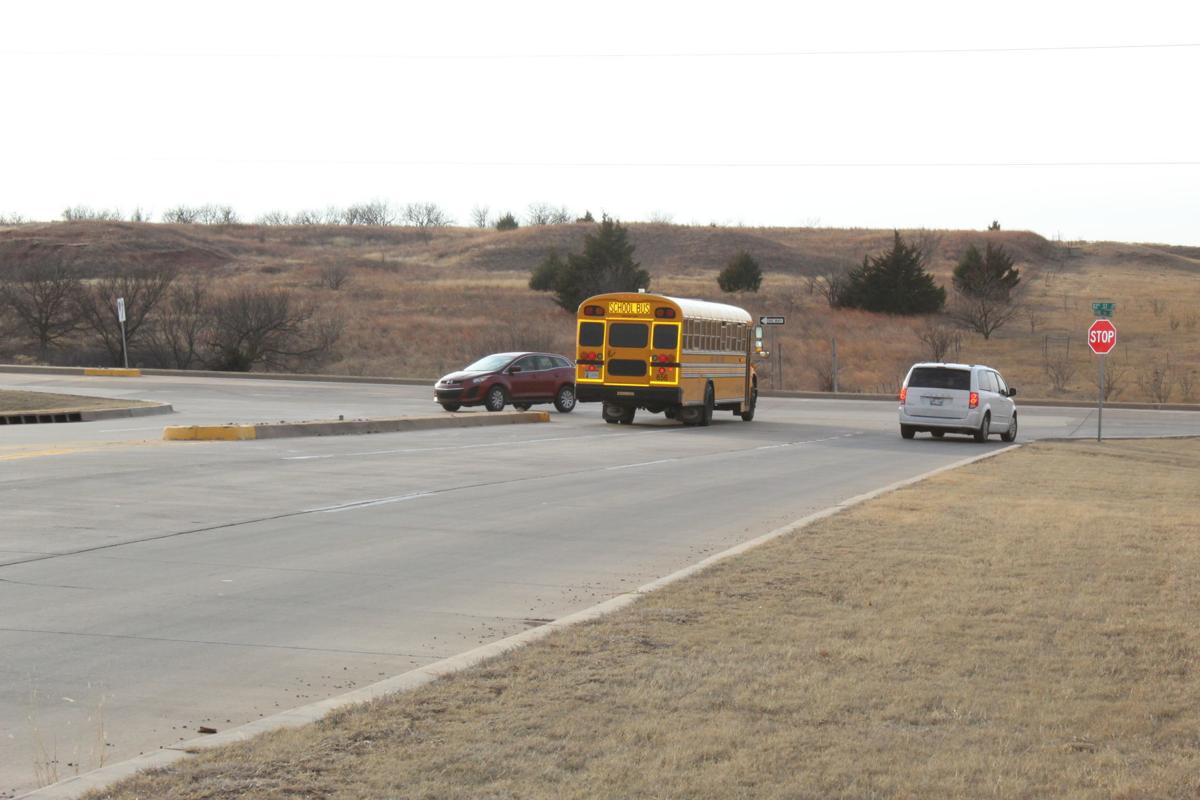 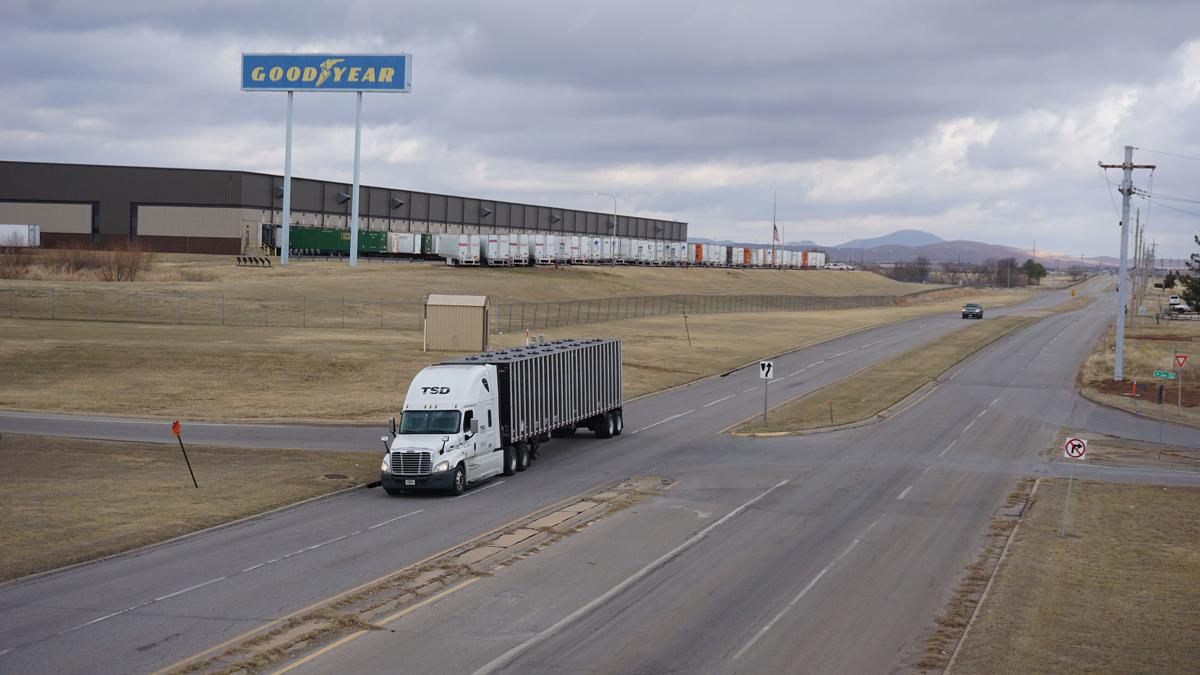 A truck passes the Goodyear Tire plant in west Lawton, using the industrial park’s main access: Goodyear Boulevard. Upgrades to that road are among the infrastructure improvements outlined for city officials in a master plan developed for the west Lawton industrial park sites.

A truck passes the Goodyear Tire plant in west Lawton, using the industrial park’s main access: Goodyear Boulevard. Upgrades to that road are among the infrastructure improvements outlined for city officials in a master plan developed for the west Lawton industrial park sites.

Lawton has the estimated costs. Now, officials have to assign priorities to the infrastructure work that must be done in its west industrial park sites.

The Oklahoma City-based engineering firm Garver has completed analysis for a master plan it is developing and the short version: there are $117 million worth of infrastructure upgrades for the 320 acres the Comanche County Industrial Development Authority (CCIDA) owns north of the existing west industrial park (site 1), 215 acres it is negotiating to buy immediately east of that site (site 2), and 480 acres it owns south of Lee Boulevard and the Goodyear plant.

One surprise in the draft plan: Garver thinks extending West Gore Boulevard beyond its termination at Southwest 82nd Street is more pressing than a traffic loop for industrial traffic.

Mary Elizabeth Mach, project engineer for Garver, said heavy industrial sites have specific needs: electricity, water/sewer, telecommunications, natural gas, solid waste management, site access, airport access and rail access. She said Garver already knows some needs aren’t a problem. For example: PSO has said it will provide electrical access to the park sites “as long as the need is there” and airport access is taken care by Lawton-Fort Sill Regional Airport, which is nearby.

That’s why most of last week’s discussion with local officials (which will be woven into the final report) focused on water and sewer access, and a transportation grid.

The biggest surprise in discussions may be that Garver engineers indicated it is more important to focus on existing roads than to build a traffic “loop.”

City and economic development officials discussed that loop for years, referring to creation of a truck access route linking the industrial area to Rogers Lane and Interstate 44. That would be done by extending Goodyear Boulevard north, beyond its termination point, to tie it into the Rogers Lane/U.S. 62 overpass on Lawton’s far west side.

Cord Westphal, Garver engineer, said the rationale is reducing travel time for truck drivers while minimizing the impact on residents who share arterials with those truckers. The loop system could be done in phases between 2025 and 2040.

But, Garver’s analysis shows the project “won’t have a huge impact” on residents, as far as development and traffic counts, although it will be helpful to truck traffic, Westphal said.

Garver engineers had other suggestions for improving transportation, including an already-approved plan to repair Goodyear Boulevard and to upgrade existing industrial park roads “to withstand (increased) truck traffic,” Westphal said. City and LEDC officials already are looking at plans to rebuild Ard Street and Neal Boulevard inside the industrial park.

Westphal said while Lawton could pursue its traffic loop — he recommended looking for funding partners — Garver’s recommendation will be to focus first on roads within the industrial park and the Gore Boulevard extension.

The costlier infrastructure project is wastewater, getting rid of water after it has been “used” by industrial tenants, and there are four options, from transporting the water into the city’s system to building a new treatment plant.

Garver engineer Cole Niblett said analysis estimated a wastewater demand of 1.05 million gallons a day (mgd) for sites 1 and 2, or 1.95 mgd for all three sites. He said a 12-inch forced main would be sufficient to serve the two sites, but suggested a 20-inch main to serve all three sites.

City Manager Michael Cleghorn has concerns about that industrial water, asking about treatment criteria. He said the City of Lawton already is having treatment problems at the Republic Paperboard plant, which the city and plant officials are addressing (with options to include a new sewer line, city officials said).

• Place wastewater in holding basins, then discharge it gradually into the City of Lawton system (meaning construction of a forced main and detention lagoons). Estimated cost: $5.7 million for sites 1 and 2; $7.5 million for the third site. Mach said this option is the “best value.”

• Total retention, meaning water would be held in lagoons until it evaporated or was used for irrigation. This would mean 38 acres for primary lagoons and 32 acres for secondary lagoons for sites 1 and 2, or 370 acres for all three sites. Estimated cost is $16.9 million for all three tracts.

• A new wastewater treatment plant to serve the industrial park, a 12-acre facility to treat 2 million gallons a day (mgd). Estimated total cost (the plant could be built in phases) is $35.5 million.

• A treatment system that would allow for non-potable use of the treated industrial water by near-by industry. Goodyear, for example, could use such water for its tire cooling processes and cooling towers, Nisbett said. This option would add $4.5 million to the option three cost.

Niblett said Garver, basing its analysis on the average daily usage by Goodyear, projected an average usage of 2.03 mgd for the three undeveloped tracks, with a peak demand of 4.59 mgd for sites 1 and 2.

Niblett said an existing 24-inch water main along Goodyear Boulevard can be accessed by sites 1 and 2, but an extension is necessary for the acres south of Lee Boulevard. Analysis indicates 1 mile of 20-inch water main for that site, information that would be confirmed with a hydraulic study conducted with the City of Lawton.

• Natural gas: CenterPoint has mains near the industrial tracts, meaning about 15 miles of line would be needed to tap those mains. That’s a cost of $15 million, under estimates that are two years old, CCIDA members said. City economic development experts have said the existing line that supplies natural gas to the industrial park is nearing capacity.

• Rail: “All parcels need spurs,” Westphal said, of linking tracts to the Stillwell Railroad. Estimated total cost is $4.376 million for all three tracts, with $2.25 million for the site south of Lee Boulevard.