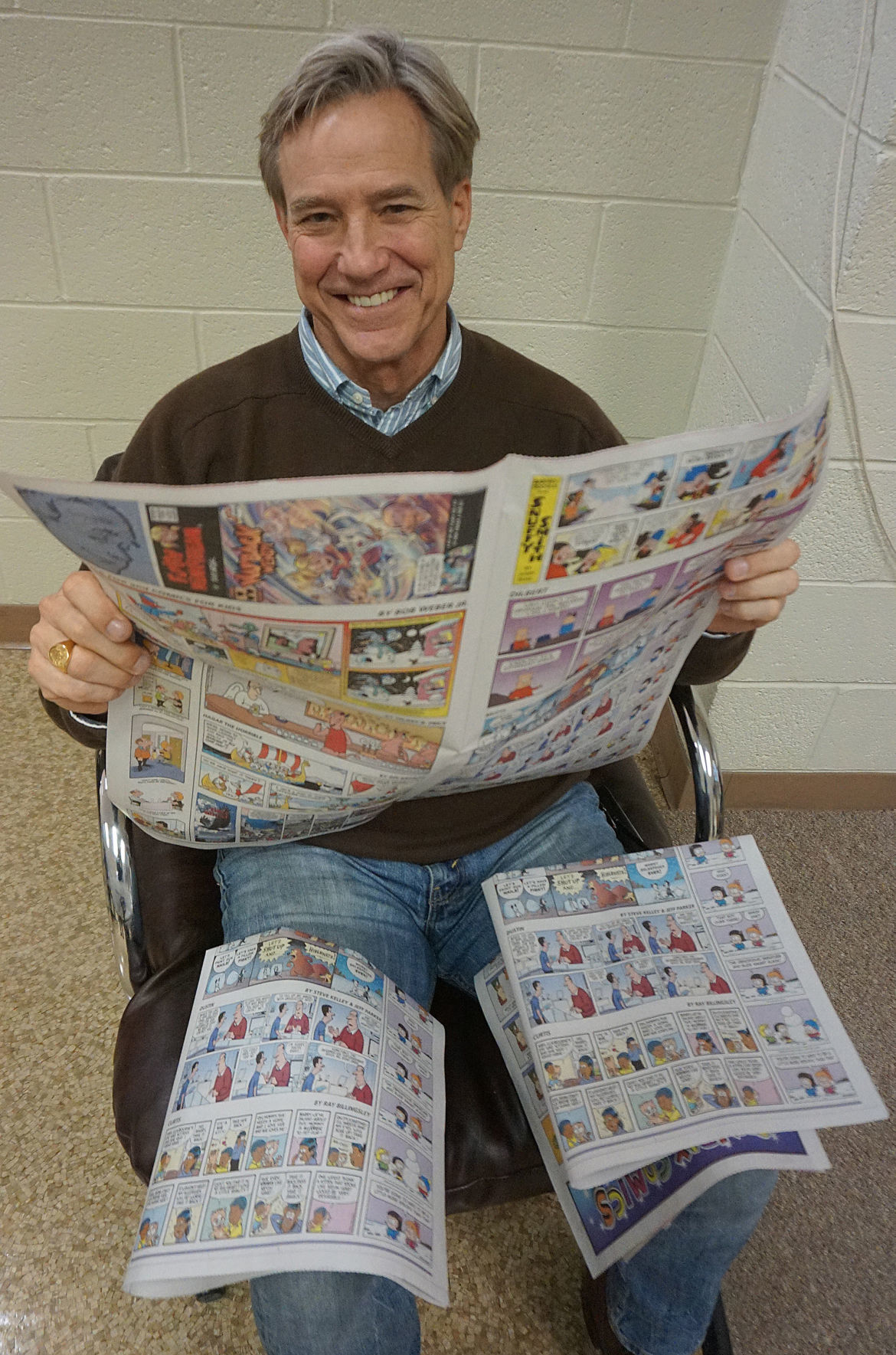 Steve Kelley, the writer of the Lawton Constitution’s newest comic strip “Dustin,” recently visited the paper on his way through Oklahoma.

This is one of Jeff Parker’s favorite strips. Parker illustrates “Dustin.” Together he and Kelley make up the creative team behind the series.

Steve Kelley, the writer of the Lawton Constitution’s newest comic strip “Dustin,” recently visited the paper on his way through Oklahoma.

This is one of Jeff Parker’s favorite strips. Parker illustrates “Dustin.” Together he and Kelley make up the creative team behind the series.

It’s not often that readers get to decide which comic strips appear in their Sunday newspaper. But The Lawton Constitution put the future of our weekly comics in your hands by allowing you to vote on a new featured strip. The winner, by a landslide, was Steve Kelley and Jeff Parker’s “Dustin.”

“Dustin” is a contemporary comic strip. It premiered in 2010 and followed the Kudlick family, particularly the titular character of Dustin, a recent college graduate who moved back in with his parents after failing to find steady work in the post-recession American economy.

“Dustin” was launched during a time when the comic industry was shrinking. Kelley and Parker were told by their publisher, King Features, that the duo would be successful if “Dustin” were running in 35 newspapers by the end of its first year.

By the end of their first year, the strip was appearing in 200 newspapers.

“I think ‘Dustin’ tapped into a trend that was developing in America where young adults were moving back in with their parents and having to find their way in a difficult economy,” Kelley said during a recent trip to Lawton. “I think people were sympathetic to that, but at the same time I think it created a dynamic that generates a whole lot of humor.”

Kelley began writing comedy and performing standup in 1985 in San Diego. He has made several appearances on the “The Tonight Show” over the years, and his political cartoons are syndicated in newspapers across the country.

When he approached his friend and fellow editorial cartoonist Jeff Parker about teaming up on a comic strip, he had already been developing “Dustin” for a few years. The challenge of creating a daily strip was too much to take on for one person, Kelley said, but he knew together they could make it work.

“When Steve phoned me to pitch ‘Dustin,’ I knew anything he came up with would be a sure thing, so I leapt at the chance,” Parker said. “A daily strip is an enormous undertaking because you’re always having to feed the beast. Teaming up lets us play to each other’s strengths and spreads the workload. Steve is deeply funny, and while a great cartoon artist in his own right, he felt more comfortable writing the gags and having me draw it.”

They pitched “Dustin” to various syndicates and it was soon picked up by King Features. After that, the pair got busy. Now, a decade later, they have perfected their production methods.

Kelley writes the strip in what he calls a “sit-comic” format, a word he and Parker coined to describe their creation process, one that they model after TV sitcoms.

Kelley’s characters aren’t one-note. They are deeply thought-out and well-defined. This method of writing creates “little situations of conflict that throw off humor,” according to Kelley.

“I send Jeff a week’s worth of written scripts. If you looked at them, they would look like the scripts for a TV show,” Kelley said. “I write stage directions, list the character’s name, as well as who is in each block and the dialogue. Then Jeff interprets that.”

“I’m kind of an old school big nose/big feet cartoonist who likes over-the-top visual gags,” Parker said. “When we first started, Steve sometimes had to pull me back here and there when I got too broad with a facial expression or a reaction to the punch line. His humor is smart, low-key and subtle, sort of conversational too. I quickly learned to appreciate his style and now it’s become second nature for me to work in ‘Dustin’s’ more realistic setting.”

Parker tries to get three strips “penciled” in a day, which he estimates takes around 10-12 hours. He admits that he often spends more time than he should worrying about layout and composition, which tends to add time on to his work. And the actual time depends on how many characters are in a scene.

“I curse Steve’s name to the heavens whenever I get a script reading, ‘Dustin and Ed are seated at a crowded baseball stadium,’” Parker said.

Additionally, a Sunday strip will take Parker a solid two days to “pencil” and “ink,” words he admits are a bit misleading since all of the work has been done digitally since at least 2015.

Ten years ago, it was hard for either of them to imagine the success that “Dustin” would achieve. Today, the strip is featured in about 370 newspapers across the country and is even translated for a few international papers. But Kelley believes “Dustin” has a kind of universality that attracts a variety of readers.

“I can’t tell you how many people have said to me, ‘You know, I’ve got a Dustin living in my house,’” Kelley said.