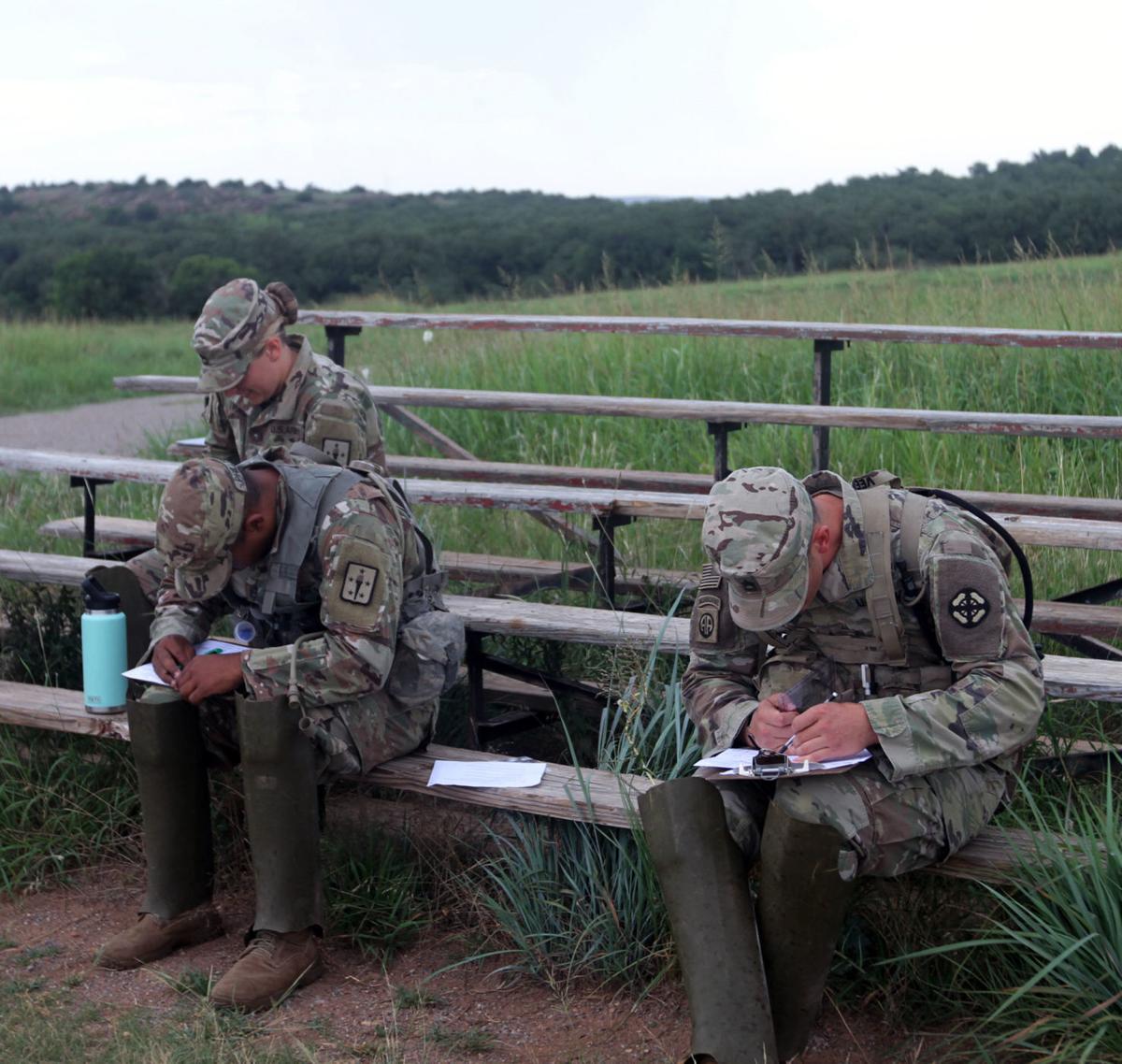 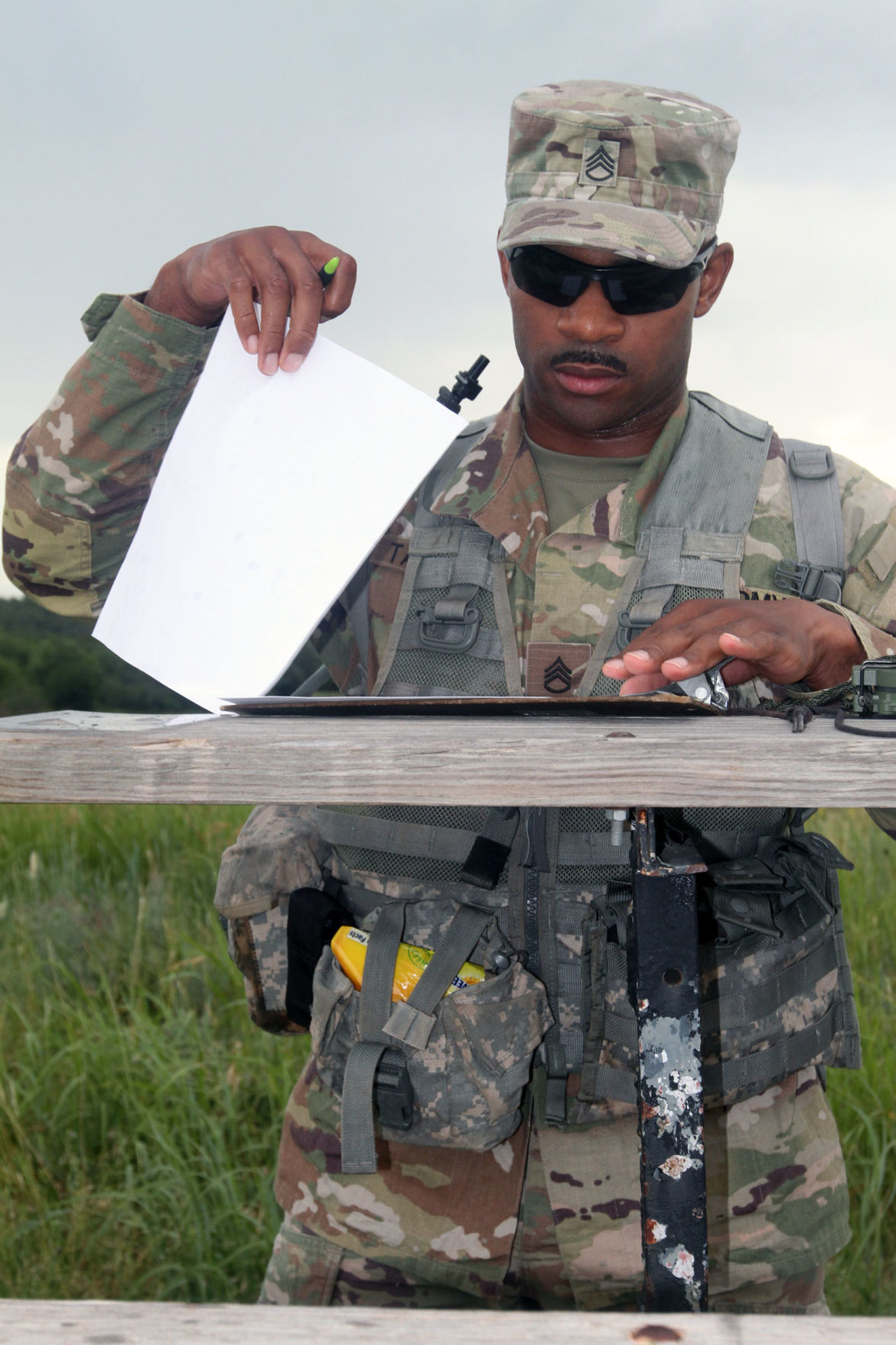 Staff Sgt. William Tazwell of B Battery, 1st Battalion, 40th Field Artillery lifts a sheet of paper as he uses his protractor to help him plot points on a map for the land navigation portion of Fort Sill’s 2020 Drill Sergeant of the Year competition.

Staff Sgt. William Tazwell of B Battery, 1st Battalion, 40th Field Artillery lifts a sheet of paper as he uses his protractor to help him plot points on a map for the land navigation portion of Fort Sill’s 2020 Drill Sergeant of the Year competition.

Nature provided a welcome respite from the sizzling heat for the start of Fort Sill’s 2020 Drill Sergeant of the Year competition on Tuesday.

This year there are only four entrants. Each of the Fires Center of Excellence’s three training brigades is allowed to enter two drill sergeants, and 30th Air Defense Artillery Brigade had to bow out due to last-minute injuries and emergencies.

They industriously pored over their maps on a site east of Rabbit Hill in preparation for the day land navigation portion of the competition. Dark clouds overhead not only kept the sun off but spat down tiny droplets of moisture.

“This is definitely one of the big competitions,” Morgan said. “Right now they’re going to plot their points, and they have four hours to find eight points.”

The entrants use a protractor and a compass to plot points on their maps. No hand-held GPS devices or other electronic aids are permitted.

The land nav course covers two square kilometers, from Apache Gate on the east up to the north boundary of Fort Sill and west to Rabbit Hill. Morgan said the competition would go forward even if it started raining.

To verify they actually found the predetermined points, the drill sergeants had to locate a board with a number on it and write that number down. When they return to their point of origin, Morgan will check the score sheet to make sure that grid matched up with that number.

The four vying for the honor of being Fort Sill’s top drill sergeant checked in Monday and began the contest at 5 a.m. Tuesday by demonstrating their proficiency on the Army Combat Fitness Test. Competition continues today with a 12-mile ruck march followed by M-4 qualification at the T-2 weapons range. The contest will conclude Thursday with board examinations that are partly virtual, partly live.

Fresh from winning the NCO side of Fort Sill’s Best Warrior Competition two weeks ago, the 2019 Drill Sergeant of the Year was seated on the tailgate of a truck, presiding over the competition that would decide his replacement.

“I’m just coordinating,” Sgt. 1st Class Benhur Rodriguez said. “I didn’t put it together. It was a collaborative effort between all of the brigades. They are tasked with each individual event. They put everything together, and I just ensure it all ties together at the end.”

Rodriguez said he doesn’t take part in scoring the competition because that would be a conflict of interest. As the 2019 DSoY he works for Headquarters, 434th FA Brigade, and that brigade has two drill sergeants in the competition.

The unit running each event does the scoring, and its personnel give Rodriguez the sheet with the name of the individual in charge and the final tally.

While the competition is in progress, Rodriguez’s job is to stand by and make sure there are no injuries or emergencies.

“You can see the terrain out here. It’s pretty rough, and not just the terrain itself, but there’s a lot of wildlife out there. So we’ve just got to make sure we’re ready to go and help them out if there’s any need for it,” Rodriguez said.

An Army ambulance stood by in case it was needed.

“We got blessed with pretty nice weather, with the expectation for it to be 107. So it’s nice right now,” he said.

Rodriguez said his year as DSoY has been fun.

“It’s been a whole new learning experience. I think I’ve matured a lot more as a leader, as far as understanding how things work from a much, much higher level than what I was used to – conversing with full-bird colonels and every now and then interacting with the general or the post-level sergeant major. All this interaction was something that I would never have thought possible. As a staff sergeant in an infantry unit, I would hardly ever get to talk to a battalion sergeant major, much less a brigade sergeant major. So it’s been great.”

He said he’s not sad to give it up, because it opens up the same opportunity he got for somebody else to step in and improve on everything he did.

“It also allows me to move on to something new and to learn something new. So, not sad. I don’t think so,” Rodriguez mused.