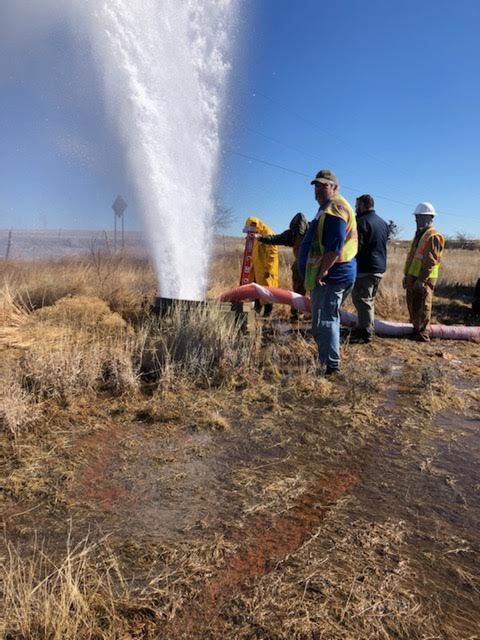 Water spews into the air Monday, the result of an air relief valve on a waterline that froze, then broke. The damage was seen on multiple lines, the result of frigid temperatures from last week’s winter storm, and is contributing to water pressure and water loss problems across Lawton, city officials said. 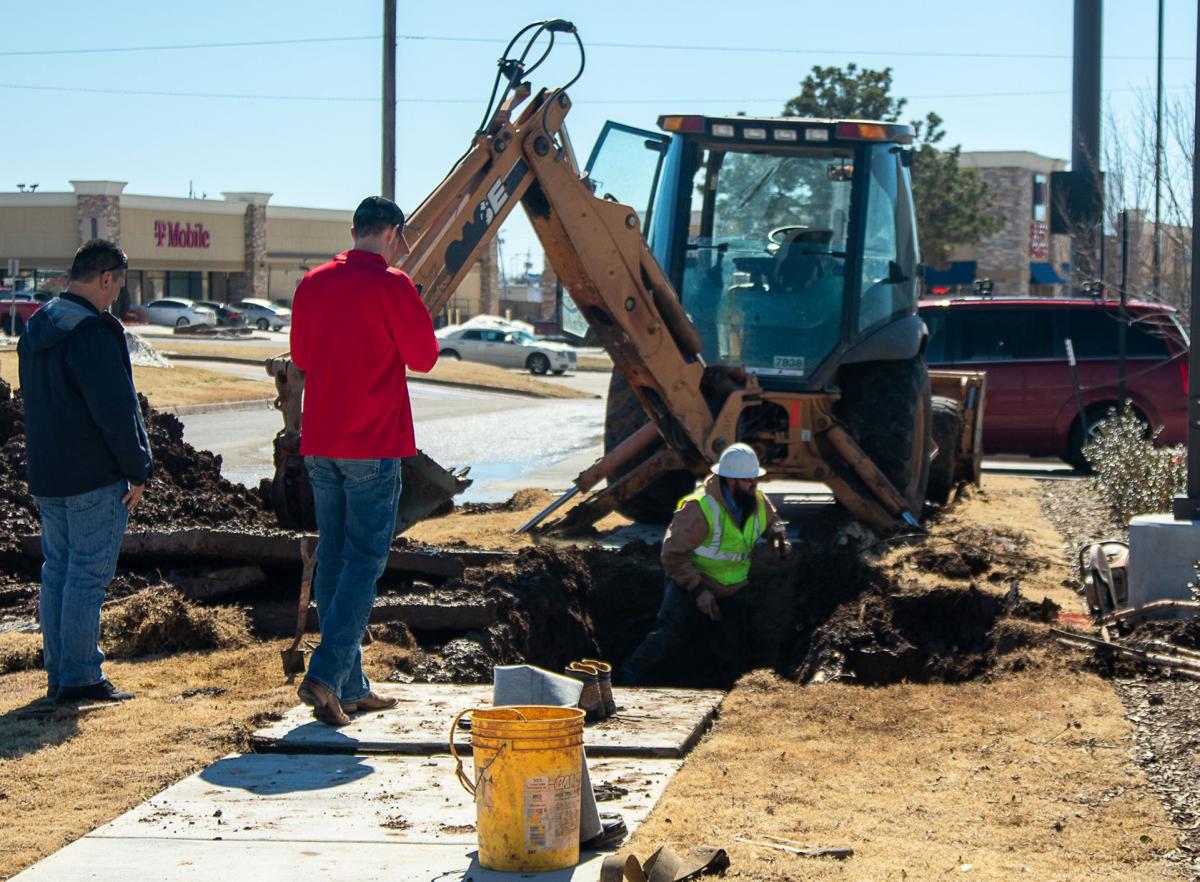 City workers repair a broken waterline near the intersection of Northwest 23rd and Cache Road Monday. The line was one of multiple ones across the city causing problems in the aftermath of last week’s winter storm.

Water spews into the air Monday, the result of an air relief valve on a waterline that froze, then broke. The damage was seen on multiple lines, the result of frigid temperatures from last week’s winter storm, and is contributing to water pressure and water loss problems across Lawton, city officials said.

City workers repair a broken waterline near the intersection of Northwest 23rd and Cache Road Monday. The line was one of multiple ones across the city causing problems in the aftermath of last week’s winter storm.

Lawton and its water customers use an average of 14 million gallons of water a day in the winter months.

The usage figure was 31 million gallons a day (MGD) Monday morning. That illustrates the magnitude of the struggle City of Lawton utility crews are facing in the wake of a winter storm that brought frigid temperatures for a length of time most residents have never seen before, said Lawton Utility Services Director Rusty Whisenhunt. The problem boils down to simple math.

“Fifteen million gallons is flowing somewhere,” Whisenhunt said of the difference in what residents normally use and what the system is producing. “There’s still a lot of water leaks.”

The issue is largely responsible for the low water pressure and outages across Lawton. So, a city structure that spent three-quarters of last week focused on streets shifted by week’s end to water, as crews from a combination of city divisions track down broken lines, damaged air relief valves (devices that bleed off air in water lines/mains), frozen water meters and any other issue affecting water.

Consider the numbers. In addition to a water treatment total more than double normal usage (31 MGD is a summer demand figure), city crews had identified and shut off more than 500 water meters by late Monday morning because of problems with private service lines that run from the meter to the structure.

Whisenhunt said it is important to identify all leaks and shut them down for repairs for a multitude of reasons. For residents, that excessive demand for water is the reason many experienced low pressure or no water at all. Whisenhunt said high demand on the system drained the city’s elevated water towers and ground storage tank in north, east and west Lawton, which compounded the water pressure problem (the structures are designed to mitigate the demand on the system). With problems identified, those structures have been filled again and it has helped. For example, Lawton’s west industrial park, fed by the red and white “Goodyear” tower, was able to go back on line at 5 a.m. Monday.

It wasn’t a lack of preparation that caught city officials unaware. Whisenhunt, who has worked for the City of Lawton off and on for decades, said what made the issue so severe was the extended length of time frigid temperatures persisted.

“We expected some issues with the weather, but not that cold for that long of time,” he said.

City crews expected broken waterlines and while that happened, it could have been worse. The largest broken main Lawton crews had dealt with by Monday morning was a 10-inch main in west Lawton to Pecan Valley, but that line also is a high-pressure one, which meant it released a lot of water when it broke. A bigger problem was something that doesn’t usually occur: air relief valves on lines and mains that froze then broke. An air relief valve was the problem on a transmission main that crosses Fort Sill before entering Lawton on its north side at Rogers Lane, but it wasn’t the only location.

Whisenhunt said those air relief valves caused problems in East Lawton neighborhoods and were the culprits for a waterline break inside the banquet room at Lawton City Hall and the Patriot Theater.

Solving the issue involved hours of work for city crews and for the water associations that draw their water from Lawton. Those entities also had broken lines and, like Lawton, had to trace down problems. For Lawton and rural water associations, that means literally walking their lines, sometimes “in the middle of nowhere” to look for pools of water that identify a problem.

“We walked miles and miles of lines,” Whisenhunt said, explaining, for example, that the transmission lines running across Fort Sill between the Medicine Park Water Treatment Plant and Lawton’s northern edge can’t be driven, so crews had to walk them for visual inspections.

It’s part of the reason utility crews are working around the clock; Sunday was “a 23-hour day,” Whisenhunt said. It’s also the reason city officials are asking residents to look for the same indicators and report locations. Now that the snow has melted and evaporated, large standing pools or running water are suspect, he said, adding the goal is to shut down all leaks, bringing usage numbers back into line with their 14 MGD winter average.

Is Lawton having similar problems with sewer lines? Not so much, Whisenhunt said, explaining city sewer lines are buried deeper in the ground, meaning they have more protection from frigid temperatures.

But, all infrastructure is subject to problems from shifting clay soil, city administrators say of a soil type with so much plasticity the ground can shift inches at a time.

City officials, acknowledging the extreme conditions residents are facing, are asking for understanding for their work crews.