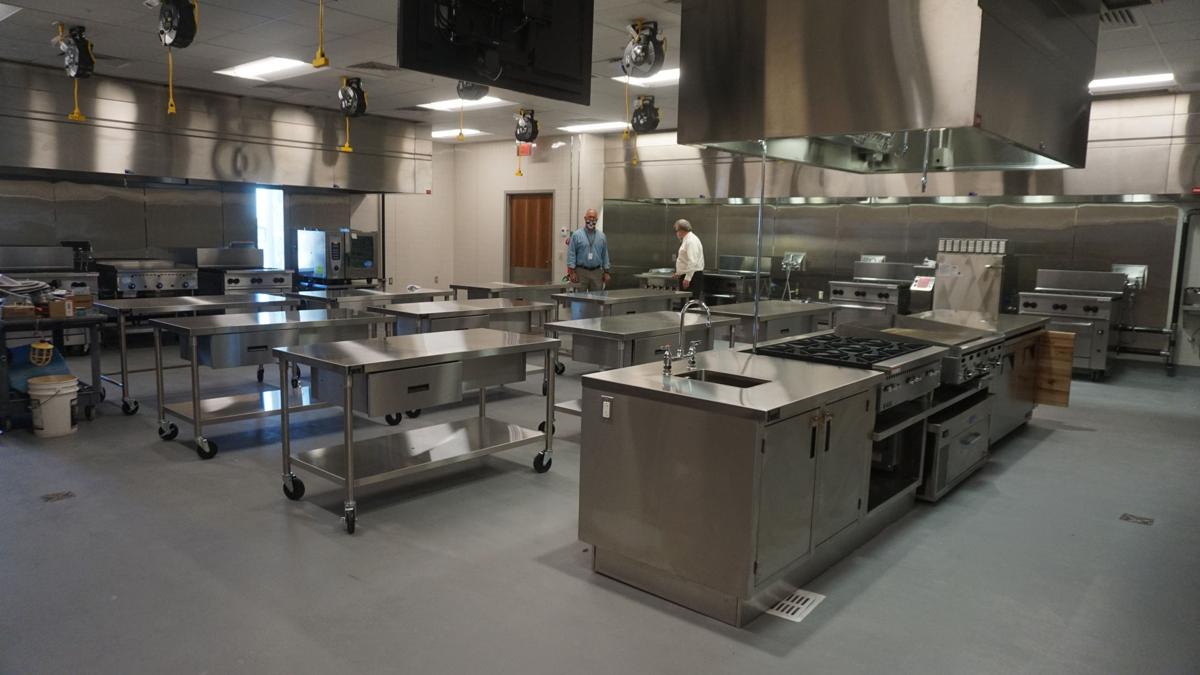 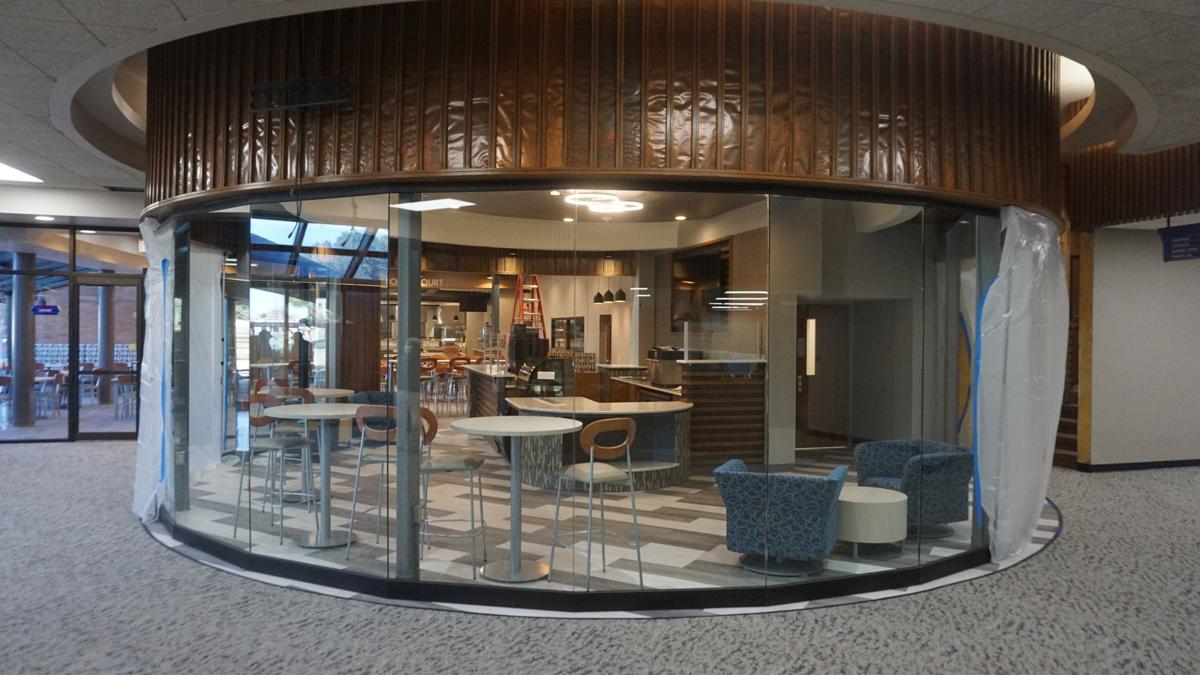 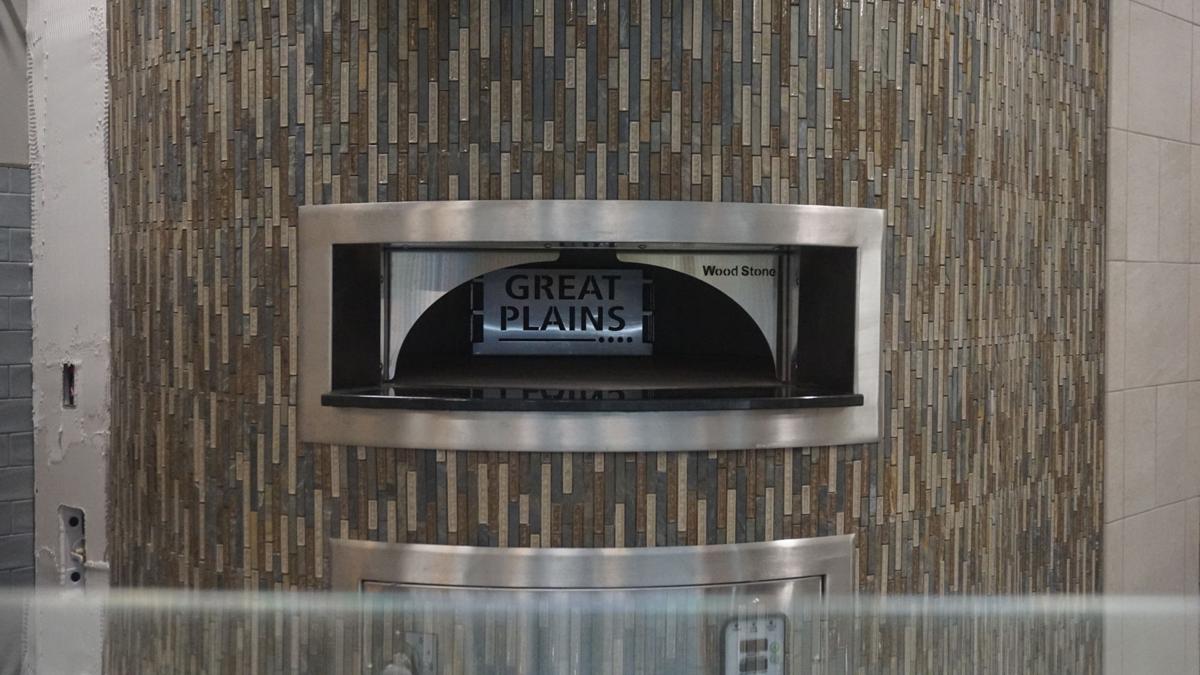 The Great Plains logo is visible in the pizza oven, one of the last remaining areas to be finished in the new culinary arts complex at Great Plains Technology Center. Campus officials said he complex is nearing completion, and they expect to be serving food and training students there by early December. 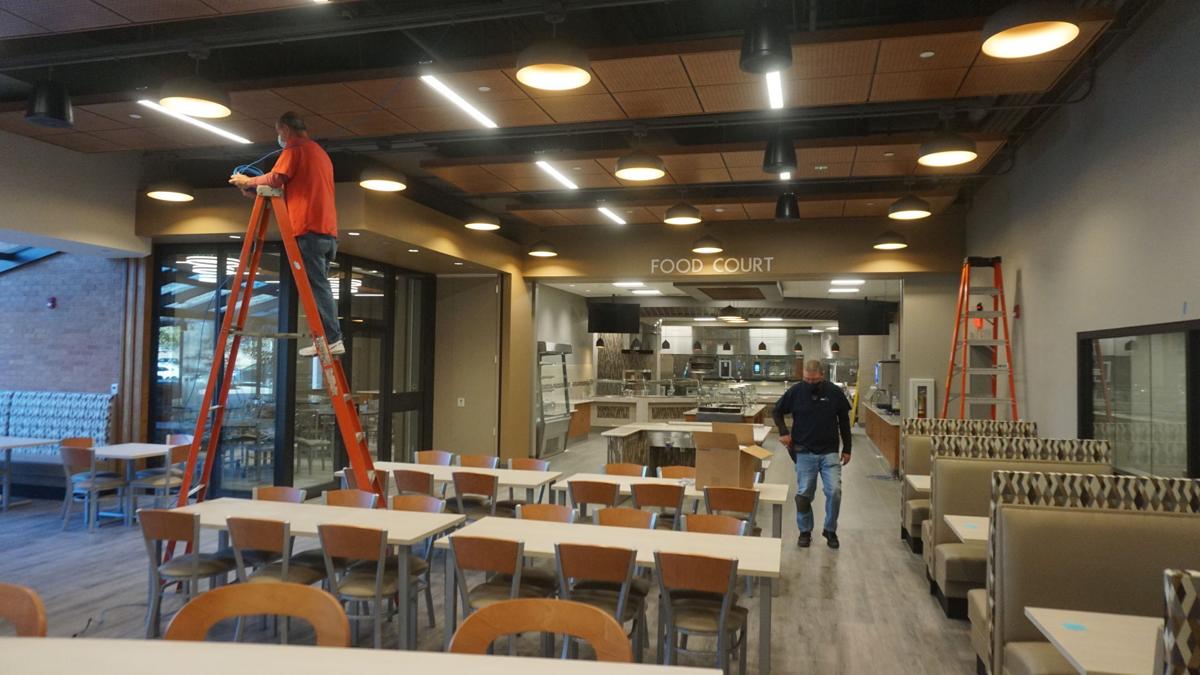 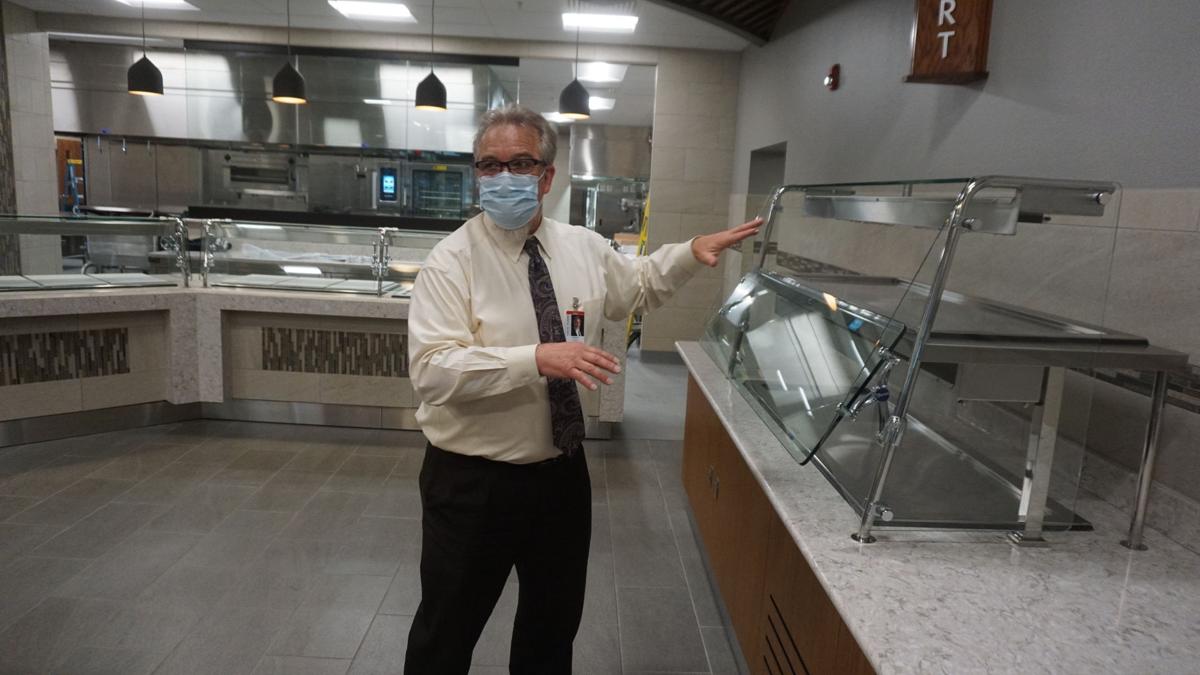 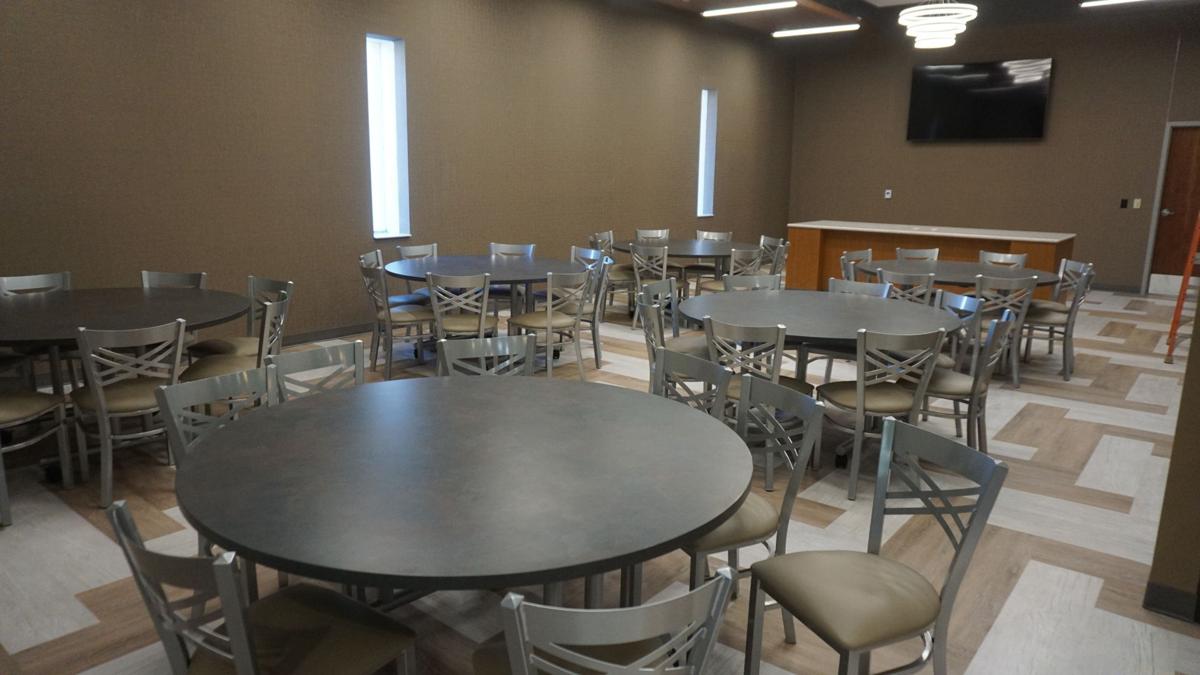 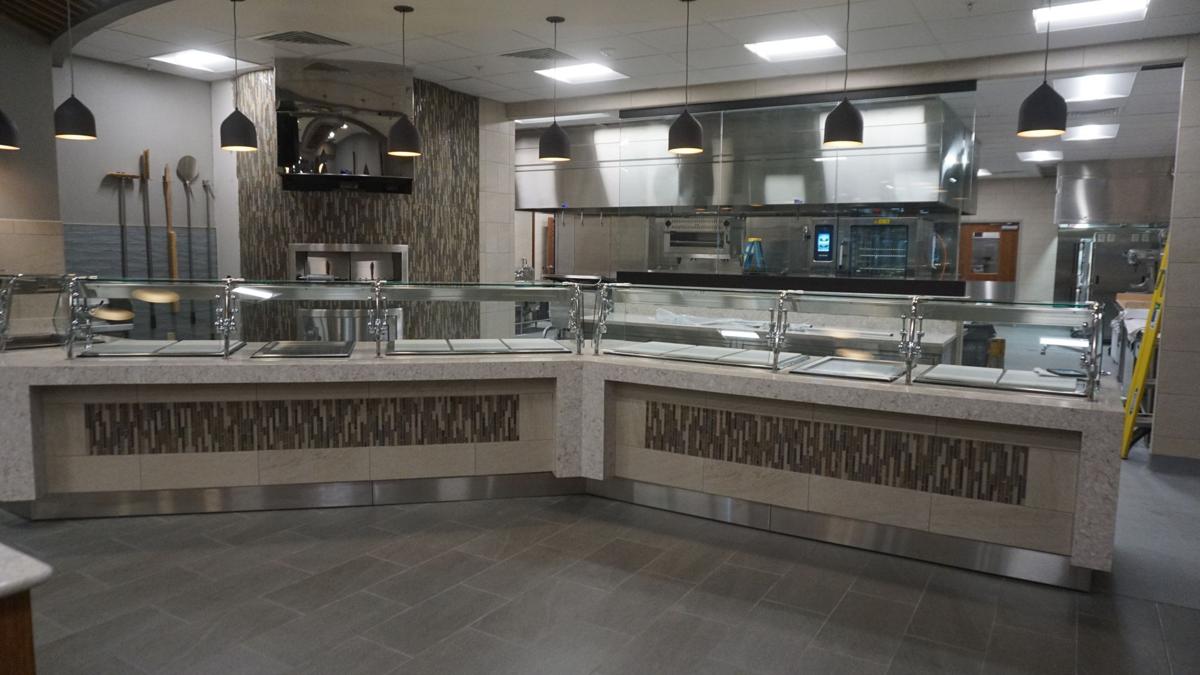 The Great Plains logo is visible in the pizza oven, one of the last remaining areas to be finished in the new culinary arts complex at Great Plains Technology Center. Campus officials said he complex is nearing completion, and they expect to be serving food and training students there by early December.

The plastic curtains are coming down at Great Plains Technology Center, and employees and students like what is being revealed.

It’s been three years from conception to reality for the new culinary arts complex in the main building’s east wing, and after 11 months of construction, contractors on the $3.735 million renovation project are so close to completion that students and staff should begin moving equipment and supplies into the complex this week. The completion date is about three months beyond what was initially projected, but Superintendent Clarence Fortney said Great Plains has been able to work around the delay — mostly related to COVID-19 — and officials are pleased with the product that BYSP designed and Ryan Herring Construction built.

The new complex is a perfect blend of old and new, Fortney said, explaining he is pleased the contractor recognized the originality of Building 100’s design and kept many of those touches, to include using reclaimed wood from the original building.

“They took the old and made it new,” he said, pointing to the wooden touches in the front area made from the reclaimed wood.

The project converted 14,000-square feet of space in the east wing into classrooms, modern storage, serving and dining areas, and commercial and teaching kitchens. It’s the first substantial change ever made to the culinary arts area, home to a popular Great Plains instructional program. The last upgrade of any kind took place about 20 years ago, when doors were remodeled.

“The teaching kitchen,” he said, explaining an actual kitchen in the classroom — not just pieces of equipment — gives instructors a distinct advantage when teaching students the basics before moving them to a production kitchen.

It also puts Great Plains into a special category.

“Not everyone has one,” Cauthon said, adding he can think of only one other technology center in Oklahoma that has something as advanced as Great Plains has.

Along with modern equipment comes the distinct advantage of space. Cauthon said students in the old complex had to crowd around instructors in the production kitchen when any kind of teaching took place. The new classroom has working kitchen equipment, along with work stations and ceiling plugs for appliances, while the new commercial kitchen is much larger and modern touches.

“It’s so much better equipped,” Cauthon said, noting the advantages to students and staff. “We’re excited.”

Fortney said Great Plains “looked over a lot of kitchens” in Oklahoma and Texas before settling on the design they wanted, adding he’s excited for students to get in and start using the kitchens. Students are excited, too. Culinary arts students in this year’s program have spent up to 70 percent of their class time on theory when instructional time usually is evenly divided between theory and practice.

“They’re eager to set up,” Cauthon said, of the work to move all the parts of the program into its new home.

While the area is almost completed (Great Plains had its temporary certificate of occupancy on Thursday), contractors still are on site finishing up odds and ends as they wind down the project. For example, the pizza oven vent hood arrived only two weeks ago, so on Thursday morning workers were completing the wall around that oven. Cables were being installed, and contractors were handling other items, as visitors toured the complex.

That complex catches your eye as soon as you walk into the main building.

What had been a solid wall on the left side of the front lobby now is a glass wall, but retains the circular design that was part of the building’s original design. The space within that glassed area is an open air bistro that will serve coffee and grab-and-go foods. Another plus: the bistro will remain open for the campus’ night students, Fortney said, adding students also can get some training at being baristas.

The bistro opens into the dining area with its new serving lines, digital menu boards, heated and cooled holding areas, and open seating (Fortney said some of those seats will be removed and stored, to ensure social distancing). The commercial kitchen is clearly visible from the dining area because the dividing wall is glass, a nod to Great Plains’ intent to emphasize accessibility and teachability. A formal dining room is off the north side of public dining area, as is a small outdoor dining area with a built-in fireplace, where students and staff can sit during pleasant weather (the outdoor patio furniture already has arrived, Fortney said).

Fortney said moving will begin in earnest this week, and expects the facility to be operational and serving food by early December. Because of COVID-19, campus officials probably will do a series of “soft” openings for the facilities, rather than one major event.

While COVID-19 was a large part of the delay in the project, it did help in one respect.

For the second school year in a row, the culinary arts class has worked in the commercial kitchen of the campus’ business incubator, sharing space with business clients. The 2019-2020 class was kept smaller than normal to ensure they fit (no new students were accepted; that class was comprised of only second-year students) and student enrollment this year was limited by the pandemic. Fewer students meant an easier fit in the temporary kitchen.

“COVID has been a blessing,” Fortney said, wryly.