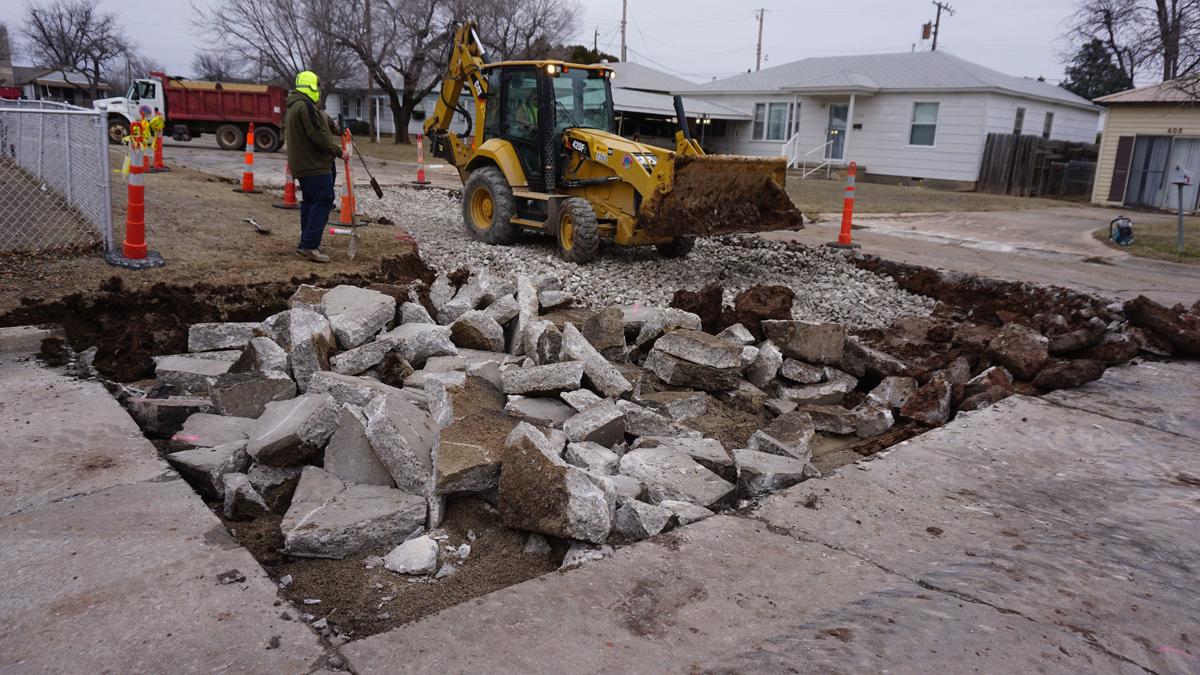 A Cit of Lawton streets crew breaks up pavement at Southwest 26th Place and Tulane on Thursday as they tackle a long-awaited repair project. City officials said increased funding, available through the proposed 2020 Capital Improvements Program, would allow even more streets work to be done. 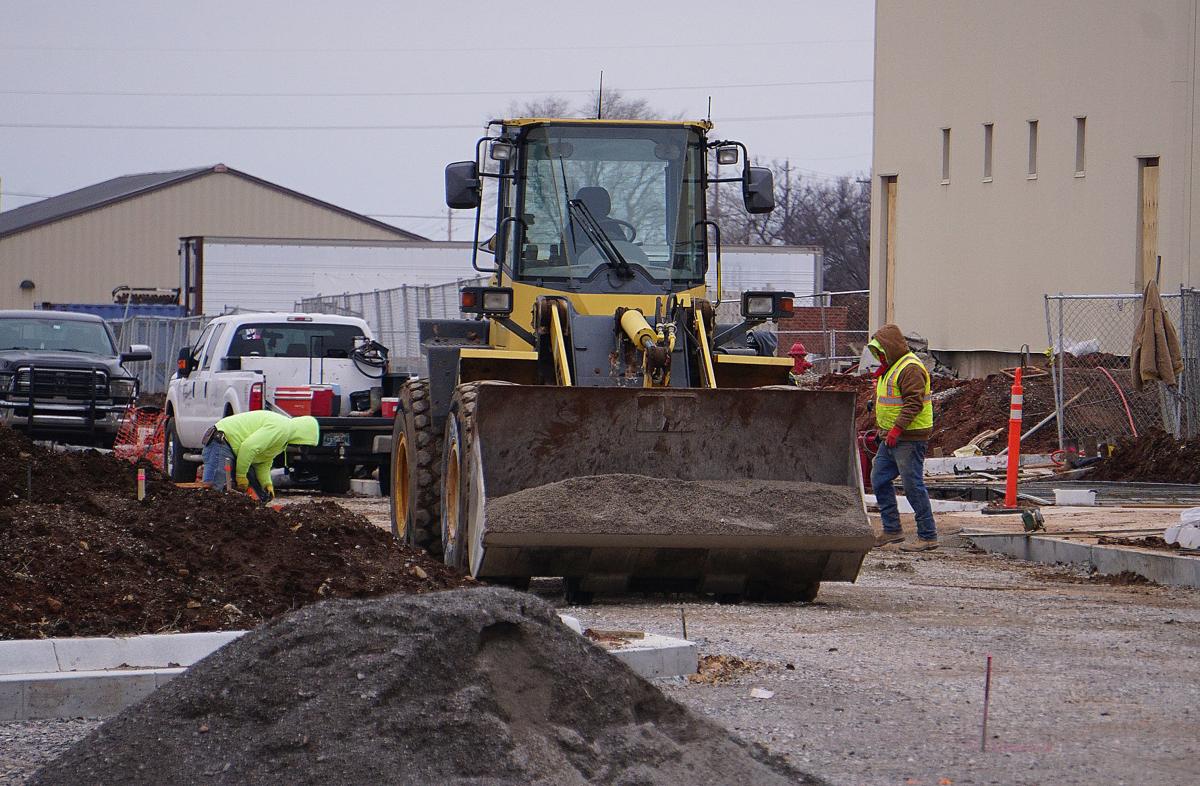 A Cit of Lawton streets crew breaks up pavement at Southwest 26th Place and Tulane on Thursday as they tackle a long-awaited repair project. City officials said increased funding, available through the proposed 2020 Capital Improvements Program, would allow even more streets work to be done.

Thank good old Southwest Oklahoma clay soil for some of the most prominent projects in the 2020 Capital Improvements Program.

That sales tax proposal, to be presented to Lawton voters Feb. 11, would replace the 2015 Sales Tax Extension and the 2016 Capital Improvements Program (CIP) with a new program that would extend the existing 2.125 percent sales tax through 2034.

Funding generated by that extension would fund a new set of projects, including $18 million worth of work on arterials and $5 million to build new sidewalks and repair existing sidewalks along city arterials.

Not that streets have been neglected: every CIP in recent memory has set funding for streets and arterials, and voters also agreed to create an ad valorem program specially dedicated to street work. And, the city has at two dedicated funding sources for sidewalks: $1 million in the 2015 Sales Tax Extension for issues keyed toward the Americans With Disabilities Act, and revenue generated by the sales of medical marijuana products. And, the city’s operating fund contains funding for both types of work.

But, city officials said updates/additions to almost 900 miles of paved streets, along with sidewalks, is a never-ending battle.

“You can’t put enough money in the operating budget,” Deputy City Manager Bart Hadley said, of the funding needed to make a difference.

Hadley and City Manager Michael Cleghorn said the annual operating budget is intended to address maintenance. They said a CIP is needed for replacement because it is a more significant cost. And, tackling the issues of streets, sidewalks, waterlines and sewer lines to the degree there are no more problems is too big even for a CIP. Public Utilities Director Rusty Whisenhunt estimated the city would need $500 million in each category to fully resolve water/sewer and street problems.

While funding issues are partly responsible, clay soil is the number one culprit. Not only does that soil promote damage, it is the driver in replacement/building costs.

Cleghorn, who has a Public Works background in multiple cities in Texas, said residential streets in Texas can have a 1.5-inch asphalt overlay. The same streets in Lawton need three times that amount to withstand the stress of shifting clay soil, and more asphalt means higher costs.

City Engineer George Hennessee said the new CIP will contain arterial work already identified in the 2015 and 2016 programs, but the decision about when they will start is influenced by the Oklahoma Department of Transportation. That’s because ODOT has pledged money for construction, but hasn’t firmly set the Lawton projects on its master list.

A plan to expand West Gore Boulevard between Northwest 67th and Northwest 82nd streets (eliminating the arterial’s final two-lane stretch) is expected to proceed quickly; expanding the first mile of East Rogers Lane immediately east of Interstate 44, is on the back burner.

City staff members have their own ideas about priorities because they analyze streets to determine those in need. That doesn’t always mean the worst street gets the top spot. Other factors come into play, including facilities adjacent to that deteriorating street (emergency services or medical care facilities, for example).

Hennessee said it takes about two years to go from designs to construction, with a preparation period that includes designs, moving utility lines, and acquiring right of way (some property owners are reluctant or can’t agree on a cost). He said while Lawton streets are addressed under a long-term, strategic plan, the city might have to wait on right of way acquisition.

Public Works Director Larry Wolcott said while materials for repair and maintenance are contained within the streets division operating budget, what can be done each year goes back to weather, soil conditions and whether a street needs repair or replacement.

Cleghorn said cracks are the top factor in street damage because they allow water to enter. Once water penetrates concrete/asphalt, it can expand and contract, causing breaks. Sealing cracks allows streets “to live a little longer,” he said, explaining it diminishes the effects of water.

“The city gets a lot more mileage out of its streets,” Cleghorn said.

Hadley said city administrators have worked to increase the operating budget to address problems after years of budget cuts, and there has been a 30 percent increase in the materials category in the last two years. Cleghorn said an in-house change instituted this budget year — giving responsibility for concrete curb and driveway repairs to the utilities division — means the streets division has dedicated more staff to routine maintenance.

The 2020 CIP also is dedicating more dollars to something city officials already are trying to emphasize: sidewalks. While existing programs and policies are looking at new sidewalks, that doesn’t address areas without sidewalks or substandard sidewalks.

While part of the argument for sidewalks is accessibility for those with limited mobility, Cleghorn said they also play into a community’s overall appearance. Communities that emphasize walkability are more appealing.

“It draws people into the community,” Cleghorn said.