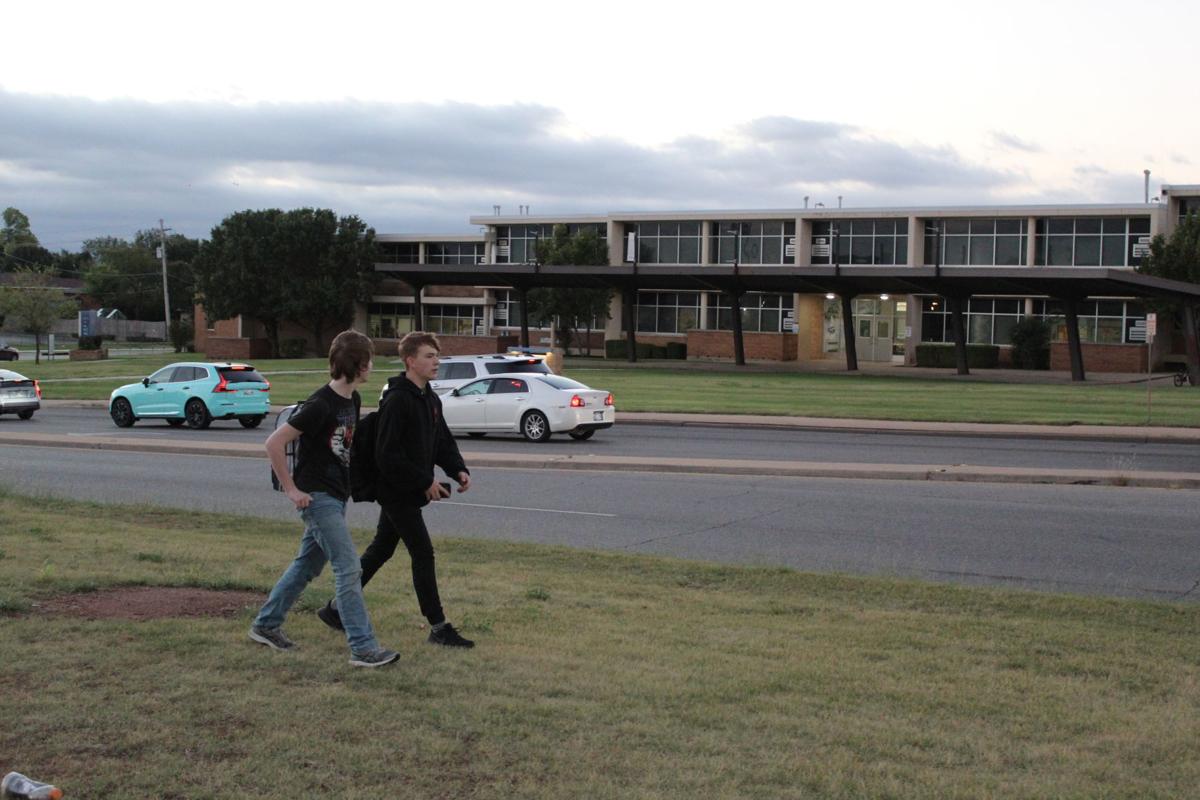 Two students walk along a well-worn path on the north side of West Gore Boulevard Friday, as they head for Eisenhower Middle School. 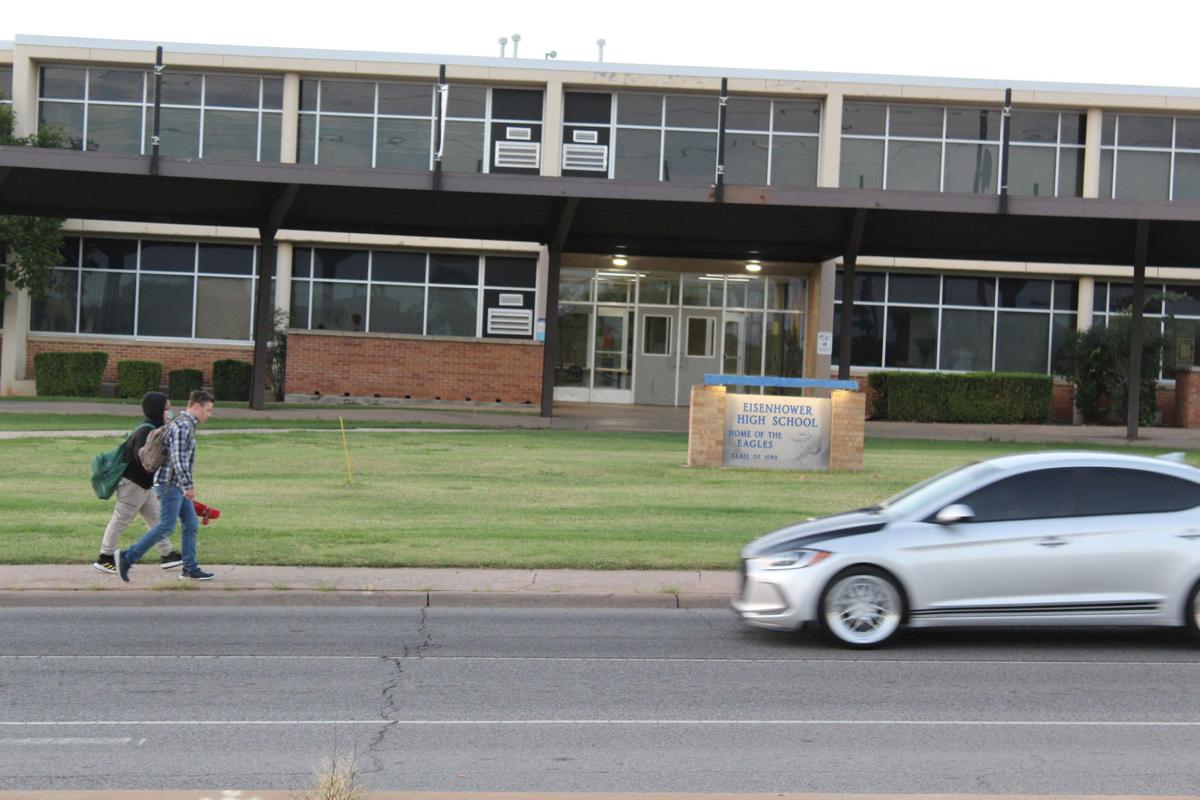 Students walk along an existing sidewalk Friday, as they head to Eisenhower Middle School. The City of Lawton has announced plans to launch a construction project that would make it easier for students to walk, building a new sidewalk to link into existing sidewalks along the south side of West Gore Boulevard, between Southwest 52nd and Southwest 38th streets.

Two students walk along a well-worn path on the north side of West Gore Boulevard Friday, as they head for Eisenhower Middle School.

Students walk along an existing sidewalk Friday, as they head to Eisenhower Middle School. The City of Lawton has announced plans to launch a construction project that would make it easier for students to walk, building a new sidewalk to link into existing sidewalks along the south side of West Gore Boulevard, between Southwest 52nd and Southwest 38th streets.

Mike Jones, ADA coordinator for the City of Lawton, said the strongest argument for sidewalks throughout a community really is that simple.

“They connect people,” he said. He and Deputy City Manager Richard Rogalski cited the merits of a concerted effort that allows the City of Lawton to bring more sidewalks to different parts of the community while repairing those that already exist.

“You obviously have a walking public,” Rogalski said, explaining a fact city staff members have always known: build a sidewalk and people immediately begin using it.

While city code has long contained provisions that require sidewalks as part of substantial or new building projects and infrastructure, projects are increasing because more funding is available to the city. The Capital Improvements Program has designated funds for sidewalks, including $1 million from an earlier CIP specifically for accessibility projects. Last year, the City Council said sales tax revenue generated by the sale of medical marijuana products (an estimated $40,000 a month) will be restricted to sidewalks. Sidewalk work and curb cuts for access ramps have become part of routine repairs funded by city divisions. Lawton also has federal transportation funding dedicated to projects near schools.

Council members expressed frustration earlier this summer about the pace of work on sidewalk projects. City staff members said things are changing as they move closer to launching projects along two arterials while also preparing to draft a sidewalk master plan.

Jones said the emphasis on sidewalks marks a fundamental shift in the attitude of city officials and society in general, which has become more attuned to inclusion projects benefitting residents with accessibility issues. The change is important for those with physical accessibility issues; there are 13,000 people in the community identified as disabled or having some accessibility problem.

Jones said the emphasis is a shoutout to the city’s past.

“There used to be sidewalks,” he said, explaining he remembers biking and walking on sidewalks in his neighborhood while growing up in MacArthur Park.

While the city’s oldest neighborhoods have some form of sidewalks and its newer ones have them because of city code requirements, there was an extended era where sidewalks were not required in residential areas.

“We built a lot without sidewalks,” Rogalski said, adding if you know what you are looking at, you still can see signs of sidewalks along streets but now buried under dirt and grass.

Code requirements for sidewalks in most instances means residents are beginning to see changes. Jones said it has become routine for city divisions to incorporate sidewalks and curb access ramps in their projects: when the water department repairs a valve on a corner, they will do a curb cut and concrete access ramp if one doesn’t exist. That’s something residents will see more of downtown, where the city is preparing to launch an accessibility plan focused on sidewalks and access ramps.

“I’m really excited about the downtown accessibility,” Jones said, of a project he knows will open up the area for more residents to enjoy things such as Open Streets in the fall and spring, and May’s Arts for All festival.

Those projects will be decided as needs arise, Jones said of a plan independent of the overall master plan, but still linked because both address accessibility for a broad range of residents.

It’s part of reason city officials are moving forward with plans to create a sidewalk master plan. That document will include a rating system for projects, making it a “living” plan subject to change, Jones said. He can already guess some priorities, such as LATS bus stops scattered throughout Lawton, walking paths near schools, and areas near services that people need and use frequently.

Rogalski said some projects will become apparent as officials analyze the community: trails worn into the grass and dirt along city streets indicate a path already heavily used.

“It’s low-hanging fruit,” he said of the effort to find priorities, adding his hope is for a day when city staff will have to really search for sites.

Some residents are making themselves part of the solution.

Rogalski said residents of the Crystal Hills subdivision in southwest Lawton want sidewalks in their neighborhood and city staff is preparing a presentation to outline options. Discussions will include an old-fashioned technique called an improvement district, which allows residents in a specific area to be assessed a tax to pay for project they want.

“It’s a potential way to get sidewalks where they want them,” Rogalski said.