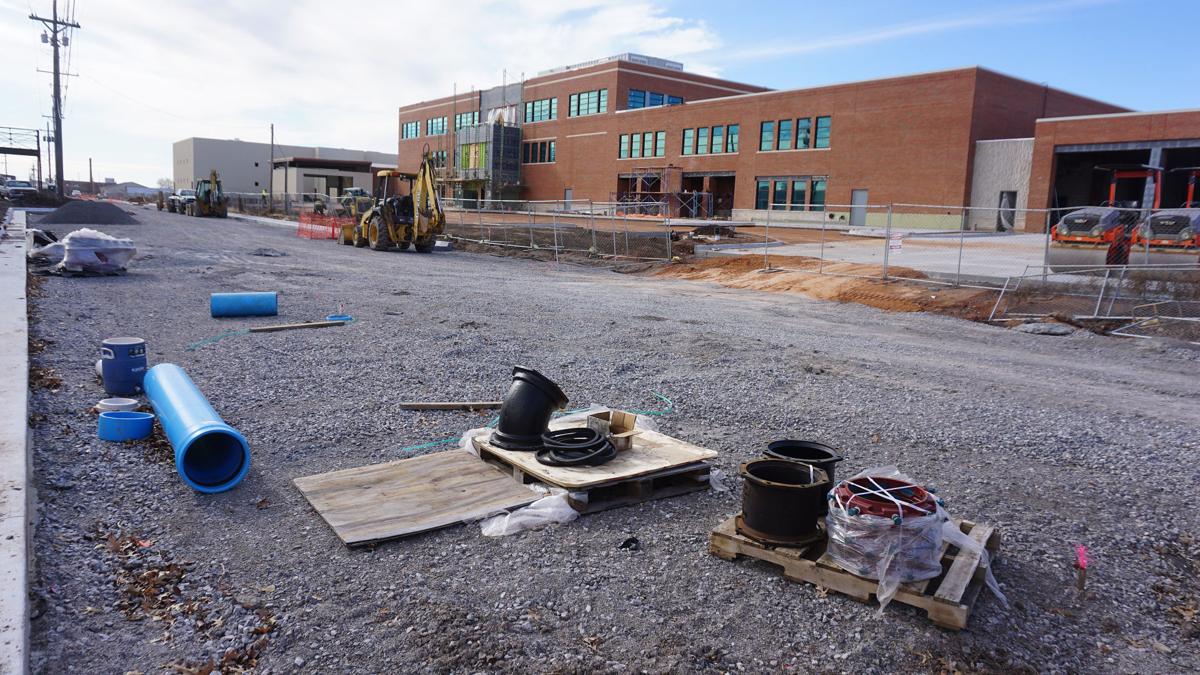 Street work continues west of the public safety facility under construction between Railroad Street and Larrance Street. The building, and updates to the street to serve it, is among the projects being funded through the 2015 Sales Tax Extension. 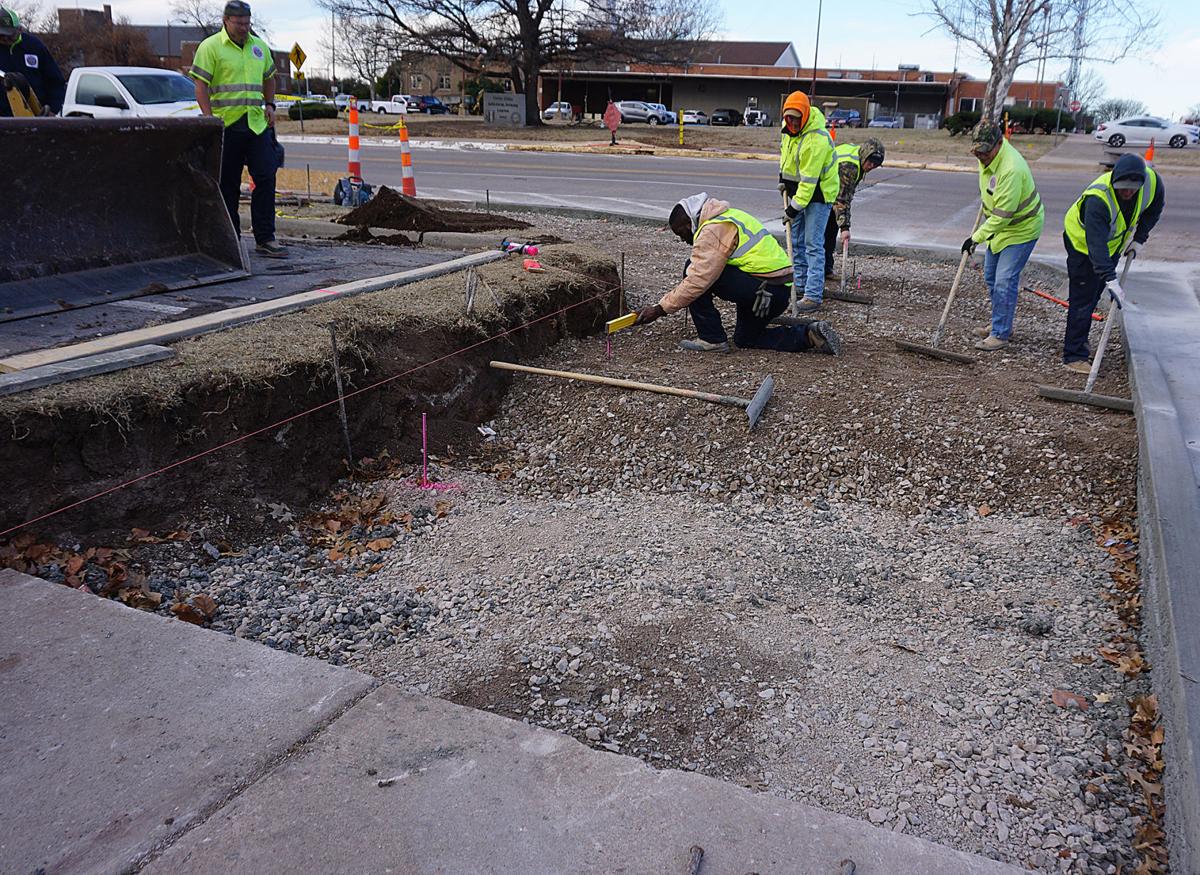 Employees with the City of Lawton streets division work Friday to install a new 10-foot by 40-foot handicapped walkway at Lawton Public Library. The ramp, which accompanies a new sidewalk installed in December, is similar to sidewalk projects that could be funded under the new Capital Improvements Program.

Street work continues west of the public safety facility under construction between Railroad Street and Larrance Street. The building, and updates to the street to serve it, is among the projects being funded through the 2015 Sales Tax Extension.

Employees with the City of Lawton streets division work Friday to install a new 10-foot by 40-foot handicapped walkway at Lawton Public Library. The ramp, which accompanies a new sidewalk installed in December, is similar to sidewalk projects that could be funded under the new Capital Improvements Program.

The proposal that will be put to a residential vote Feb. 11 is months in the making, dating to late July 2019 when the City Council began meeting publicly with community leaders, city staff members and others to hear discussions on projects that could be included in a new Capital Improvements Program (CIP).

Mayor Stan Booker, a vocal proponent, has said repeatedly the new program won’t increase the sales tax now charged on goods and services purchased in Lawton. Rather, the program gets its energy from the fact that the “new” component won’t end until Dec. 31, 2034. The two programs the 2020 CIP will replace — the 2015 Sales Tax Extension and the 2016 CIP — will expire Dec. 31, 2025, according to the ballot propositions that voters approved when they created them.

Approving the new CIP will end the two existing CIPs on March 31 and launch the new CIP April 1. The 9 percent total sales tax paid by those who buy goods and services in Lawton won’t change; the 2.125 percent that represents the combined value of the 2015 and 2016 CIPs will continue for nine more years.

“It is important to note that PROPEL (the 2020 CIP) does not raise the sales tax, but would extend the current rate from 2025 to 2034,” said City Manager Michael Cleghorn.

The ballot proposition residents will consider Feb. 11 also specifies the ordinance governing the 2020 program “does not increase City of Lawton sales tax,” but authorizes a levy of 2.125 percent in place of the existing taxes associated with the 2015 and 2016 programs (0.875 percent and 1.25 percent).

The ordinance that the council set into place for the 2020 CIP specifies completion of projects/expenditures from the 2015 and 2016 programs, listing the six project categories in the 2015 program and five in the 2016. Booker and Cleghorn said that means projects that are still in progress or not yet started will be carried into the new program.

City leaders say there is a simple argument for the new CIP.

“It all comes back to growth,” said Deputy City Manager Bart Hadley, explaining the new program focuses on projects that enhance the community and encourage growth, from infrastructure upgrades to beautification (he said statistics prove the link between aesthetics and growth).

Booker said the entire program is tied to economic development — and that is tied to population growth. He said it is simple economic reality: federal census officials say Lawton’s population has declined 4 percent, while other sources say the figure is closer to 8 percent.

“That causes problems throughout the city,” Booker said, explaining the city has had to face the challenges presented by that population loss.

For example, fewer people in Lawton means more houses on the market, meaning those houses are worth less (and generate less taxes) because demand has dropped. A house is the No. 1 asset most people possess, Booker said, of the financial problems that may result when “your No. 1 asset” drops in value.

Booker said there also is a practical side for the city. City government has new needs it must address, but those problems will have to wait until the next CIP.

That can change through a plan to revise the CIP, allowing the city to address new and future problems, Booker said. He also said the CIP itself will prompt community growth: its new projects include $29 million for economic development, something that will bring new people and new wages to the community.

City leaders said the program also has built-in protections, such as the fact the City Council remains part of the equation.

“By law, it (a project proposed for CIP funding) has to go to the council,” Cleghorn said.

Hadley said the ballot proposition that sets the tax and references the ordinance which controls the program also protects residents, explaining nothing will be removed without going back to a vote of the citizens.

“City staff can’t make a unilateral decision to remove something,” Hadley said, adding there is recent precedence: the city went to the voters with a proposal to end the 2012 CIP early and incorporate its projects into what became known as the 2016 CIP.

Voters approved that idea, as well as a plan that allowed the city to repurpose $17 million allocated for alternate water projects in the 2016 CIP, replacing that category with categories for citywide IT upgrades and infrastructure to support industrial development. Such adjustments allow the city to respond to needs, Hadley said.

Cleghorn said that is why the CIP was crafted the way it was, with categories rather than specific projects.

“It allows us that flexibility,” Cleghorn said, noting flexibility is important in areas such as water, sewer and street repairs.

Election board clears up inaccurate information about CIP election

LAWTON, OK — City of Lawton residents who already are registered to vote don't have to make special arrangements to cast ballots in the Feb. 11 Capital Improvements Program election.

New CIP would make one-half percent of its revenue "indefinite"

LAWTON, OK — The 2020 CIP would make part of its sales tax component "indefinite."