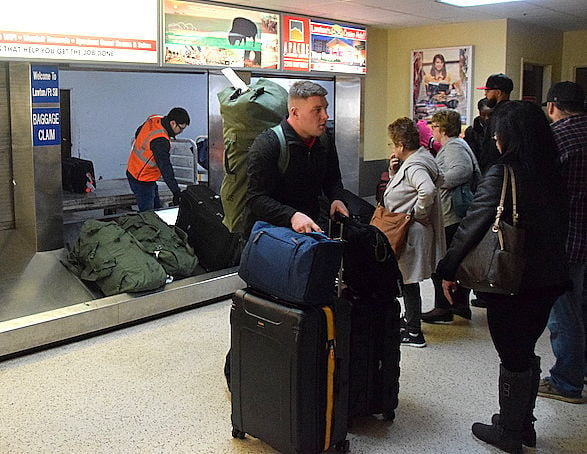 One passenger wheels his luggage away, while fellow flyers cluster around the ramps waiting for their luggage after their flight landed at Lawton-Fort Sill Regional Airport. A terminal modernization project, slated to start after the Christmas holidays, will replace what is now used with a baggage carousel system common at other airports. 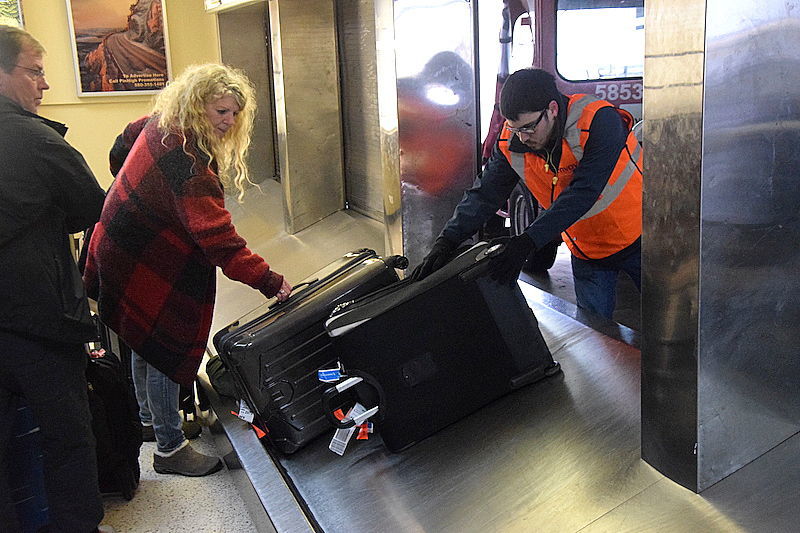 A baggage handler at Lawton-Fort Sill Regional Airport works in the cold rain Friday to lift luggage onto indoor ramps for pickup by passengers.

One passenger wheels his luggage away, while fellow flyers cluster around the ramps waiting for their luggage after their flight landed at Lawton-Fort Sill Regional Airport. A terminal modernization project, slated to start after the Christmas holidays, will replace what is now used with a baggage carousel system common at other airports.

A baggage handler at Lawton-Fort Sill Regional Airport works in the cold rain Friday to lift luggage onto indoor ramps for pickup by passengers.

Federal officials have released supplemental funding targeted for Lawton-Fort Sill Regional Airport, meaning work will be gearing up for the next phase of the terminal expansion.

Airport Director Barbara McNally said her office was notified by Fourth District Congressman Tom Cole that the funding had been released, after weeks of delay. Those funds are the final part of the financial equation needed by the airport to launch construction that will give the terminal a carousel-style baggage claim area, a modernized general public area and a temporary secured passenger holding room for passengers who have been through TSA screening but haven’t yet boarded their aircraft.

“That’s the money we were waiting on,” McNally said, adding that the airport also has signed a contract with Jet Commercial Construction of Norman, the winning bidder on a $3.8 million project awarded in August.

Construction is slated to begin in January, after the holiday traffic has died down, McNally said.

Because a large part of the project will be focused on the baggage claim area, McNally said the south end of the terminal will be closed to passengers to keep them out of what will be an active construction area. Arrangements have been made for another baggage claim site for the duration of construction.

“We will use the old Delta counter,” McNally said, of an area on the north side of the terminal, near the American Eagle ticket counter and a site that still has a conveyor belt to help move baggage.

Once the project is completed, passengers will have access to the same carousel system used in most other airports, rather than a chute system now in place. The work is the next phase in what is projected to be about $15 million in upgrades that will change the look and function of the terminal’s interior.

This phase is being funded through a combination of federal and state grants, including $1.373 million and $3.33 million from the Federal Aviation Administration (FAA), representing Aviation Improvement Program (AIP) funding. The allocations include Lawton’s annual entitlement (the $1.373 million) and supplemental discretionary funding ($3.33 million). AIP funding comes from charges on the tickets of passengers who board flights in Lawton.

In addition, the airport authority approved a plan to issue a $15 million revenue note, the same funding mechanism Will Rogers International Airport used to finance its renovations. The plan allows Lawton to draw up to $15 million to use on the terminal renovations, but McNally and members of the airport’s governing board have said funds will be drawn from the revenue note only after other sources have been used.

With sufficient funding in place for the first phase of a three-phase terminal upgrade, airport officials said the revenue note will be reserved for future work.

This phase will focus on the south end of the terminal, replacing what now is a series of garage doors that baggage handlers raise to place checked bags on small inside ramps. McNally said the system isn’t efficient because passengers must cluster in the same small area to wait for and retrieve their checked bags. Those doors also open directly to the outside, meaning they aren’t energy efficient.

The new system will be a flat conveyor system that can be loaded on the outside from a covered baggage cart area, then opened inside for passenger retrieval.

This construction phase also will built out the back end of the terminal, to provide new space for a temporary secured passenger holding area. Passengers who have been through TSA screening will use that site until a permanent facility replaces what is now the secured holding area (the temporary site then will be converted to other use).

The third part of this first phase will modernize the main part of the terminal where non-passengers and others wait. Airport officials said the most notable portion of that work focuses on the support pillars: every other pillar will be removed and the contractor will reinforce the roof. The net effect will be more open space, McNally said.

Work in future phases includes the new secured passenger holding area; separate corridors for passengers who are loading to and getting off aircraft; a larger TSA screening area; and a covered bridge linking the holding area to aircraft. Also planned is renovation of the carrier, ticketing and tenant areas; and renovations to the front of the terminal.