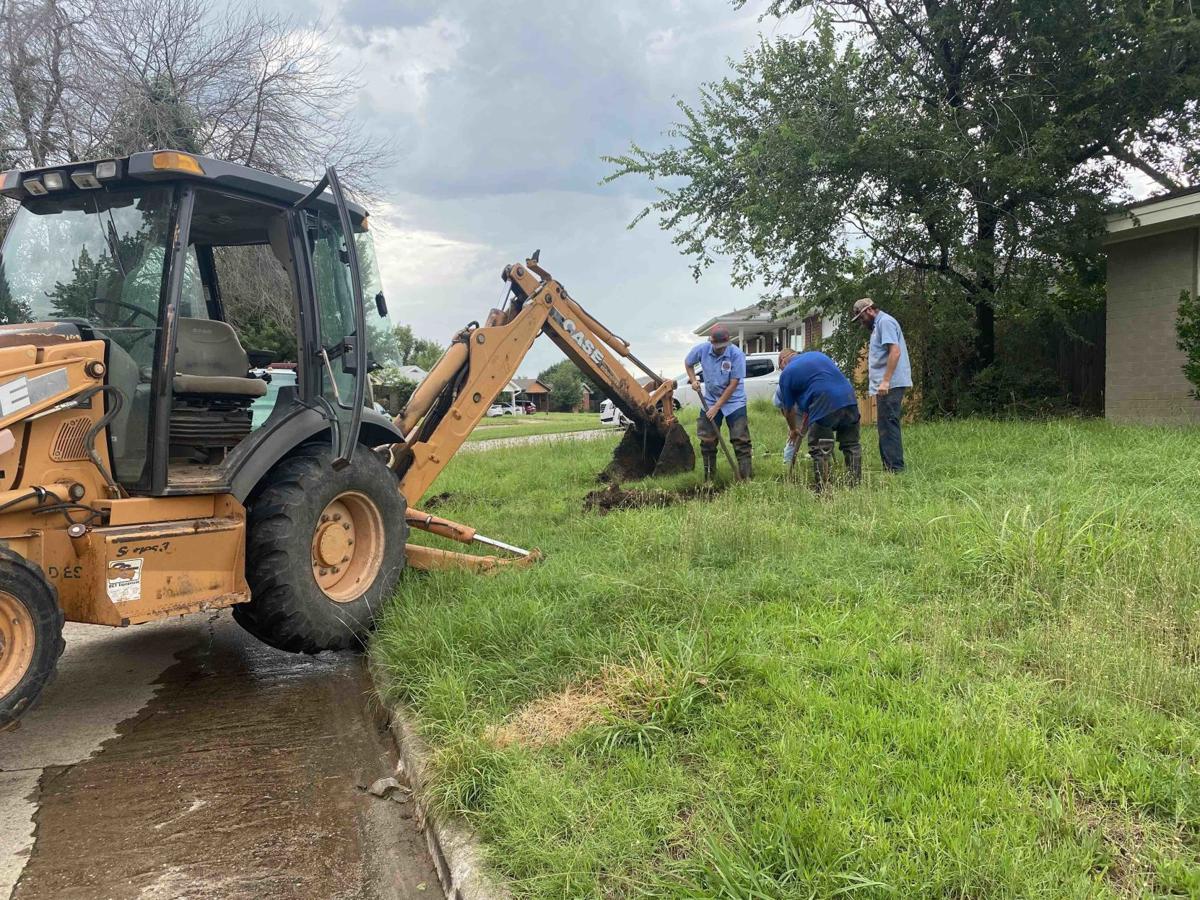 A City of Lawton water crew repairs a waterline break on Lynn Circle last week. Such work is becoming more challenging, as the Public Utilities Department and other city departments face staffing shortages because efforts to fill empty positions have not been successful. 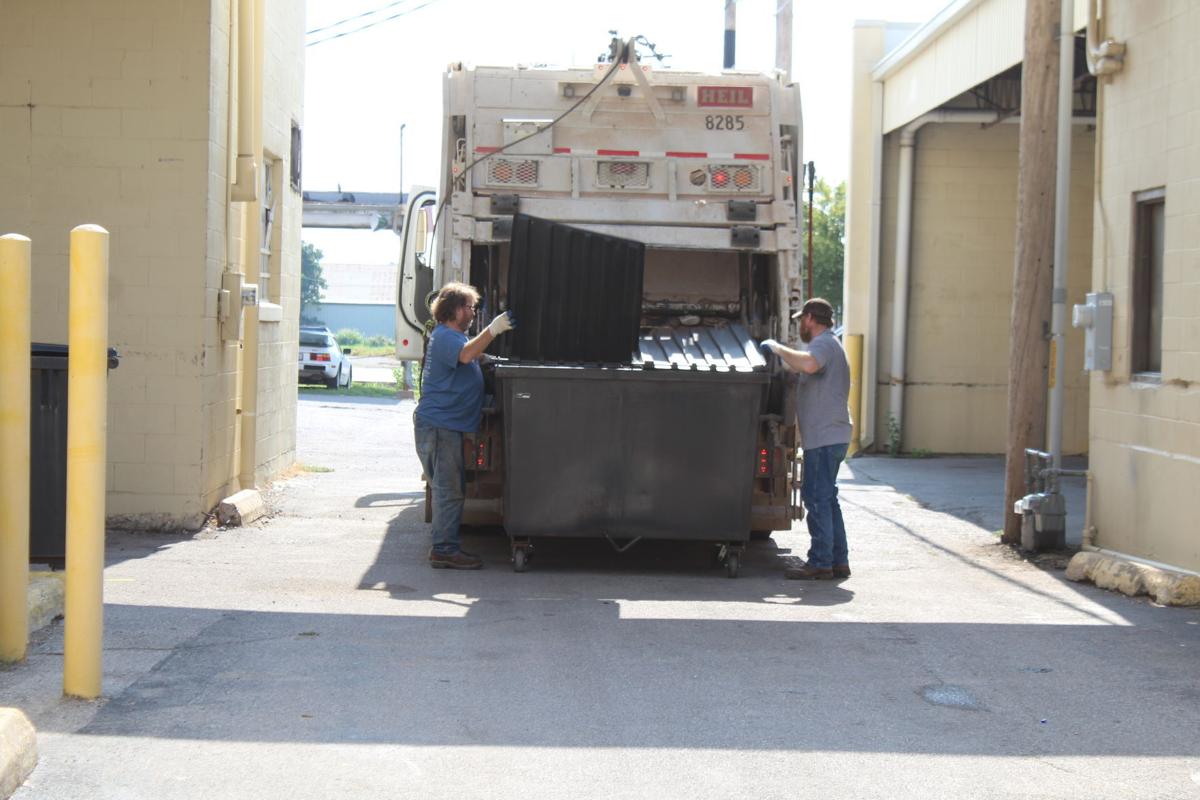 A City of Lawton solid waste crew empties a commercial dumpster Friday, during their normal rounds. The division is among those experiencing severe staffing shortages, as city administrators explore options to fill at least 90 vacant positions across city departments.

A City of Lawton water crew repairs a waterline break on Lynn Circle last week. Such work is becoming more challenging, as the Public Utilities Department and other city departments face staffing shortages because efforts to fill empty positions have not been successful.

A City of Lawton solid waste crew empties a commercial dumpster Friday, during their normal rounds. The division is among those experiencing severe staffing shortages, as city administrators explore options to fill at least 90 vacant positions across city departments.

The City of Lawton has 90 vacant positions among its departments, and more than 50 are associated with the labor-intensive divisions that comprise the Public Works and Public Utilities departments.

The issue is one being faced by employers across the nation, but it may be more acute among those centered around service-related duties, such as local government. And, among local government the issue is a special problem for those divisions whose work cannot be put off until next week.

Director Rusty Whisenhunt said the impact of those empty spots is immediate and strong: the water-related divisions within Public Utilities are “24/7” and employees must do what they do even with empty slots. The result?

“Additional overtime,” he said, adding that in addition to longer hours, the shortage means those with scheduled vacation or leave time can’t take it.

A lack of workers also slows down repairs, he said, of work done on water and sewer lines that break, or work necessary to keep the water and sewer plants operational. For repairs, that could mean hiring contractors to do the work city crews normally handle but can’t because there aren’t enough personnel, like repairing a recent waterline break on West Gore Boulevard.

Public Utilities is one of the departments experiencing a lack of applicants with commercial driver licenses (CDL), and that’s important for positions such as equipment operators who drive the backhoes needed in water and sewer repair work. But, personnel shortages aren’t just hitting the repair side of the department. In a world of high tech, technical skills are crucial to water and sewer plant work, and there are shortages in lab technicians and plant operators.

Whisenhunt said the problem is one he and other department heads haven’t seen before. It isn’t just that there are few applicants, or applicants without skills.

Whisenhunt, like employers across the nation, has ideas about what is going on.

“Good pay is part of the issue,” he said, of a theory shared by others in city government.

Employees with critical skills (such as CDLs) have their choice of work. Whisenhunt and other department heads are competing with other entities for employees with CDLs; truck drivers are being offered $15,000 signing bonuses and pay of $25 an hour, for example, if they promise to stay six months.

“We’re not able to do a hiring bonus,” he said, noting the department has limited options beyond raising salaries.

Director Larry Wolcott agrees salaries are a major factor in the lack of employee recruitment.

“Even though the city’s benefits such as leave, insurance, and retirement may be of a higher value than some private competitors, many times potential employees simply look at the paycheck amount when deciding on a job,” he said.

Wolcott isn’t certain why applications are down significantly, saying it could be multiple factors: additional unemployment benefits due to COVID-19, the city’s pre-employment drug screening requirements, or competition from other employers. For his department, which includes divisions such as streets and solid waste, the type of work may be a factor.

“Many of the city’s positions are skilled labor or equipment operator positions that can be physically demanding, which could also deter some candidates,” he said.

Public Works’ biggest problem is in some of its largest divisions because they employ workers with special skills, such as cement finishers, equipment operators and sanitation operators. Most require commercial driver licenses, which can be a tedious process, and while some positions allow an employee six months to obtain a CDL, sanitation equipment operators must have CDLs to be hired.

“The trucking industry in general has a shortage of drivers, so recruiting an employee that already has their CDL is even more difficult,” he said.

Wolcott said the shortage of employees can mean less work being done. Less than full crews impacts solid waste’s ability to collect refuse in a timely manner. While trash and bulk debris still are collected, it takes longer and that prompts customer questions and complaints that must be investigated, taking even more staff time. And, the number of street repairs accomplished is directly related to the number of streets employees who are working.

“The burden of the total workload being placed upon an inadequate number of employees can be very stressful,” he said. “It also can make it difficult for those employees to utilize the leave that they have earned since there are not enough employees to perform the necessary work in their absence.”

Parks and Recreation: 5 regular and 10 seasonal

Director Jeff Temple said his primary problem is in the grounds and parks maintenance divisions, who maintain the high visibility areas such as parks, medians and city properties. Much of that work is seasonal, meaning the spring and early summer growing season.

“For that reason, we use summer temp labor to get us through the season,” Temple said, adding that typically means adding such personnel in the spring and using them through June.

But, today is Aug. 1 and an abnormally rainy summer has grass and other vegetation growing when it typically would be dormant or dead, and that means “we still need them this year.” “Them” are seasonal workers who simply weren’t available this year from the temporary labor agencies that normally provide them, Temple said.

That means the personnel who typically go behind the city mowing crew using weed-eaters and cleaning up aren’t there. So, employees who typically are responsible for only mowing — they mow, then move on to the next site — must park their mowers and do the cleanup.

“It’s causing our schedule to fall behind,” Temple said, adding new equipment added to the park’s inventory was supposed to help, before the severe employee shortage surfaced.

Temple said he thinks several factors are at play in recruitment, such as, money available through unemployment benefits is more than people could earn as entry-level city employees.

Temple said the department is working around the issue, to include working overtime on an as-needed basis. He’s also been allowed to move employees from other divisions to let them help in parks and grounds. Larger equipment has allowed mowing to be accomplished more quickly. But, Temple said the ultimate solution may be money.

“Try to pay more — that would solve the problem,” he said.