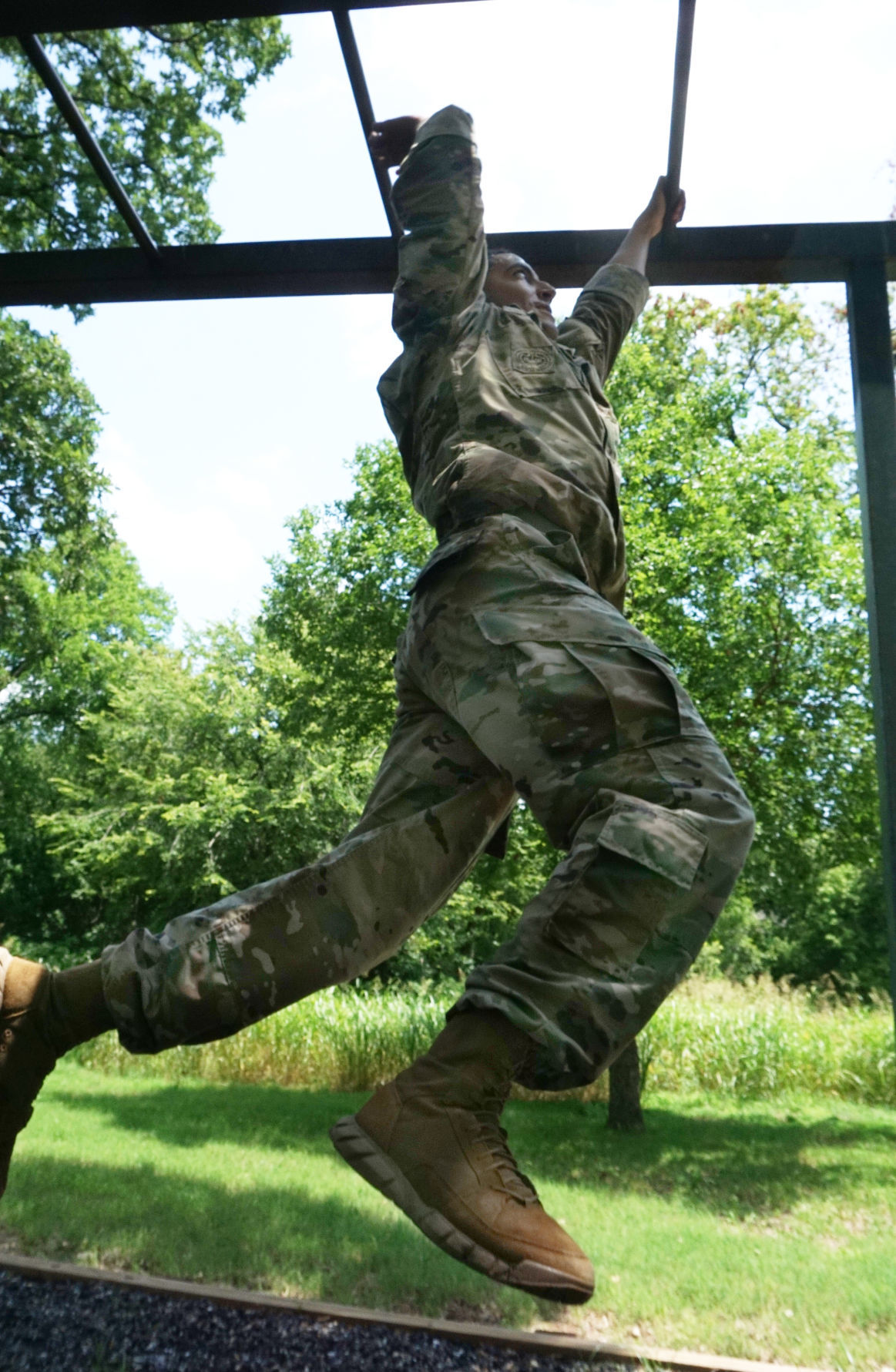 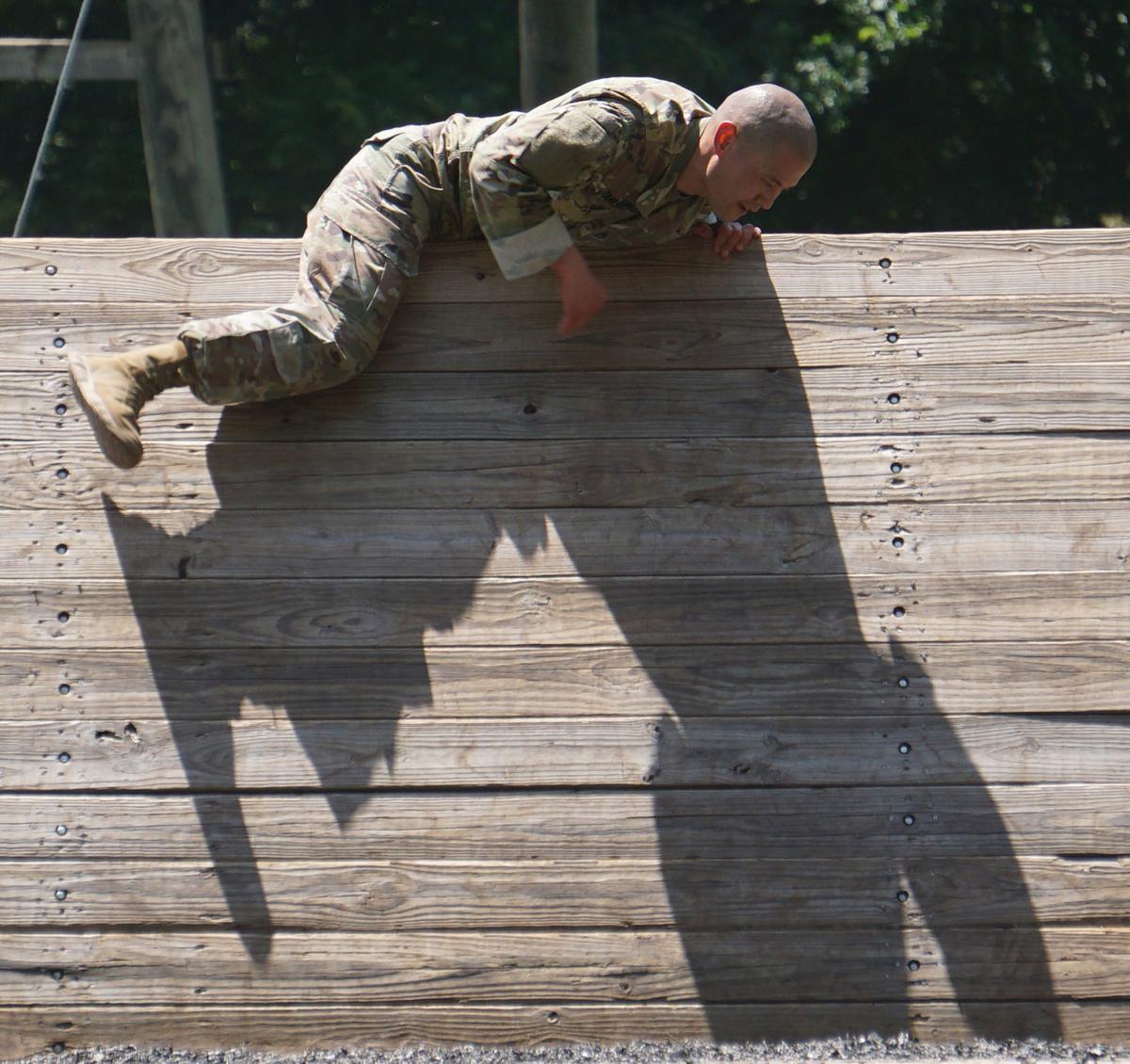 Fort Sill’s 2019 Drill Sergeant of the Year, Sgt. 1st Class Benhur Rodriguez, flies over The Inclining Wall in the Best Warrior Competition going on this week at Fort Sill. 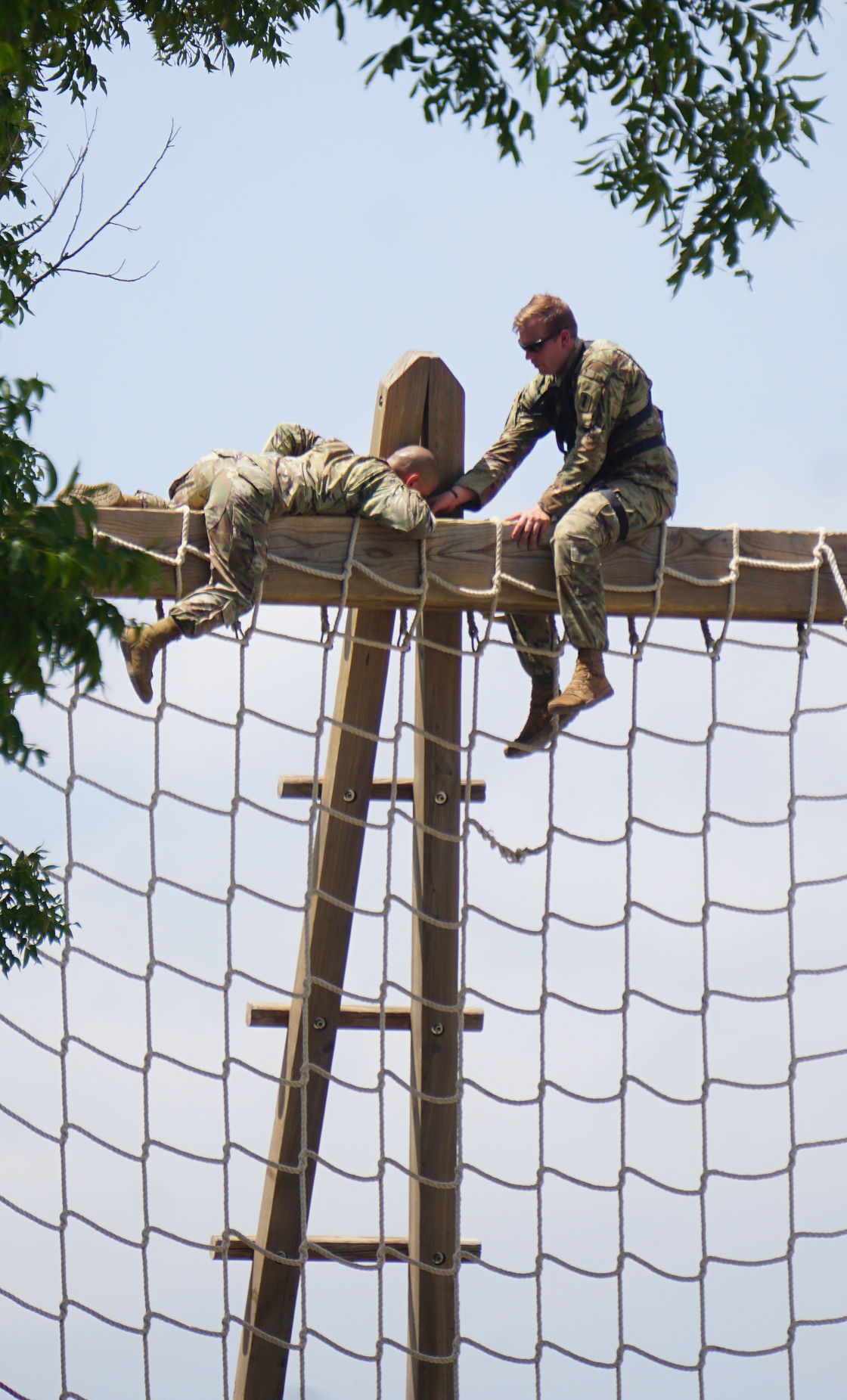 Staff Sgt. Paul Tamashiro, left, makes the turn at the top of The Tough One obstacle as Drill Sergeant Daniel Fricke keeps a close eye for safety during the  Best Warrior Competition going on this week at Fort Sill.

Fort Sill’s 2019 Drill Sergeant of the Year, Sgt. 1st Class Benhur Rodriguez, flies over The Inclining Wall in the Best Warrior Competition going on this week at Fort Sill.

Staff Sgt. Paul Tamashiro, left, makes the turn at the top of The Tough One obstacle as Drill Sergeant Daniel Fricke keeps a close eye for safety during the  Best Warrior Competition going on this week at Fort Sill.

It was 92 in the shade. The humidity was 58 percent, and the wind was out of the south at 19 mph, making it feel like 107 degrees outside.

And yet, on this sultry Monday afternoon six soldiers and noncommissioned officers from 434th Field Artillery (FA) Brigade were rushing about the Combat Obstacle Course like mad dogs and Englishmen. This timed event concluded day one of a belated Best Warrior competition, with each entrant entertaining hopes of winning the coveted title.

Because of COVID-19 concerns, the post-wide competition that was to have been held earlier in the spring had to be rescheduled, according to 1st Lt. Caroline Negrete, who is supervising two of the events. Also, the contest has been broken down by brigades, and the winners in each brigade will have a runoff later to determine who is Fort Sill’s best NCO and best soldier of the year.

Prior to the Combat Obstacle Course they competed in a run, the Army Combat Fitness Test and marksmanship. The competition continues at 4 a.m. today with a 10K (6.3-mile) run and ends Thursday morning with a 12-mile ruck march. Again because of COVID-19, this year’s ceremony to announce the winners will be closed to outside personnel.

Today the contenders will complete various training lanes to test their soldier knowledge and skills, Negrete said. They’ll be expected to have subject-matter expertise on first aid, how to react to improvised explosive devices, the ability to assemble and disassemble various weapons, and land navigation.

Negrete said it’s to figure out who’s the best and the most well-rounded when it comes to knowledge and physical fitness.

Two lanes were eliminated from the Combat Obstacle Course. The Skyscraper is a team event requiring four personnel, so it was cut to maintain social distancing. The Inverted Rope was damaged by a falling tree this past spring and for safety reasons it hasn’t been repaired yet.

Staff Sgt. José Vallé of D Battery, 1st Battalion, 19th FA, was the first to go through the course, and he sped through the remaining 16 obstacles in roughly 13 minutes. He’s been a drill sergeant here for 11 months, and while he hasn’t been in a contest like this before on Fort Sill, he’s competed at similar events on Fort Campbell, Ky., and Joint Base Lewis-McChord, Wash.

“I’ve done pretty good at other competitions. This one was a little tough, a little different, but just the competition itself brings out the best,” Vallé said.

The drill sergeant said he was definitely feeling the heat, especially through all the obstacles.

“It’s just a long time running around and it does drain you, sir,” Vallé said. “I tried my best. Wish I could have done it a little bit faster, but I did my best out there. They’re timing us from the start, completing all obstacles. There’s time restraints if you fail an obstacle or exercises you have to do if you fail an obstacle, but I think I did pretty good. No faults and no exercises.”

Vallé said he couldn’t practice on the course itself because it’s usually reserved for the training units, but he did work out on his own just to get used to the high intensity of what the competition holds.

He said his whole family is backing him up and pushing him the entire way. They helped him study for the knowledge portion along the way and encouraged him when he felt down.

“I’m just doing this for them,” said Vallé, who has a fiancée and two sons of his own who have been watching him on Facetime.

He’ll be up against some stiff competition in the form of 434th FA Brigade’s reigning Drill Sergeant of the Year, Sgt. 1st Class Benhur Rodriguez. Winning the DSoY competition means that for one year he works directly for the brigade commander and command sergeant major. He is the subject-matter expert on anything related to programs of instruction or Basic Combat Training, so when there’s a question he’s there to answer it.

Rather than resting on his laurels, Rodriguez was out in the scorching sun, sweating and straining with the other five hopefuls.

“I’m never satisfied with any achievement. And while I still can I want to continue to push myself,” said the 31-year-old husband and father of three, two boys and a girl. “I couldn’t do all these competitions if it wasn’t for my wife taking care of three young kids at home.”