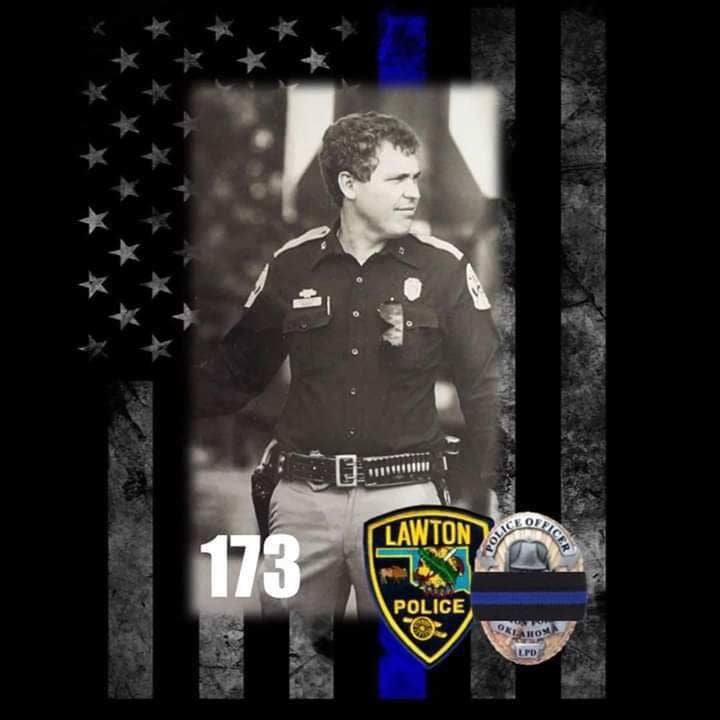 The Lawton Police Department recognizes the impact Badge No. 173 made in his decades of service. Officer badges will carry the black memorial bar in honor of the late C.H. Brazzel. 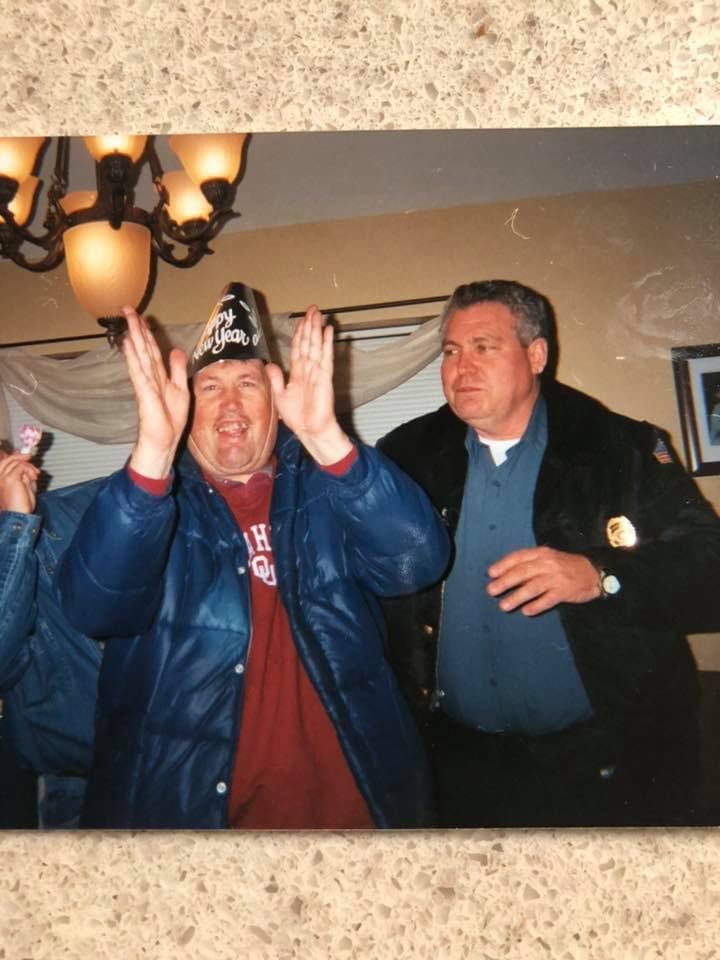 The over-40-year friendship between the late-Raymond McAllister, left, and C.H. Brazzel is remembered as one bonded deeper than blood. 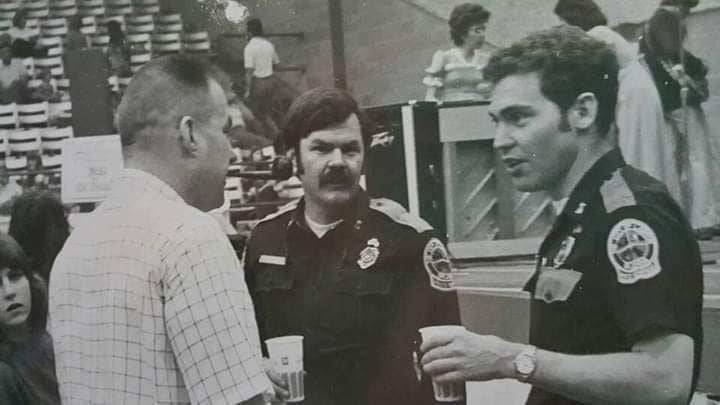 Even as a young officer, C.H. Brazzel, right, would engage in interested conversation with members of the community, as fellow officer Terry McDougal witnesses. 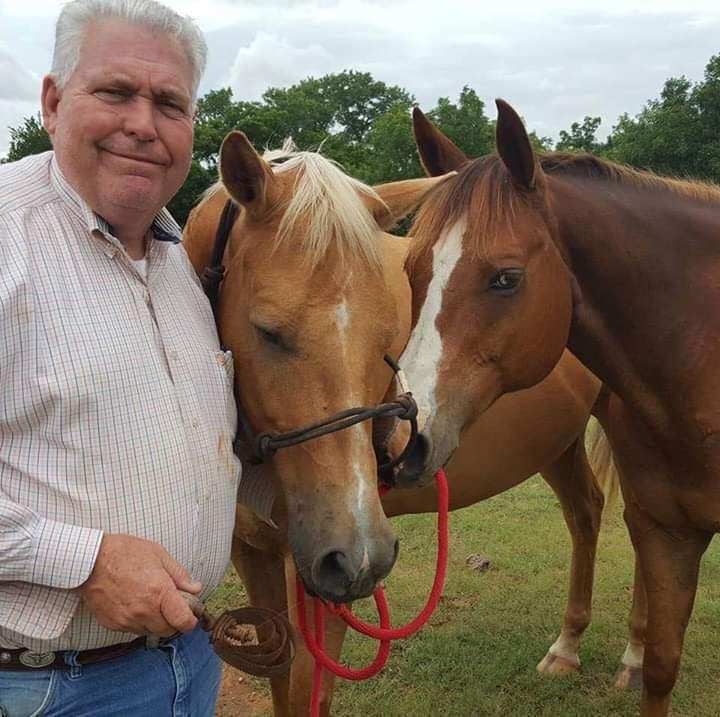 A devoted farmer/rancher, C.H. Brazzel had a fondness for his horses. He was a long-time member of the Comanche County Farm Bureau.

The Lawton Police Department recognizes the impact Badge No. 173 made in his decades of service. Officer badges will carry the black memorial bar in honor of the late C.H. Brazzel.

The over-40-year friendship between the late-Raymond McAllister, left, and C.H. Brazzel is remembered as one bonded deeper than blood.

Even as a young officer, C.H. Brazzel, right, would engage in interested conversation with members of the community, as fellow officer Terry McDougal witnesses.

A devoted farmer/rancher, C.H. Brazzel had a fondness for his horses. He was a long-time member of the Comanche County Farm Bureau.

When the name of C.H. Brazzel is mentioned, three words conjure the spirit of the man: compassion, integrity and humanity.

Since the 1970s, Brazzel’s mischievous-yet-warm smile, kind personality and ever-present law enforcement uniform embodied the connection between law officers and the community. From his decades as a Lawton Police Officer and, later, a reserve officer, he served his hometown. He embodied Robert Peel’s oft-cited reminder that “the police are the public and the public are the police.”

The 70-year-old Brazzel’s death Monday morning from a wreck southeast of Lawton struck many in the community hard. The life-long lawman made a difference in many lives through his ongoing service.

Lawton Police Chief James T. Smith spoke highly of Brazzel. Although the two didn’t serve together a long time in the scheme of things, an impression was made on the chief.

“He helped any way, anyone and anytime that he could,” Smith said. “He truly was one of the best and most dedicated officers that the Lawton Police Department was privileged to have serve.”

Sgt. Jeremy Coe said the loss of Brazzel continues to be absorbed within the department. And it hurts.

“We are all still in shock,” he said. “His loss left a void in our lives.”

Coe said he hopes that Brazzel is remembered through the naming of the new public safety building under construction at Railroad Street and Gore Boulevard. He said the long-time officer made an impact on every officer he worked with and it would be a fitting honor.

“C.H. was a mentor to the rookie officers and showed us how to be compassionate towards others,” he said. “He was a wonderful and caring man.”

Brazzel knew a lot of people on both sides of the law. Coe said it had to do with the fact his senior officer cared about others like a family member “who saw the good in people.”

A wicked sense of humor and fun was as much a part of Brazzel’s character as any of the characters encountered throughout his life.

“He loved coffee and conversation; free food was probably his favorite,” Coe said. “He had a great memory. He could remember the date, time and weather and what everyone was doing that day.”

Comanche County Sheriff’s Deputy Bobby Dodd, a retired member of the Lawton Police Department, remembered his friend of the past 34 years. He knew the senior officer through several names including Officer Brazzel, C.H., and Joe Friday in honor of the key cop in the old “Dragnet” TV series.

“I loved him,” Dodd said. “I’ve got a lot of good memories of old Joe, about three-quarters of them I can’t tell.”

Dodd recounted the first time he really got to know who Brazzel was as, both as a man and an officer. It was while undergoing field training in 1986 and he was assigned to serve with Brazzel for two days.

“The very first morning I got in the unit with him, he said, ‘Bear with me, I need to go check on some folks,” he said. “We left the police station and drove straight to the Greiner School to visit all the special needs people attending the school.”

Dodd said Brazzel introduced him to Col. Greiner as well as the late-Raymond McAllister.

“Little did I know they would both impact my life throughout my law enforcement career,” he said.

After about 30 to 45 minutes spent at the school spent hugging and conversing with the students, Brazzel and Dodd then went to a local church that served breakfast to the homeless.

“We sat down and, C.H. didn’t mind free food, me either at that,” he said. “But we spent about the same amount of time as at the school chatting with these homeless folks. You get to know people and about people that way.”

Brazzel’s relationship with McAllister was something special. Two of the most recognizable Lawtonians around, when McAllister died in 2018, Brazzel’s tribute to his late-friend at the funeral service remains a favored memory to many. Their bond was a familial as it was friendly. That was another trait of the late-officer’s.

Comanche County Sheriff Kenny Stradley spoke of his friend of over 45 year’s death. He was there to help carry Brazzel one last time from the wreckage Monday morning and said the emotions were thick.

Stradley said he and Brazzel became friends while both served on the police department. It continued faithfully in the years since.

“He was a great friend,” Stradley said. “There’s friends and then there’s friends you can always depend on. He was an above-and-beyond good guy.”

Stradley said the friendship continued through Brazzel’s run against him for sheriff. They decided that no matter who won, their friendship wouldn’t be lost in the election’s wake.

“The day after I won I went with him to pick up his campaign signs,” he said. “We were such good friends. He’s not a guy to lose that friendship for something like that. That’s what kind of friends we were.”

Brazzel was a friend to all in the community, Stradley said. Being kind and spreading it forward reaps that reward in return.

“No matter who you were, he was your friend, always taking the time to stop and say hello,” he said. “That’s a rare quality nowadays. He will be truly, truly missed by me and this whole community.”

Stradley noted that Brazzel rarely had down time. Along with his law enforcement work, he was always working an odd job. He wasn’t a man to stay idle for long, he said.

Brazzel’s friendship with McAllister was something well known. Stradley said you got used to it that if you saw one of them, you probably saw them both. They both stayed busy and were staples at community events.

The sheriff remembered Brazzel sharing a story that continues to resonate with him from McAllister’s funeral. He pictured McAllister greeting his old friend to show him around heaven.

“They were coming from a funeral and C.H. told Raymond, ‘One day you’re going to have a funeral,’ and Raymond said, ‘I don’t have time for that,’” Stradley said. “He’s probably saying that right now.”

Retired LPD records clerk Augie Moore remembered meeting Brazzel when she began working for the department in 1995. He proved to be a mentor to her in key ways. He also proved to be a dear friend.

“He was always kind, truthful and honest and taught me some things about the people he and the other officers had dealt with and how to handle them in a respectful way,” she said. “That information made my job more important because he, and a few other officers, were about ‘the people.’ He was one of the best.”

Even with burgeoning crime beat reporters, Brazzel always found his way to be one of the first people you’d meet. He knew everyone had a job to do and, much like with his role as a public servant, he wanted to help you become your best.

The impact that comes from getting to know the people he was sworn to serve and protect made Brazzel the officer everyone could trust. He connected with the people he would arrest as if they were family. Several people who have dealt with him from that side of the handcuffs speak of him with the same respect he would provide them.

When he could, Brazzel could also show, through his caring, a new direction, especially for youths.

Lisa Owen-Carlson spoke of meeting Brazzel, whom she called a “legend” and “kind and generous soul.” She said he was her favorite.

“I remember C.H. Brazzel always being at McDonalds when I was a rowdy teenager,” she said. “He was fair and really cared about keeping us safe without trying to overuse his authority.”

Brazzel’s presence throughout the community was always a friendly one. He was a leader by being who he was, Owen-Carlson said.

“He had the biggest heart and is the example of what a great police officer and man should be,” she said. “He was generous and understanding to us all. But I think he had a special place in his heart for the misfits. Like me.”

The City of Lawton is recognizing Brazzel’s life. The police station flag is to be flown at half-staff until he is laid to rest. Officers also are wearing black mourning ribbons over their badge. The Comanche County Courthouse also is flying its flag at half-staff in his honor.

Although Brazzel’s badge number is number 173, for many, he will always be number one to those he worked with as well as those he served.

“I loved him,” Owen-Carlson said. “He will truly be missed.”

This story has been edited to correct the name of Brazzel.