Cache firefighter Dakota Roseberry, standing near fire truck, speaks with homeowner Susannah Roach near her Quanah Road home on Thursday morning, a day after a fire swept through the area. A barn in the foreground is leveled into a heap of warped sheet metal. 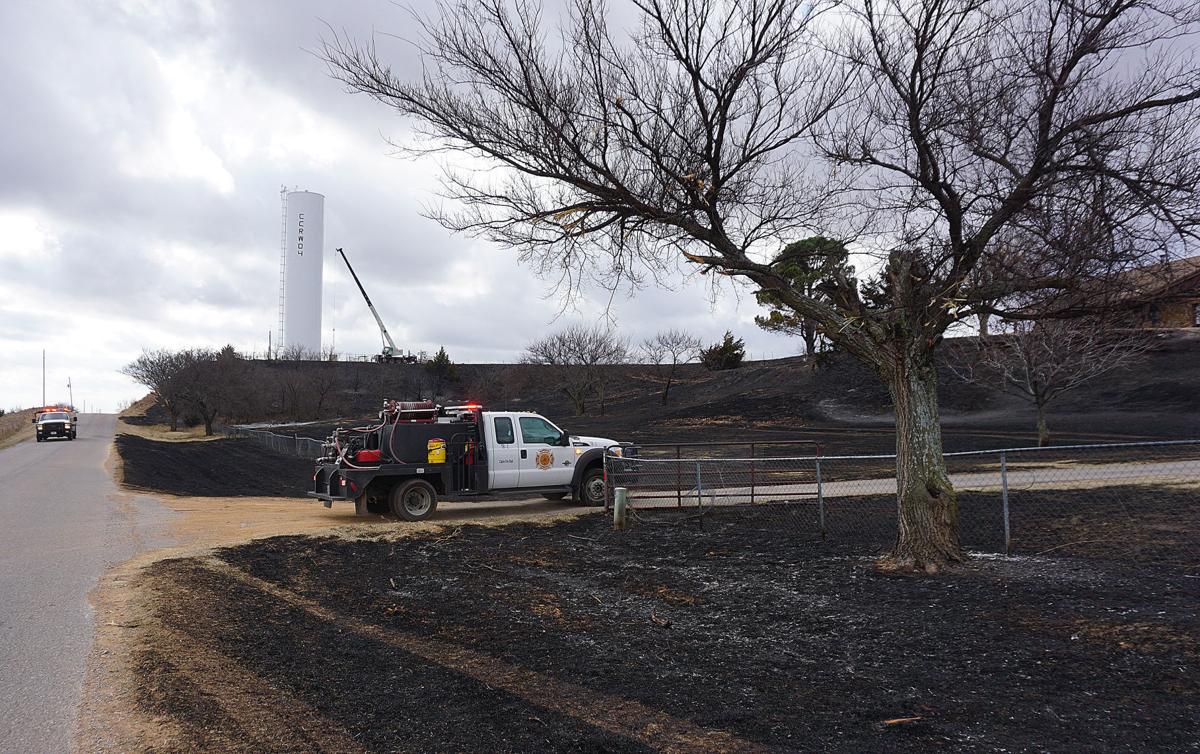 A Cache fire truck pulls into a drive of a home along Quanah Road while making assessments Thursday of damage from Wednesday’s fire that burned 200 acres. 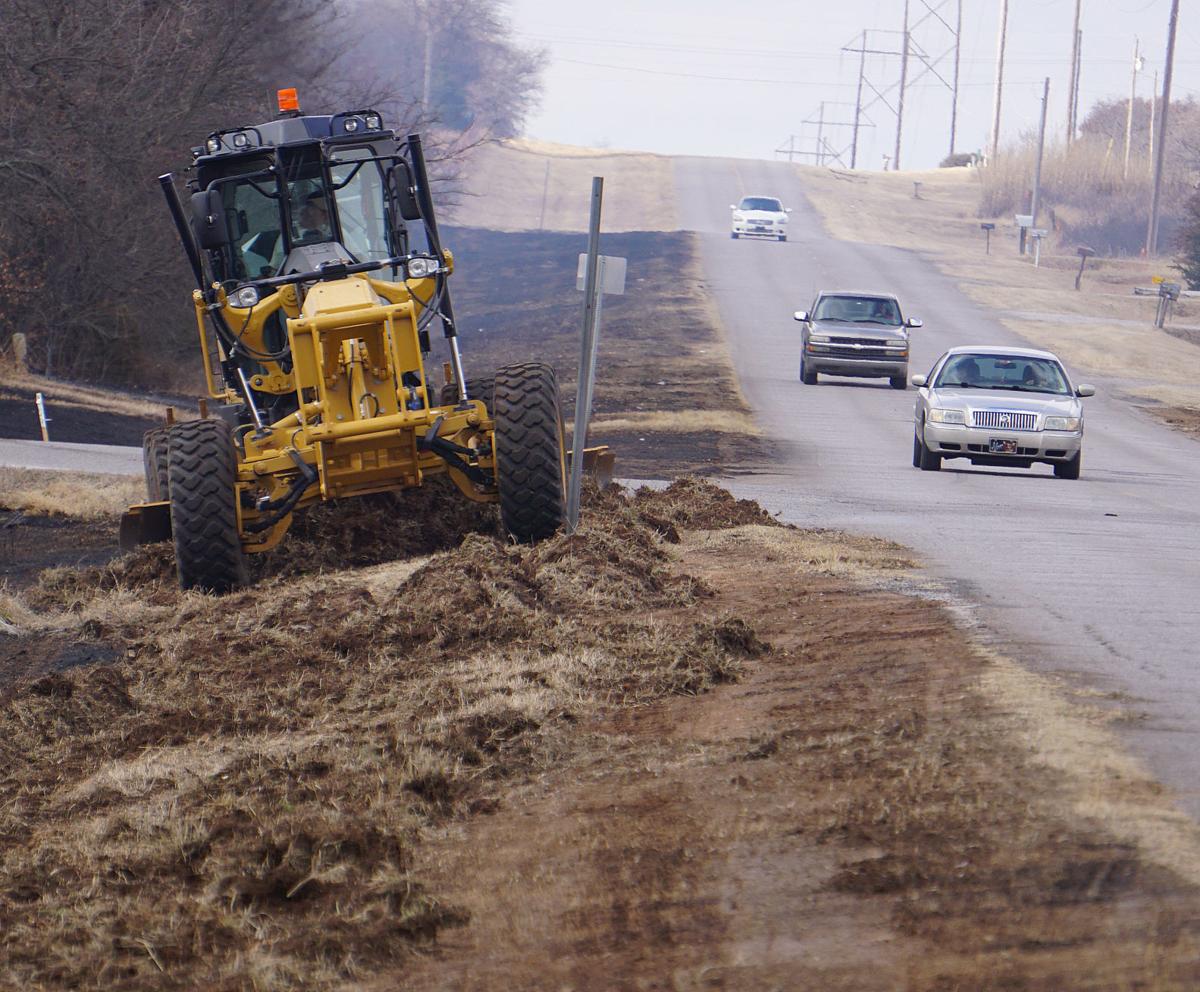 A Comanche County grader works over the ash soil in the ditch along Old Cache Road Thursday morning in the aftermath of the night before's firefight. 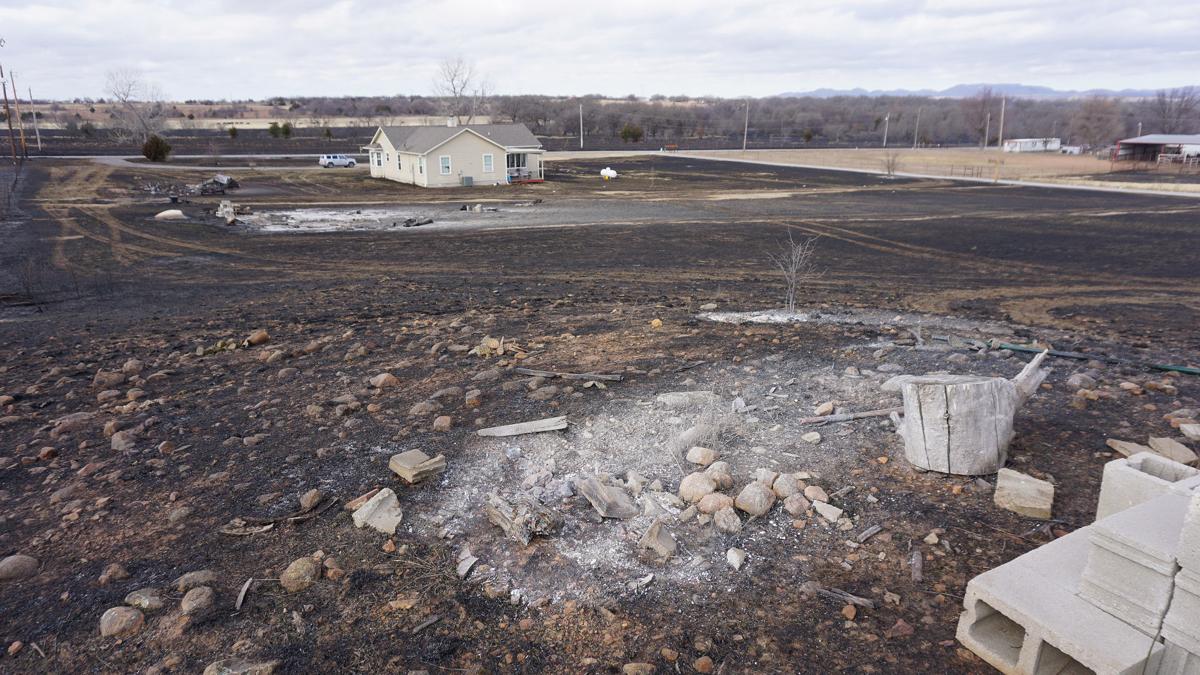 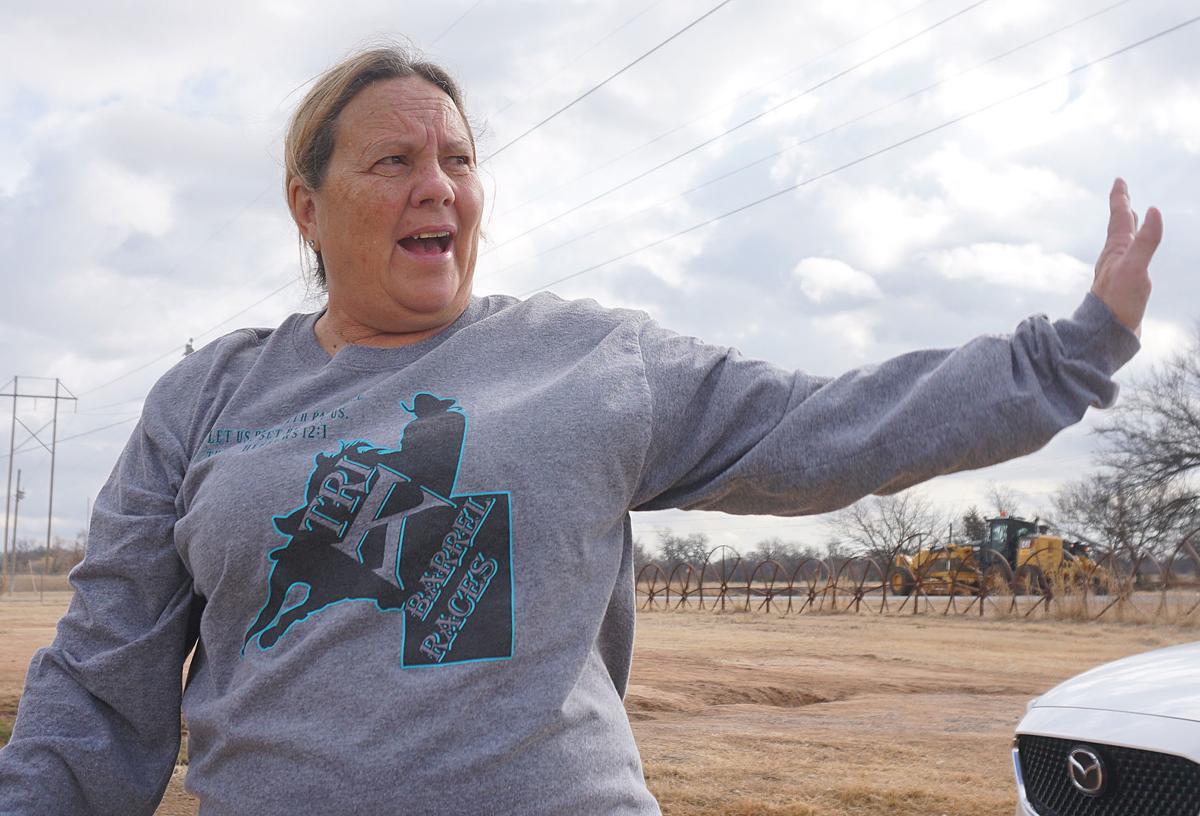 Kim Glenn becomes animated when describing her family's operation to save their horses from the onrush of fire Wednesday as the Cache fire that burned 200 acres along Quanah Road made for a precarious situation.

Cache firefighter Dakota Roseberry, standing near fire truck, speaks with homeowner Susannah Roach near her Quanah Road home on Thursday morning, a day after a fire swept through the area. A barn in the foreground is leveled into a heap of warped sheet metal.

A Cache fire truck pulls into a drive of a home along Quanah Road while making assessments Thursday of damage from Wednesday’s fire that burned 200 acres.

A Comanche County grader works over the ash soil in the ditch along Old Cache Road Thursday morning in the aftermath of the night before's firefight.

Kim Glenn becomes animated when describing her family's operation to save their horses from the onrush of fire Wednesday as the Cache fire that burned 200 acres along Quanah Road made for a precarious situation.

CACHE — In the aftermath of near devastation, the people of a small Comanche County community are finding fortune in the blessings that survive.

Although 200 acres of land, two occupied homes and countless number of barns, sheds, outbuildings and other assorted property were consumed by Wednesday’s fire along Quanah Road, no lives were lost.

Cache firefighter Dakota Roseberry visited homes in an attempt to assess the cost of the battle from the day before. He said he’d remained on the scene through most of the night, going home only for a short rest. With the amount of land and property burned, it took the effort of 17 fire departments and 20 different agencies to find victory. Although the two homes were lost to the fire, dozens more survived.

“This is one of the worst ones I’ve dealt with in a long time,” Roseberry said. “I don’t know how we didn’t lose more than we did.”

“We’re super grateful for everyone who came out,” he added. “I wish I could thank them all personally.”

You can see where the fire’s beginning point is at the base of the Comanche County Water District 4 tower on Quanah Road. Investigators determined that contractors accidentally ignited the blaze by either welding or grinding, sending a spark to the parched grassland below. That spark’s calamity moved to the north at a breakneck pace.

As Comanche County road graders and loaders cleaned up the runoff canals along Cache Road to Quanah Road on Thursday, the endline for the firefight is visible. If it had continued, many more than 100 people would have been displaced.

Roseberry said he was continuing to learn more about the fire as he spoke with survivors. One of those he talked with was Susannah Roach.

Roach looked over her burn-scarred land where her late husband’s barn and shed lay smoldering on the east side of Quanah Road. The curled and flame-scarred sheet metal appeared like wilted flowers seared and warped from heat and stress.

“We depended on the Lord,” she said. “It was the good Lord watching out for us.”

Roach said her daughter who lives a short distance down the hill alerted her to the fire moving closer to her door and that she was coming to get her. In the short time between call and arrival, the fire raced closer to the brick house she’s called home for the past 15 years.

Cache and Bureau of Indian Affairs (BIA) firefighters made a stand and staved off the oncoming flames. You can see where the battle was won at the base of Roach’s home. She was able to return to it and stay for the night.

Roach said she was fortunate her late husband made sure the home and property are properly insured. She talked to her agent Thursday morning and was expecting an insurance adjustor to visit soon.

“It’s my home,” she said. “It hasn’t been touched, smoke didn’t get inside. I feel blessed.”

BIA firefighter Scotty Kopepassah was one of the firefighters who helped save Roach’s home. He returned Thursday to examine the situation under less duress. He described efforts to force the fire around the home and other neighboring homes during Wednesday’s battle.

“It was crazy last night,” he said. “I’m glad we caught it and put it out before it spread.”

A phone call while he was at work Wednesday afternoon sent Roach’s son-in-law Darrell Wahkinney into active mode.

“I hot-footed out here real quick,” he said.

Wahkinney said his wife, kids, two cats, a dog and his mother-in-law were all able to make their escapes as he and a brother entered the fray. He lost a wood pile and a shed that contained some lawn equipment. Scorched earth showed his home survived a close call. He credited a lack of potential kindling around his home with providing the chance of survival. He remained up through most of the night watching for hot spots.

“It got right up to the house,” he said. “If we had any shrubs or cedar trees, it would’ve gone up.”

Eleanor McDaniel and her husband were at their Quanah Road home when the fire made its way to their property.

McDaniel said things got hairy when the flames jumped the roadway and went into her neighbor’s yard. That’s when a police officer arrived and told them to evacuate.

“My husband is disabled and we both rushed to get out,” she said. “We ran out and saw our whole neighborhood ablaze and engulfed in a thick dark smoke.”

Although the family home was untouched by flame, the effect of the smoke was daunting, McDaniel said.

“We were lucky that our house was saved, but the smoke was overwhelming,” she said.

McDaniel’s asthma, coupled with the smoke and ash, caused her to seek medical attention.

“I just got discharged from the emergency room and just got home at 6 a.m. this morning,” she said.

Due to the unfortunate circumstances, McDaniel said a flea market and Indian arts and crafts sale that had been scheduled for Saturday at the Cahoma Building has been canceled.

A no trespassing sign and orange road cones blocked access to a home on the south side of Cache Road that was lost to the fire. Several neighboring homes were surrounded by a sea of soot.

On the north side of Cache Road, Kim and Doug Glenn, along with their son Justin Stidham and daughter Lindsey Johnson, were gathering items. Although the home survived the fiery threat, the strong smell of smoke is too much for them to deal with inside the home. A hotel will provide temporary housing.

“It’ll probably be another couple of days before we can stay in the house,” Kim Glenn said.

The mother spoke of how her husband, other daughter Stephanie Sullivan and her husband Phillip, as well as a host of other heroes worked to save their horses from a barn that was in the path of the oncoming blaze.

“They had to cut two fences to get the horses out of there,” she said.

The horses made their way into the woods on the north side of Cache Road. Later Wednesday night, the family recruited others and, with about 15 people on board to help, they had to get the horses back out of the brush and loaded on trailers for transport. They are staying temporarily at an indoor barn near Lake Lawtonka.

After surviving floods and tornadoes, Kim Glenn said there’s nothing that evokes as much fear as a fire like Wednesday’s.

“I’d rather have that flood, that tornado,” she said. “My emotions yesterday were worse than they’ve ever been.”

Johnson remained upset with the situation Thursday. After evacuating their home Wednesday night, she joined her family just past the restricted line law enforcement established on Cache Road. While walking down the roadway to cross over and join with her family, she was yelled at and then cited by an Oklahoma Highway Patrol trooper.

In the aftermath, and with a clear view of what could have been their fate across the street, Kim Glenn offered perspective to surviving the ordeal.

CACHE, OK — Comanche County Emergency Management offers insights into the Cache fire, its origins, its damage and its responders.