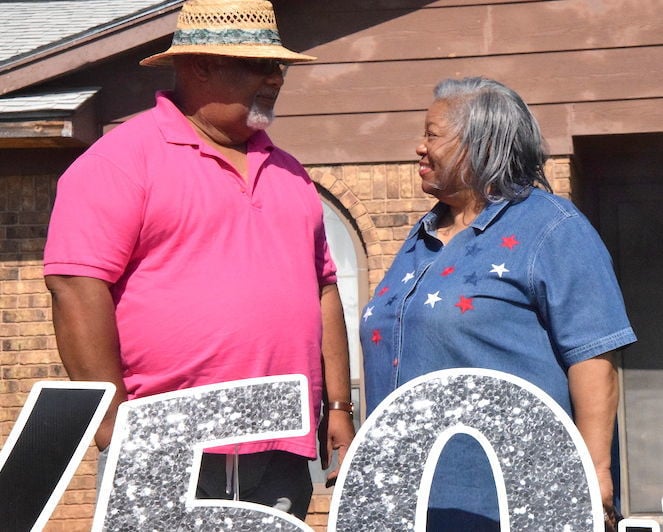 After 50 years married, Dwight and Cathy Singleton still look at each other with those eyes of love first found in high school. 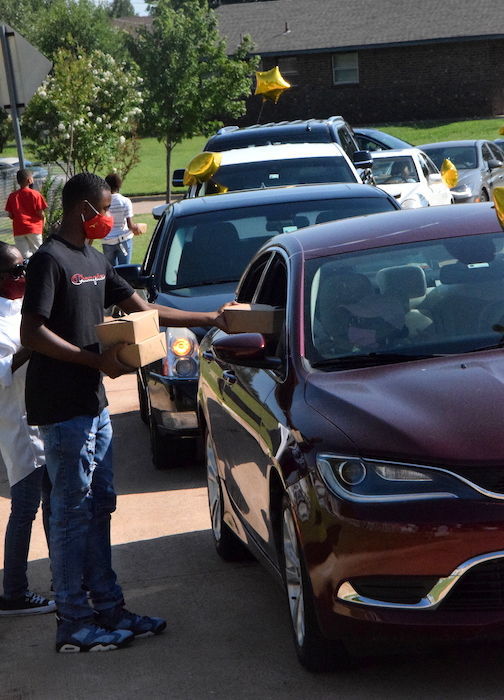 Singleton family friend Freeman McGahee helps pass out two pieces of fried chicken, baked beans, a sweet dinner roll, a pepper and a specialty cupcake with the Dwight and Cathy Singleton's picture on it to those who drove by Saturday to celebrate the couple's 50th wedding anniversery.

After 50 years married, Dwight and Cathy Singleton still look at each other with those eyes of love first found in high school.

Singleton family friend Freeman McGahee helps pass out two pieces of fried chicken, baked beans, a sweet dinner roll, a pepper and a specialty cupcake with the Dwight and Cathy Singleton's picture on it to those who drove by Saturday to celebrate the couple's 50th wedding anniversery.

To celebrate a half-century of love Saturday afternoon, you sometimes have to take a different route.

In a time of COVID-19 concerns as well as trying to keep plans under wraps, it means being creative.

That’s why, in honor of her parents, retired Army 1st Sgt. Dwight and Cathy Singleton, their daughter, Sonja Sanders planned a drive-thru, social distancing friendly party with the theme “A Two Piece and a Pepper Kind of Love.”

“A ‘Two Piece and a Pepper Kind of Love’ signifies our parents’ humble beginnings as a young couple, surviving and raising three children,” Sanders said. “Instilling in their children a love of Christ, a strong work ethic, being appreciative and satisfied for the little things you have. But always knowing that when times were hard, they had each other and God always had ‘a ram in the bush,’ in their case a piece of chicken.”

Dwight answered when asked if he was surprised about the day’s event:

“I don’t put no surprises by my oldest daughter,” he said. “But I am surprised.”

An almost overwhelmed Cathy indulged for about an hour with a GoogleMeet set up by the daughter. She said she talked with many friends and family from across the nation.

There’s a lot of love found in 50 years with this couple. A love for country, their children and for serving their community has permeated every minute of their time together.

It was a courtship begun in high school band, according to Cathy. She was in the marching band and when he wasn’t on the football field, he performed in the concert ensemble. Even after 50 years married and more together, she still looks at him as the handsome young man who swept her off her feet. But with the reality and humor of a lifetime as one.

“Yeah, with a little expansion on both of us,” she said. “Love can be blind at times.”

The Singletons were married July 10, 1970, at the Wayne County Courthouse in Jesup, Ga. Following their marriage, the couple lived in Georgia, Germany and, finally, in Lawton. Along with their daughter, Sanders, the couple have a son, Elgin Singleton, who lives in Conyers, Ga., and another daughter, Tonjia Singleton, of Columbas, Ga.

After retiring from the Army on Sept. 1, 1990, Dwight made a career at the Good Year Tire and Rubber Plant. He serves as an Associate Minister at Galilee Missionary Baptist Church.

No stranger to service herself, Cathy retired as the Assistant Director of Fort Sill School Services on Sept. 30, 2010, after 25 years. She also served on the Lawton Parks and Recreation Commission for the City of Lawton from 1990 to 1994 and received the City of Lawton’s Citizenship Award in 2009.

Cathy’s roles with the Galilee Missionary Baptist Church include being a member, the Matron for the GMBC Dr. L.K. Jones Ambassadors for Christ Drill Team and has been the Kitchen Committee Chairperson for over 34 years where she has been “preparing and serving delicious soul food to her church family and community,” Sanders said. She also is a volunteer cook for Community Feeding and Seniors Day Out programs.

So, it’s fitting that a special meal was made for the guests to Saturday’s surprise party. Sanders said everyone received two pieces of fried chicken, baked beans, a sweet dinner roll, a pepper and a specialty cupcake with the couples’ picture on it.

Dwight said the key to staying together and in love for over half a century means weathering all times: “good and bad, up and down, high and low.”

“You’ve just got to hang in there during the low,” he said. “It’s in bad times that you learn the real heart of another.”

Cathy concurred and said it takes a whole heart and commitment. It’s something not so hard when you know where your heart rests best. That includes with your children.

Sanders said that due to COVID-19 concerns, the party was planned to offer the maximum surprise and impact without adding danger. During a pandemic, you find new ways to congregate and celebrate.

Visitors began lining up around 4:45 p.m. at Parklane Elementary School and each tied gold balloons to their vehicles to signify the Golden Anniversary. Many decorated their cars, as well and also signed “congratulations cards.”

Once at the couple’s home, the guests stepped out of their vehicles and had their photos taken in front of a 50th Anniversary backdrop and received their meals. Serenaded by sweet sounds from the 1970s to honor the couple’s marriage year, it made for as good of an outside party as it gets.

Sanders said her parents deserve a celebration as special as they are. For that, she said, she is grateful.

“We are so thankful for our parents and their 50 years of marriage,” she said.