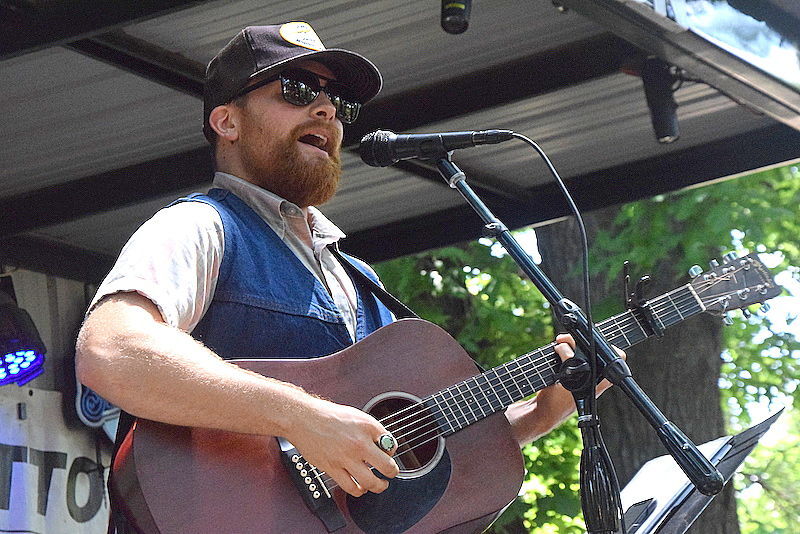 Jared Grice knocks out the crowd and kicks off Saturday at the Medicine Park Roots Ball with a powerhouse set with his one-man-show. 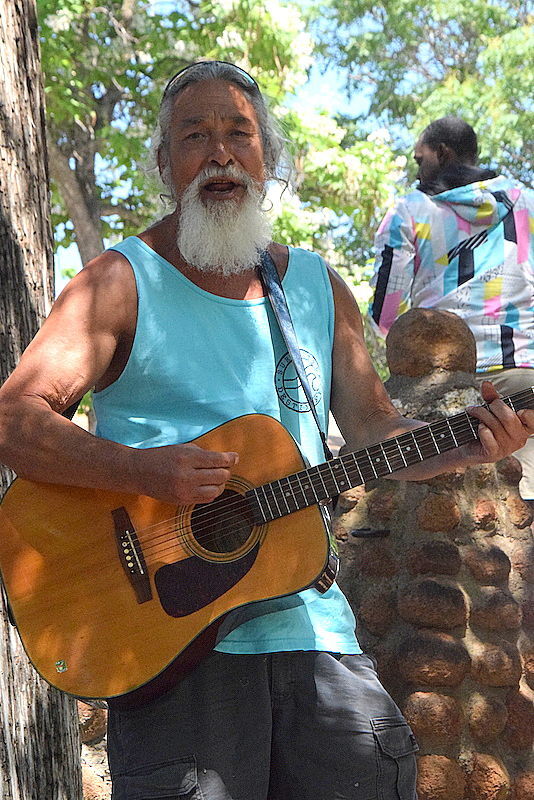 Dave Johnson, of Walters, puts his heart and shoulder into it while performing at the Santa’s Snack Shack stage by Bath Lake Saturday afternoon. Stages throughout town offered all visitors a varying musical soundtrack for Roots Ball weekend. 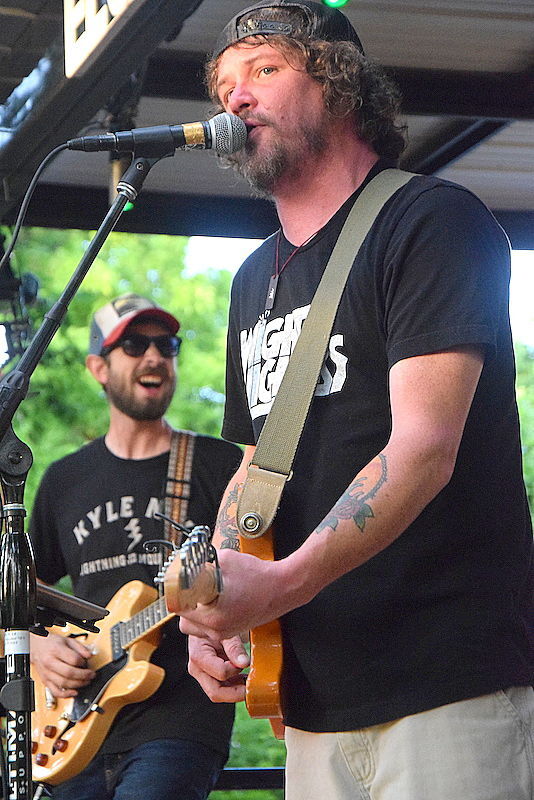 Debuting RDO Smokewagon, Ryan Oldham belted it out as Zach Holliday rocked it out last Friday to kick off the 2021 Medicine Park Blues Ball. They set a tone for the weekend. 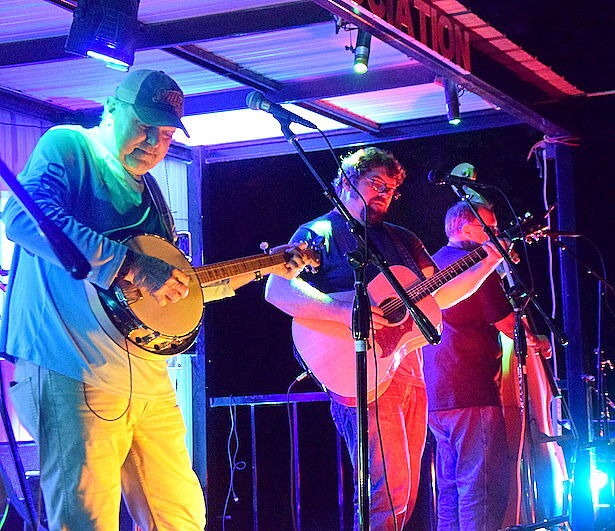 Jared Grice knocks out the crowd and kicks off Saturday at the Medicine Park Roots Ball with a powerhouse set with his one-man-show.

Dave Johnson, of Walters, puts his heart and shoulder into it while performing at the Santa’s Snack Shack stage by Bath Lake Saturday afternoon. Stages throughout town offered all visitors a varying musical soundtrack for Roots Ball weekend.

Debuting RDO Smokewagon, Ryan Oldham belted it out as Zach Holliday rocked it out last Friday to kick off the 2021 Medicine Park Blues Ball. They set a tone for the weekend.

But, with the new stage location at Hitchin’ Post Park and side stages set up throughout the town, you could almost call it normal.0. It was a reset with a new direction and the inspiration of one of the nation’s great music festival traditions at its core.

Event Coordinator Rodney Whaley said the overall atmosphere of the Roots Ball was better than hoped and all the expressions he heard from visitors and performers alike made for sweet music to his ears. He’d hoped for a South-By-Southwest vibe and he got it in folds. He credits a community effort, meaning from the town, the performers and all who were a part of making it happen.

“Well, it was a success. I believe with our transition to the new location, we are getting the bugs worked out,” he said. “I could not have been happier with the talent, crowd, vendors, and all the volunteers.”

Kicking off last Friday night with RDO Smokewagon followed by the Redgrass String Band, you couldn’t have had a better summation of the range of roots on display this weekend. It was a lure for many of the performers later in the weekend to come out and enjoy the vibe.

From Cade Roth and Ryan Joyce from Cade Roth & The Black Sheep, to Gannon Fremin and CCRev’s Tyler McCartney and Travis Julian hanging out it was as much worth it to be a fan as to perform. Each would get their turns later in the weekend.

The debut of RDO Smokewagon featured the vocals and rhythm guitar of Ryan Oldham joined by Zach Holliday on electric guitar and pedal steel, Brad “Red”Wolf on bass and Eric Hoffman handling the sticks. These guys knocked out a terrific set. It was so good they were allowed a couple of extra songs into Redgrass’ stage time.

When Whaley joined the band for the Cross Canadian Ragweed classic “Them Boys From Oklahoma,” he was joined by an audible chorus of fans who knew every word and belted ‘em like they were each Cody Canada. It was something special and, most of all, fun.

They made the most of it. It would be the first of multiple performances for Holliday and Wolf. The bassist returned for Saturday’s 7 p.m. slot with Cade Roth & The Black Sheep before the mighty Red Dirt Rangers closed out the night with a barn-burner of a show.

Holliday joined Wolf on Saturday night with Roth and company and helped close out the festival Sunday night with James Cook. This is the stuff musicians live for.

But, let’s return to Redgrass String Band’s closing set on opening night. With banjo, acoustic guitar, fiddle and upright bass, it was all about the roots. Whaley said that’s what it was all about and he was happy to gather some, if not local in the truest sense of the word, at least local to Medicine Park’s stages to flesh out the bill.

“We’re the Redgrass String Band from the Oklahoma Territory,” he said.

Their ultimate in Americana takes on Johnny Cash’s “Folsom Prison Blues” and the Leadbelly/Nirvana classic, “Where Did You Sleep Last Night?” got deep into the roots of American music but through their unique lense. Tackling Merle Haggard’s “Mama Tried” and segueing into Tom Petty’s “I Won’t Back Down” seemed as natural as if they’d written them.

Check out this take on the Turnpike Troubadours number “Down Here”: https://youtu.be/Ucrb3Zzzbzo

Saturday’s big opening of the festival was something to behold. With the weather cooperating and talent on deck, Saturday lived up to its special potential.

The first two notes strummed by Jarod Grice on his guitar brought a standing ovation from the music hungry audience.

The main stage warmed up from noon to 3 p.m. both days at the B/S Productions stage near Bath Lake, the cowboy poets and singers at Mrs. Chadwick’s Bakery and the lineup of singer/songwriters at the stage run by Kerry Hartman and Sarah Wright at The Healing Clinic. There was too much talent to truly take in.

Even at Santa’s Snack Shack, Dave Johnson was picking his guitar and packing a punch with his performance. His song called “Bath Salts” is still one of the most unique things I’ve heard in a while.

Back at the Main Stage, Lynn Moon was ready to make his electric guitar return after breaking his arm in the most mailman of ways. He made it through like a champ with his bandmates in East Cache Creek. Followed by Cade Roth & The Black Sheep’s trademark set, the night ended with a raucous return of the Red Dirt Rangers.

Whaley said the weather had been so great Saturday he’d leave his faith in Mother Nature to carry through for one more day. The festival continued and, according to the proud wrangler for the event, reached crescendo by Sunday night’s finale. He credited Jim McLinden with running one of the cleanest sound shows I’ve heard.

It leaves a little less than a month before the next big fest comes to Medicine Park. Whaley said each event at the new locale has been a learning process. But momentum continues in the right direction.

“Rockin’ the Park will be quickly upon us,” he said. “We are already working to make it more streamlined.”

Whaley said it’s all about the audience and he calls Medicine Park’s one of the best.

“I really appreciate everyone’s understanding and cooperation while we continue to make this better,” he said.